Grand Canyon history notes: A new bridge over the mighty Colorado is built 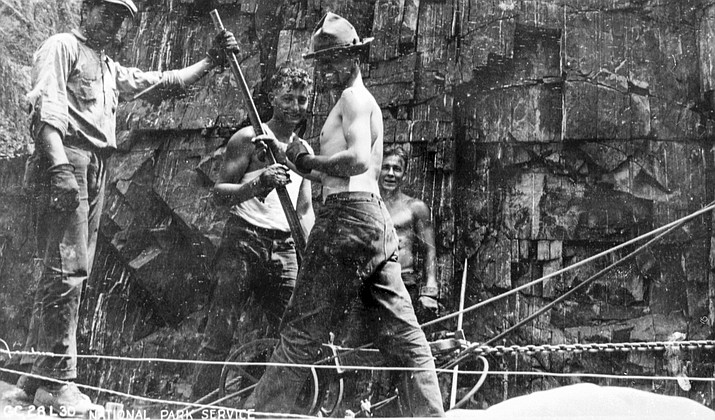 By 1928 it was obvious that a new bridge over the Colorado River was needed.

It was equally obvious that this would be no ordinary job.

The 1921 bridge danced in the winds that regularly came roaring through the inner gorge and on at least one occasion it was reported to have capsized.

The new crossing needed to be built to maintain rigidity in all conditions so as not to frighten (or kill) the many tourists that were expected to ride or walk upon it.

The structure was to be longer than any bridge within the National Forest or National Park Service — 500 feet between the supports- which, in turn, were to be anchored deep into the maddeningly hard “Rose Granite”.

Requirements were that the span would be able to support a pack train of any length as well as provide for congestion or stampede. 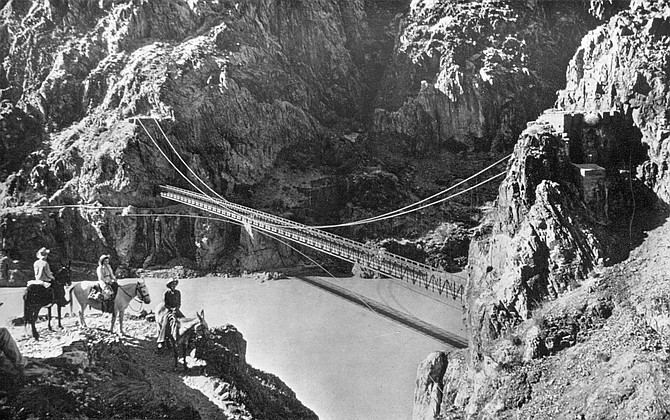 Riders descend to the Kaibab suspension bridge in 1928. (NPS photo)

• There are 67 tons of structural steel in the bridge.

• There was no piece of steel or other material dropped into the river.

• There were approximately 122 tons of material and supplies packed to the bridge.

• The new bridge will support all the live load that can be placed on it.

• For two full weeks there were seven packers, 42 pack animals and seven saddle animals packing to the bridge every day.

• It required three months to pack the main part of the bridge material and supplies and equipment to the bridge.

• The high line used on the bridge was the cable that formerly carried traffic across the river and upon which Theodore Roosevelt crossed. [Said line had previously been incorporated into the 1921 bridge]

With the bulk of the new bridge in place the main cables were adjusted for final position and the wind cables were connected to the wind cable guys and were also adjusted to their correct length. When these tasks were completed, the temporary field bolts in the truss were replaced with field rivets and the guardrails were bolted into position. There remained only the application of the "Laykold" surface and positioning the stiffing truss to the abutments.

The structure was now ready for traffic.

"The old bridge was then removed piece by piece, working both ways from the center. All material was carried ashore and stored in a pile for use on various other bridge projects."

Since 1922, when Phantom Ranch opened, ever-increasing numbers of visitors were clamoring to ride mules into the Canyon. It did not take long before the inadequacy of the first bridge became apparent; only one rider at a time was allowed to cross and the delay — while not the imposition that the old cable and cage presented-was nonetheless prolonged and irksome.

“Your letter of December 3rd regarding proposed Kaibab Trail suspension bridge is at hand and we have given it a great deal of study.…we have within the last few days received allotment advice No. 253, which includes $48,000 for immediate construction of this structure.”

A camp accommodating nine skilled laborers and an (all-important) cook was established at the confluence of the Colorado River and the Bright Angel Creek — later the crew was increased to 20.

Construction commenced on March 9, 1928. The site selected for the new structure was about 16 feet directly over the 1921 bridge, the use of which was uninterrupted throughout the duration of the project.

Work began with the building of the north anchorage. Into the granite were sunk a pair of pits — 14 feet for the upstream anchorage and four feet for the downstream one.

So as not to disturb the moorings of the old bridge, extreme caution, even delicacy, was exercised in the use of explosives and machinery. After forms were built and concrete poured and set, steel was put in place and much of the displaced rock was used as fill over these forms. 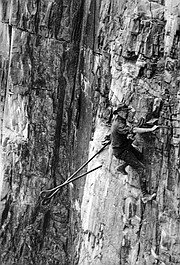 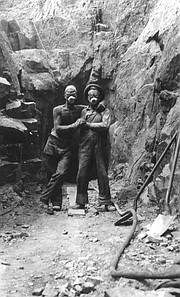 John H. Lawrence, Construction Engineer for the project, estimated that, “… the north cable anchorage is good for a resistance to horizontal tension of over 400 tons, and a vertical uplift (of) 150 tons”.

Now, the north cable supports, north approach and north abutment could be readied. Work on the south anchorage pits, cable supports, and approach also progressed and a storage yard, assembly platform, and canvas-covered blacksmith shop were set up at the foot of the South Kaibab Trail.

Work was also begun on the south approach tunnel with excavation commencing at both the north and south portals simultaneously. The compressors used for this project were not entirely adequate and, eventually, it was decided to add another shift working 6 p.m. to 2 a.m. in an attempt to make up for the delays. When finished, the tunnel ran 105 feet with the north portal leading directly on to the bridge.

The extraordinary location of the span made for some interesting logistics:

• Mules and men would facilitate the transportation of all resources to the construction site; in fact, the ultimate costs of transporting materials would exceed the costs of fabricating them.

• Dangerous work would be done at locations high up on vertical granite walls with the (pre Lake Powell) Colorado River thundering below.

• With 500 feet between supports and a walking surface of 440 feet, the bridge would be longer than any other within the NPS or FS systems.

• Given the nature of the cliffs and rock located at both ends of the bridge site, there would be no need to construct cable towers, instead, concrete footings set into the solid rock would support the main cables.

Attachment of the hanger cables began at the south end of the bridge. As the hangers were placed, aligned, and attached, a group of six men would carry onto the old bridge-directly in position below the new span-a transom assembly (consisting of a floor beam and two verticals). Once carried to the proper location the transoms were hoisted by means of tackle sets and attached to the hanger cables. The riggers suspended high above, would then permanently attach the transoms to the main cables. As the transoms and hangers were connected, structural workers at the assembly platform near the south portal of the tunnel were assembling and riveting steel floor beams and plates for placement and installation.

Carefully, though not so slowly, the bridge began to take shape. The presence of the old bridge certainly assisted in the construction (especially with the transoms) and for a while there existed an irony in that the old structure was invaluable in the creation of its successor…which would hasten its removal.

The width of the span (5 feet) was chosen with consideration to the movement of mules. It was felt that a narrower walkway would interfere with the pack loads and that a wider one would allow the animals to potentially maneuver enough to turn around and cause much confusion. Because of the bridge’s isolation, it was decided to construct the flooring in a manner that would warrant a minimal amount of maintenance. To that end the flooring system was made up of flat steel plates, ¼” thick, riveted directly to the floor beams and girders. On top of this system was spread a layer, 2” thick, of an asphaltic concrete called “Laykold”, that would provide a durable surface and sure footing for pack and saddle animals.

(Today this material is long gone. Instead, there now exists a thick layer of rubber atop wooden planks resting on the aforementioned steel plates.)

Approaching the bridge in any fashion, hikers, riders, or boaters, are struck by the graceful wind cables (or, side sway cables). After delivery by train at Grand Canyon the nine hundred foot long cable was trucked to the Kaibab Trailhead and cut to length there. A “go-devil” in the fashion of a sled with iron wheels was built to transport the cables down the trail

The remarkable and well-known instance where 42 men walked down the main suspension cables, centipede style, was employed just once- due to time pressures; it took only a long day for the crew to walk the cables down. Because it was not necessary to transport the wind cables as quickly, it was decided to sled them down. Additionally, this method was favored because it saved a considerable amount of revenue since mules work cheap.

The location of the south upstream wind cable anchorage was especially problematic.

“It was necessary for the jack hammer operator to hang in a sling from two ropes one hundred and twenty five feet below where the rope was secured and with a seventy foot sheer wall to the river below him,” said Engineer Lawrence.

Work continued into the summer of 1928 and throughout this time the old bridge remained open to foot traffic.

Upon the completion of the project in February 1929, Lawrence wrote in his final report that there were no serious injuries during the construction.

“There were no serious injuries on this construction job, the most serious being a broken bone in a rigger’s foot,” he stated.

To read this article and related historical articles by NPS visit https://www.nps.gov/articles/bridgeworthy.htm