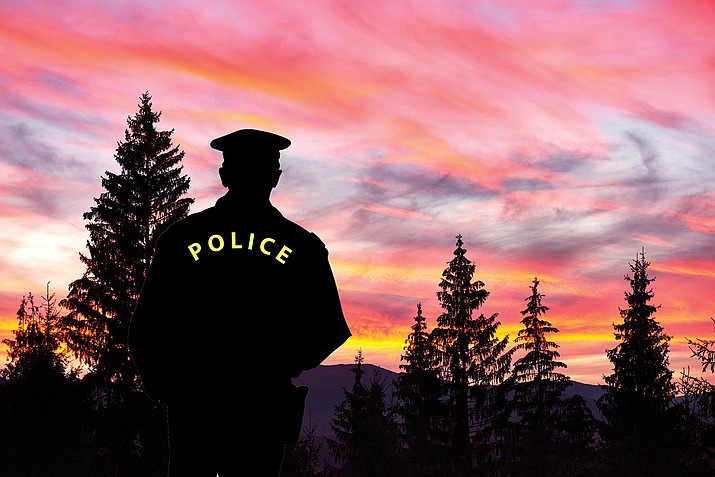 Rural aw enforcement departments are under pressure as they cope with social unrest and the coronavirus pandemic. (Graphic/Wendy Howell/Adobe stock)

WILLIAMS, Ariz. — Since Memorial Day, when law enforcement officers in Minneapolis were responsible for the death of George Floyd, a 46-year-old black man, who died when officer Derek Chauvin pressed his knee into Floyd’s neck for more than eight minutes, civil unrest has permeated the country.

With subsequent protests in cities around the world, law enforcement agencies are reeling as they not only evaluate their own programs for racial bias and disparity, but are faced with the repercussions of a national movement of hatred toward the police.

In addition to that critical eye, law enforcement departments are in the middle of coping with the coronavirus pandemic, which has forced officers into another role of enforcing state-wide mandatory mitigation efforts while putting their own health at risk.

So in a small community with a handful of officers, how is a rural department faring?

“This has been the roughest six months of my 39-year career,” said Williams Police Chief Herman Nixon.

In a community with 3,500 city residents and another 4,000 in outlying areas who call Williams home, the Williams Police Department responded to nearly 15,000 calls for service in 2019.

“Williams is a great place to live, but we have just as much crime as other cities our size,” Nixon said. “We are right off a major thoroughfare and we deal with things a lot of people aren’t aware of if they’re not involved in it.”

Although the department hasn’t received a complaint about racial bias in the past five years, Nixon said the department is not immune to the effects of the Black Lives Matter movement.

“Williams is a diverse community,” Nixon said. “We just don’t see a lot of racism in Williams. Everyone gets treated the same. But the anger toward law enforcement right now is very difficult to handle.”

Nixon said officers in Williams are heavily screened during the hiring process, which includes looking at the officers’ financial situations, bankruptcies, criminal records, alcohol and drug use and social media accounts.

Once hired, officers attend training that includes de-escalation, and awareness of racial bias and diversity.

“If you are going to be an officer, you have to have a high standard,” Nixon said. “You don’t get rich being a cop, and you get treated like .”

“I’ve seen officers now afraid to pull that trigger when they should, especially if it’s a minority,” he said. “They have to make those split second decisions every day. I’ve been fortunate that I’ve never had to shoot somebody in my 39 years. Ninety percent never have to.”

In addition to the concern of racial bias backlash, Nixon said the biggest impact for law enforcement locally and nation-wide is recruitment.

“Why would anyone want to be a cop now?” he asked.

Although the city of Williams has furloughed and terminated some employees because of the economic impacts of the coronavirus pandemic, the city did not eliminate any of the police department positions.

However, Nixon said he has had a difficult time finding candidates.

“Our council was gracious enough to give us two spots back because we are so busy, but we’ve only gotten one application,” he said.

Nixon said after speaking with colleagues in other departments, this has become a wide-spread problem.

“You do it because you have a passion for it,” he said. “But now we’re all hearing the same things, ‘I won’t be a cop’.”

Nixon said another impact from the Black Lives Matter movement, is the possibility of new state mandates.

“We got ahead of the curve by having our officers wearing cameras already and have cameras on their guns,” he said. “But if they start mandating logs of minority stops or other things, our staff just won’t be able to handle it. You can’t blanket every department in the state. We are all different.”

The coronavirus pandemic has added another layer of stress to the department, Nixon said.

“It has changed a lot of things,” he said. “I’m concerned for officers, the civilian staff and their families, and now we just can’t be the wide-open place for people to come to right now.”

One Williams officer so far has acquired the virus but has recently recovered. The officer believes he was infected when transporting a COVID-positive inmate to Flagstaff.

Nixon said from the beginning of the outbreak, he knew law enforcement officers were a high risk for catching the virus.

“There’s not a lot we can do (to protect the officers),” he said. “It would be nice if every time they got out of the car they put on their masks and gloves, but we just can’t do that. We had a call the other day where the officer responded to a call, rolled up and the fight was on.”

Nixon said calls are up nearly 50 percent for domestic violence, attempted suicide and intoxicated subjects since the virus hit the state in March and closures began.

“We are dealing with people who are scared out there, we have people who are unemployed,” he said. “People are staying together in the same house and it’s not working out well.”

Nixon said officers are also having to deal with residents who are deeply afraid of contracting the virus.

“They won’t roll their windows down during a traffic stop until the officer puts on a mask and gloves,” Nixon said. “These young officers are having to adapt to a different way of doing things.”

Although Gov. Ducey has issued mandates for social distancing, masks and other safety measures for the pandemic, Nixon said his department is not enforcing them.

“We go out and educate people, but we aren’t taking enforcement action,” he said. “We are not going to arrest somebody for not wearing a mask. I’m not going to make criminals out of otherwise law abiding citizens.”