Arizona universities plan to hold classes on campus in fall 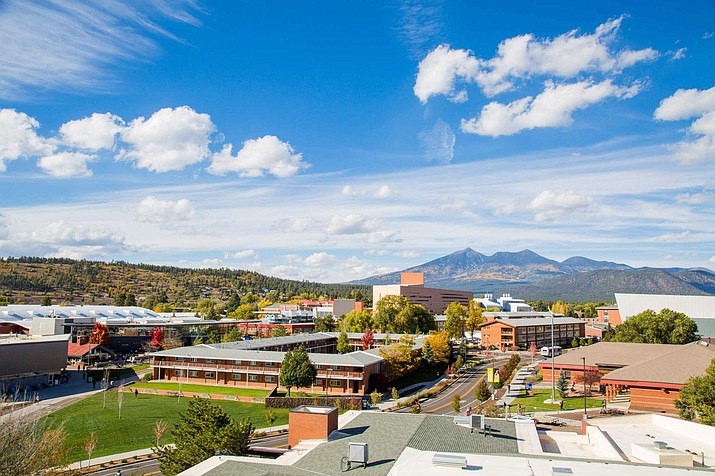 PHOENIX (AP) — Arizona's three universities plan to hold classes on campus this fall with precautions to limit the spread of the coronavirus, the presidents said Thursday.

Michael Crow of Arizona State University, Robert Robbins of University of Arizona and Rita Cheng of Northern Arizona University said they would follow recommendations from state and local health authorities when their classes resume in August.

"While risk factors cannot be eliminated entirely, we believe we can decrease the risk to health and safety through a variety of measures," Cheng wrote in an email to students and staff.

Cheng said the campus reopening plan will include testing for COVID-19 and tracing the contacts of people who test positive. The Flagstaff university will create social distancing policies in public areas and classrooms, and will implement safety and health measures in residential and dining facilities, she said

Administrators will also seek more space to house bigger classes so students can maintain distance from one another, Cheng said.

Crow and Robbins did not detail the changes they are considering, nor did they say whether students would be invited to live on campus.

"We will communicate to you throughout the summer about how those recommendations may impact future decisions and modifications to campus life this fall," Crow wrote in an email to students and staff.

Robbins previously said there could be options for a hybrid environment on the Tucson campus in which classes are offered through a mixture of face-to-face and online instruction.

He has announced plans to offer antibody testing to everyone on campus that will show whether they have ever been infected with COVID-19. Scientists are hopeful that people who recover from the disease will have some level of immunity, but research has not yet determined whether the antibodies will prevent infection.

ASU's Tempe campus is one of the largest college sites in the country with 53,000 students. The university has another 22,000 students on its other campuses in Mesa and Phoenix.

The state of Arizona on Thursday reported 16 new deaths from the coronavirus and 446 new cases. The big jump in cases is likely a reflection of increased testing.

Deaths were reported in Maricopa and Mohave counties, as well as Coconino, Navajo and Apache counties that are home to the Navajo Nation. The tribe has worked aggressively to contain a severe outbreak of the disease.

The Arizona Department of Health Services tracks confirmed cases. But a lack of testing and the fact that many people have few or no symptoms means the number of cases is likely much higher.

Gov. Doug Ducey on Wednesday extended his stay-at-home order through May 15 but said he will allow some nonessential retail businesses to reopen with health precautions. The Republican governor said there are signs the spread of the new virus has slowed in the state, but there's no clear indication that deaths and new cases are trending down.

The state plans a testing blitz over the next three Saturdays, aiming to test as many as 20,000 people each day.

A death row inmate became the third prisoner in Arizona prisons to die from the coronavirus.

Alfonso Raymond Salazar died Thursday at a hospital from complications of COVID-19, said Dale Baich, a federal public defender whose office represented Salazar in an appeal.

The Maricopa County Medical Examiner's Office is examining Salazar's death and hasn't yet determined a cause of death. The Department of Corrections, Rehabilitation and Reentry didn't immediately return a call Thursday evening seeking comment.

Salazar was sentenced to die for murder and kidnapping convictions in the 1986 death of 83-year-old Sara Kaplan in Pima County.

Before being taken to the hospital on April 21, Salazar was housed at the Florence prison, which accounts for 35 of the 50 cases of the coronavirus cases in state prisons.

Salazar was the first Arizona death row inmate to die from the virus. Seven other death row prisoners have tested positive for COVID-19, said Baich, who leads death penalty appeals in the Federal Public Defender's Office in Arizona.

For most people, the coronavirus causes mild or moderate symptoms, such as fever and cough, that clear up in two to three weeks. But it can cause more severe illness, including pneumonia, and death for some people, especially older adults and people with existing health problems. _ Associated Press writer Jacques Billeaud in Phoenix contributed to this report.