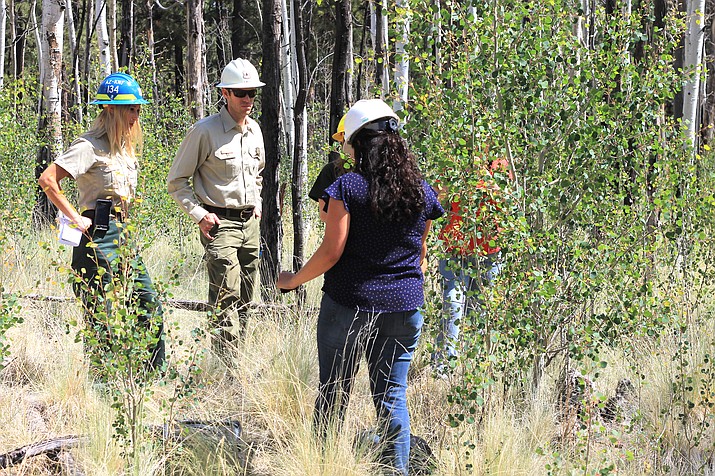 The treatments are not only intended to help limit the spread of the insects in specific locations but also to inform research to aid in the long-term preservation of healthy aspen stands across the Southwest.

Oystershell scale is considered by many experts to be an emerging invasive species issue with the potential to severely damage or even destroy northern Arizona's aspen over the coming years unless successful treatment techniques can be developed. Research into the biology and management of the species is considered critical for the future of aspen.

"Oystershell scale is one of the most damaging insects to aspen we have recently found," said Michael Sedgemen, silviculture forester for the southern two districts of the Kaibab National Forest. "We were already seeing a steady decline in Southwest aspen stands due to a number of environmental factors. With the rapid increase in activity of oystershell scale over the last few years, aspen could permanently be removed from the landscape if solutions aren't found."

Oystershell scale are tiny, armored insects that live under protective covers on soft twigs or bark of their host plant. Mature scales are about one-eighth-inch long and are the general shape of an oyster's shell. The insects' hard, protective coverings, which are constructed of wax, shed skins and other substances, are exceptionally difficult to penetrate, making treatments such as insecticide spraying more challenging on a large scale.

The tiny insects feed on their host plant with mouthparts that are several times longer than their bodies, enabling them to consume large areas of plant tissue. Oystershell scales can quickly overwhelm their host, even though they may not immediately be noticeable due to blending in well with the underlying bark. As the number of insects increase, an extensive crust of scales develops that can entirely encircle the trunks of host trees, and injury symptoms including dying limbs, tree tops and whole trees rapidly ensue.

Kaibab National Forest managers are documenting expanding acres of heavily scale-encrusted trunks and dead or dying trees in many aspen stands on the forest's south zone. With only about 2,000 total acres of aspen in these areas, tree specialists and researchers are eager to gain as much information as possible on how to effectively manage oystershell scale and preserve aspen on the landscape.

"Aspen research and management have a long history in Arizona. Given the previous research, we have an understanding of the role of native insects and pathogens, and ungulates, on aspen reproduction," said Kristen Waring, professor of silviculture at Northern Arizona University's School of Forestry. "Our current work with silvicultural strategies on both the Kaibab and Coconino National Forests will complement other oystershell scale research being conducted at Northern Arizona University, with the goal of adapting current management strategies to account for this emerging invasive species issue."

As part of the research effort, a study being conducted on both the Kaibab and Coconino National Forests seeks to quantify the effects of various silvicultural treatments, which are treatments applied to change the condition of trees and stands, on oystershell scale infestations.

The area to be treated on the Kaibab National Forest covers 21 acres within aspen exclosures in Spring Valley about 7 miles north of Parks. About half of the 21 acres will be treated by removing overstory aspen trees, known as a clearfell treatment, while the remaining untreated acres will serve as research control plots. The clearfell treatment is intended to remove infested trees while also stimulating regeneration of aspen.

Representatives from the Kaibab National Forest, Forest Health Protection and Northern Arizona University, along with expert sawyers and volunteers from the Arizona Elk Society, plan to begin implementation of the study's treatments in Spring Valley as early as the beginning of April. Different prescriptions are being implemented within aspen stands on the Coconino National Forest so that treatment results can eventually be compared.

"Ultimately, we hope to find techniques that forest managers can use to reduce mortality and decline of aspen from oystershell scale," said Connor Crouch, a Ph.D. student in the School of Forestry at Northern Arizona University.

The presence of oystershell scale in northern Arizona's forests has been a relatively recent phenomenon, according to Amanda Grady, forest health entomologist with the Forest Service's Southwestern Region. While they have long been a problem in some ornamental tree species in urban areas, they were only observed across local wildlands within the last several years.

Because of this, existing studies of the insect have almost exclusively focused on ways to treat infestations in the urban environment or in agricultural crops grown for profit. While there have been some treatment successes on these smaller scales, their applicability to and effectiveness in the vast expanses of national forests and other wildlands is largely uncharted territory for researchers and land managers alike.

"We have been experimenting with various treatments over the last few years, including physically scrubbing the scales off all of the aspens within a particular stand," Grady said. "This strategy is good for a homeowner with few infested aspens on their property but not across infested landscapes."

Forest Health Protection provides funds and coordinates work with national forests across Arizona to help evaluate and prioritize aspen stands for treatment. Two years of intensive monitoring has indicated that oystershell scale is a more extensive problem, affecting many areas in central Arizona.

"This is why research on various treatments across a variety of settings and circumstances is critical to helping us develop guidelines and treatment protocols for the future," Grady added.

Oystershell scale isn't the only threat facing northern Arizona's aspen stands. For the last 15 years or more, forest managers across the western United States have increasingly observed the rapid decline of aspen.

The decline has been especially pronounced on the southwestern edge of the tree's range, which includes Arizona. Factors such as drought, conifer encroachment, ungulate browse, fire suppression, insects and disease likely contribute to the decline of aspen and lack of successful regeneration.

Research findings from the current silvicultural treatment studies are anticipated to be publicly available in fall 2021, according to Crouch. In the meantime, members of the public can help researchers and forest managers by leaving all cut aspen in place within the aspen exclosures.