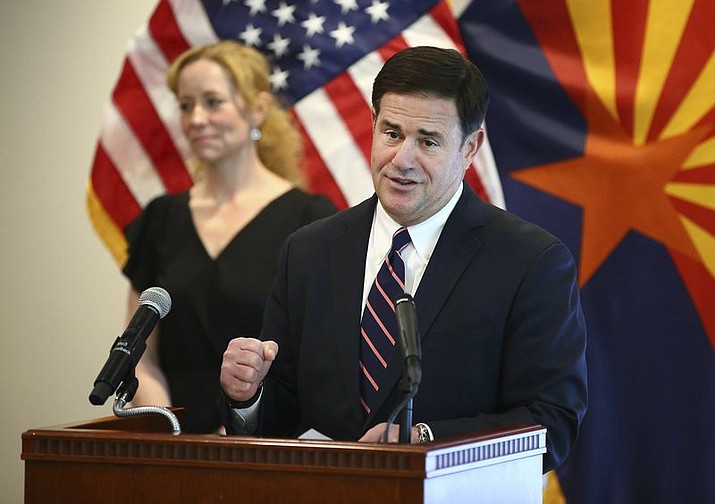 PHOENIX (AP) — Arizona Gov. Doug Ducey said Wednesday he's not yet ready to announce an end to his statewide stay-at-home order designed to slow the spread of the coronavirus, but he will allow hospitals to resume elective surgeries on May 1.

The Republican governor said his decision on whether to extend the order set to expire April 30 will be based on what he sees in the virus data next week.

"We do not want to lose the ground that we have gained," Ducey said. "I want to get back to where we were as much as anybody in the state. But I want to do it in a safe and healthy way."

The governor said he could continue the order, modify it or allow it to expire. It was put in place March 30.

"To do that, I'm asking for some patience, continued cooperation and partnership," Ducey said.

Ducey did announce that he would allow hospitals to restart elective surgeries on May 1. That's possible because hospital capacity to deal with a possible surge of virus cases is in place and supplies of masks, gowns and other personal protective equipment is better than a month ago.

Hospitals have taken a financial hit from the elective surgery ban imposed on March 19, with the state hospital association saying they were collectively losing between $430 million and $575 million a month. Hospitals planned furloughs, pay cuts, forced vacations or other measures to reduce costs as revenue has plummeted by as much as 40%, according to the Arizona Hospital and Healthcare Association and hospital chain officials.

Ducey acknowledged pressure from people to immediately reopen the state economy that has been hammered by layoffs and the shutdowns he ordered. Schools are closed, bars, restaurants and movies theaters are shuttered, and mass gatherings are banned. Nearly 420,000 Arizonans have filed for unemployment benefits in the past month.

Arizona health officials reported 229 COVID-19 deaths statewide as of Wednesday, the second day in a row that the reported number of deaths increased by 21. The state Department of Health Services also reported there were at least 5,489 cases statewide, an increase of 208 from Tuesday.

More than a dozen residents at Pennington Gardens, an assisted living facility in Chandler, Arizona, have died of coronavirus complications. They were among 28 residents who tested positive, a facility spokeswoman said.

"Our condolences and hearts go to the families of these residents. We are grieving each one as we have cared for them," she said.

"We have had adequate personal protective equipment on hand and regularly provide employees training on its use. We continue to be proud of the efforts made by those team members that have dedicated, at risk to their own health, to caring for the residents," Fahoum said.

Facility managers have been working with health officials and primary care physicians to test remaining residents and employees, and most residents have already received testing results, she said.

"As we've discovered, even elders can be positive for COVID-19 and not display any symptoms; making the depth and breadth of cases difficult to ascertain," Fahoum said.

Pennington Gardens had preventive measures in place at the facility and has taken precautions over the past six weeks, officials said. Essential staff and visitors are the only ones permitted inside, residents are eating in their apartments rather than dining together, and each resident is being monitored for symptoms.

The infected residents and employees have been limited to the assisted-living portion of the facility, officials said, adding that no cases were reported in other areas, including the memory-care unit.

It is unclear how the coronavirus reached residents in the facility.

A large outbreak had previously been reported in a Tucson nursing home, and state officials have tracked cases in more than 80 Arizona assisted living and nursing home facilities.

For most people, the coronavirus causes mild or moderate symptoms, such as fever and cough that clear up in two to three weeks. For some, especially older adults and people with existing health problems, it can cause more severe illness, including pneumonia and death. The vast majority of people recover.

This story has been corrected to show that Compass Senior Living, not Compass Living, is the assisted living home management company, and that the 13 deaths were included in the 28 cases at the site.