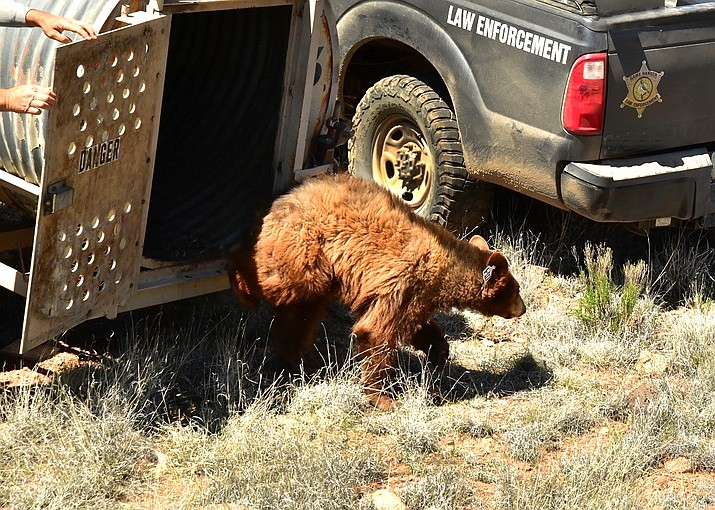 Three bear cubs rescued last April after their mother was hit and killed by a vehicle near Oracle, Arizona, were released back into the wild last week in a remote area in central Arizona. (Photo/AZGFD)

PHOENIX — Three bear cubs rescued last April after their mother was hit and killed by a vehicle near Oracle, Arizona, were released back into the wild last week in a remote area in central Arizona.

The release was conducted by the Arizona Game and Fish Department (AZGFD) in collaboration with the Southwest Wildlife Conservation Center (SWCC).

At the time of last year’s accident, the cubs, all females, were rescued by Arizona Department of Public Safety troopers with assistance from the Hayden Police Department, AZGFD, and a good Samaritan. They were transported by Game and Fish to the SWCC facility in Scottsdale for care, where they have been for the past year.

“Right now is about the time they would be leaving their mother and venturing out on their own, so we’re trying to simulate that as best we can in a controlled environment,” said James O’Brien, clinic manager and veterinary technician for SWCC. “We’ve minimized human contact in caring for them. They are big enough and ready to be released back into the wild.”

Before being released, the bears were tranquilized, given a health assessment, and each fitted with a GPS ear tag before being placed in the trailer that would carry them to the approved release site in a backcountry area.

The ear tags send tracking data to a satellite, which is then downloaded to a computer. This allows biologists to monitor the bears’ movements within their habitat, helping assist bear management in the future.

Game and Fish said this was a fortunate situation where releasing the bears back into the wild was a viable option. There are sometimes circumstances where cubs might be placed with a zoo or captive care facility, if space is available. Sometimes a bear must be humanely euthanized if it poses a threat to public safety.

“These female bears are healthy, have not posed a risk to the public, and have been cared for at SWCC in a manner that minimized the chance of habituation to their human caretakers," said AZGFD field supervisor Pat Crouch.

The three sibling bears will likely stay together until they get accustomed to their habitat, and then they’ll move apart on their own.

AZGFD and SWCC both emphasize that people can do their part to help keep wildlife wild.