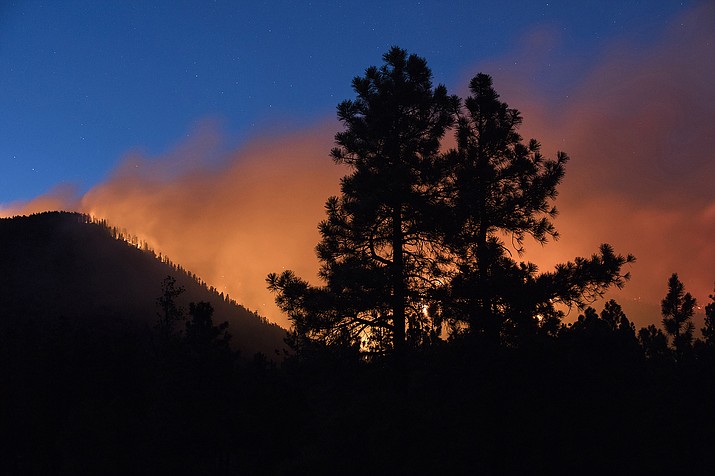 A wildfire burns through the Coconino National Forest, north of Flagstaff, Ariz. Arizona officials said April 9, that conditions in Arizona this year point toward a potential for high wildfire activity in the central part of the state and southward into desert areas where moist conditions during winter and early spring promoted growth of grasses. The state Department of Forestry and Fire Management said that outlook is based on conditions very similar to those of 2019. (Ben Shanahan/Arizona Daily Sun via AP, File)

PHOENIX (AP) — Officials say conditions in Arizona this year point toward a potential for high wildfire activity in the central part of the state and southward into desert areas where moist conditions during the winter and early spring promoted growth of grasses.

The state Department of Forestry and Fire Management said that outlook is based on conditions very similar to those of 2019 when 1,827 wildland fires burned nearly 625 square miles of private, state, federal and tribal lands.

Winter rain and snow increased growth of grasses, putting communities such as Wickenburg and Wittman in rural northwestern Maricopa County "at a higher risk for wildland fires," the department said Thursday in a statement.

The department said it plans to conduct patrols and stage crews in higher risk areas to enable fast initial responses. "The goal is to limit fire spread and activity and the amount of resources needed."

Three of every four wildland fires in Arizona in 2019 were caused by humans, the department said. "Therefore, it is now more important than ever the public utilize extreme care when doing any type of outdoor activity that involves fire."

Arizona's wildfires in 2019 included one that burned 3 square miles in the San Francisco Peaks that sent smoke plumes over Flagstaff but did not reach the city. Officials later concluded that fire was sparked July 21 by an excavator striking a rock during work on a forest restoration project.

Hundreds of firefighters aided by air tankers and spotter aircraft battled that blaze for weeks before it was contained Aug. 12.

The Rodeo-Chediski Fire in 2002 burned about 73.1 square miles on the Fort Apache Indian Reservation and adjacent national forest in eastern Arizona, destroying nearly 500 structures, including 465 homes, and forced the evacuations of several woodland communities. Part of that fire was intentionally set and another part was accidental.

The Wallow Fire in 2011, started by an unattended campfire, burned about 836 square miles on the Apache Sitgreaves National Forest in eastern Arizona and western New Mexico.

Tragedy struck in 2013 in Yavapai County in west-central Arizona when 19 firefighters perished in the lightning-caused Yarnell Hill Fire. The firefighters were trapped in a brush-choked canyon while hiking cross-country to protect the community of Yarnell where over 100 homes burned.

Last year was an unwelcome rebound from 2018 when 2,000 wildfires burned only 102 square miles on private, state, federal and tribal lands. A year before, Arizona had 2,205 fires that charred 656 square miles.

The interagency Southwest Coordination Center in Albuquerque, New Mexico, said in a March 31 presentation on the 2020 fire outlook that northern Arizona remained in severe drought.

Conditions have been more moist overall further south where growth of grasses and other small-diameter "fine fuels" that ignite readily and are rapidly consumed by fire have been normal to above normal, the center said.

Drier conditions will take grip by May and June and the monsoon is expected to be on time in July and normal overall, the outlook said.