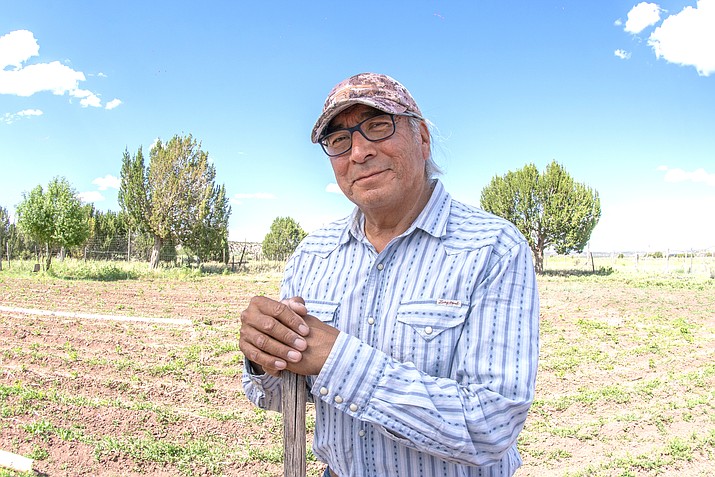 Jim Enote is a member of the Zuni Tribe. (Photo courtesy of Grand Canyon Trust)

The following Q & A is the first in a series that will be published in upcoming editions of Grand Canyon News. This series will feature tribal members from the Zuni, Navajo, Hopi, Havasupai and Hualapai tribes who will share what the Grand Canyon means to them as well as the history of the Grand Canyon from each tribal member's perspective.

GRAND CANYON, Ariz. — Jim Enote is just as at ease in a sport coat as he is in his muck boots. As both the CEO for a Native-led philanthropic organization called the Colorado Plateau Foundation and a traditional Zuni farmer, Enote has deep ties to the rivers, canyons, and desert lands that make up the Colorado Plateau. He’s born of the Corn clan, and for generations, his family has been living and farming in the Zuni Valley, in what’s now western New Mexico, a four hour drive from the south rim of Grand Canyon National Park. But there’s no question about where Enote and his ancestors comes from: the Grand Canyon.

Here, we talk with Enote about his cultural connections to the Grand Canyon, what the spiral petroglyph means, and his take on Covid-19.

What do you want people to know about the Zuni culture and your connections to the Grand Canyon?

The Grand Canyon is the place we emerged from. Chimik’yana’kya dey’a. We came from there to greet the Sun Father, emerged onto the surface. We lived in the Grand Canyon for many years and eventually traveled and explored all the tributaries of the Colorado River, learning and living and raising families, eventually settling here in the Zuni Village. We are some distance away from what people would think is the Grand Canyon. But that’s where the Zuni people began —in the Grand Canyon.

What drew the Zuni to settle in the Zuni valley?

Living in this landscape is obviously very dry. For thousands of years, water is what sustained the people more than anything. You could get by with a little bit of food but you had to have water. And in the Southwest on the Colorado Plateau, water is very rare and very precious. So Zunis settled in this valley because of the Zuni River for one, and also because of several artesian springs. And obviously we hope it’s going to rain. We never anticipate that it will happen. But when it does come, it’s very precious. So we have a relationship, in a sense, to conjuring up the powers of nature to bring rain. We all pray together. We are all part of a cosmological process. We all hope the sun will come up in the morning, and we all hope that the clouds will bring rain. So we pray, and we give thanks.

How are Zuni connected to the petroglyphs in the Grand Canyon and across the Colorado Plateau?

Petroglyphs are really kind of maps. We’ve always had maps — they’ve been etched in stone, they’re sung in prayers, they’re mentioned in many different orations, and they’re woven in textiles and painted in ceramics. One important one is the spiral.

What do spiral petroglyphs represent?

We see these spirals. They’re ubiquitous throughout the Southwest, especially on the Colorado Plateau. And what they mean is we’ve begun from one place, and we’ve explored, and explored. We’ve lived here and lived there, and lived many places. It’s about the people’s movement and migration. Finding a better place. Moving on. But also, I think it’s a metaphor for ourselves. That individually, maybe in our life, we go from living in one place, and maybe we take a job, or maybe we go to university. But that spiral goes inward, until we get to the middle, which really is our truth. And we find our truth in the middle of the spiral.

What relationships do the Zuni have to other tribes on the Colorado Plateau?

Our relationship to other tribes and the Grand Canyon is diverse and disparate, but it’s also a place where we have a union. We all have a different place where we call home. We all have different names for the Grand Canyon. But it is a place that we know is primoradial and elemental. It is a significant landmark throughout this region, and throughout the world. It is an incredibly important place and you can see it from space. It is the place that all the tribes have in common and they respect that place. It is a place that is deep into Mother Earth. And there’s water down there. It is like a womb. It is a mother for all the tribes in the region. That’s something we all have in common with the Grand Canyon.

What’s your first memory of the Grand Canyon?

I was with my grandparents, and we drove there, I remember. And my grandfather took out a cornmeal bag and walked to the rim of the canyon away from where there were other tourists and people. He walked to a private place, and he stood and prayed there. And he put cornmeal down. And I asked him, ‘why is that?’ And he said, “Lukya. Chimik’yana’kya dey’a” He said, “Here is that place that I told you about.” And then it felt like somebody opened the door into a very special place. A place I had heard about as a young child. This place they say is the Grand Canyon but we call Chimik’yana’kya dey’a. I heard about it for so long. I looked out and he said, “Yes, this is where it all began.”

What’s on your mind as coronavirus sweeps through our communities?

My lovely great-grandparents lived in the 1800s and part of the 1900s. They passed away when I was 17 years old. They were deep Zuni and helped me understand that we live in a world with different ways of knowing. Their way of contemplating the universe was beautifully without predictable logic yet connected to all things and processes and unencumbered with a written language and necessity to measure matter.

In my most difficult times, my great-grandparents told me this:

All creatures breathe in and breathe out an unseen and vital force.

Those creatures live all around us. They are below us, above us, and in all the waters of the world.

Many of those creatures have protuberances, wings, fins, arms, and legs that help them move from one place to another.

Like us, some creatures have eyes and ears to perceive things around them.

Like us, those creatures respond when the sun rises, and when winter becomes spring.

And like us, those creatures have power beyond their physical bodies. If we think of them, that is their power speaking to us.

All things vibrate and move. The ground sometimes shakes, and stars move across the sky. The earth and space above are the backbone of our world, and it, too, has power. We respect the power, we talk to it, and with collective ritual, we help to maintain a cosmological process."

In times of great difficulty and worry, remember this truth, we are never alone. All the creatures of the universe are not much different than us. We are all a family of beings. If we settle our nerves and enter the right frame of mind, we will conjure their powers, and nothing can undo us.

The Covid-19 situation is changing rapidly, and we will do our best to adjust. We will improvise and move forward. Above all, we are calm. We know, as a single species among many, we are not alone. All peoples, all beings, and the vastness of the lands, waters, sky, and distant galaxies are part of a collective magnificence that, like a beautiful story, will always play out and change but will remain the same beautiful story.