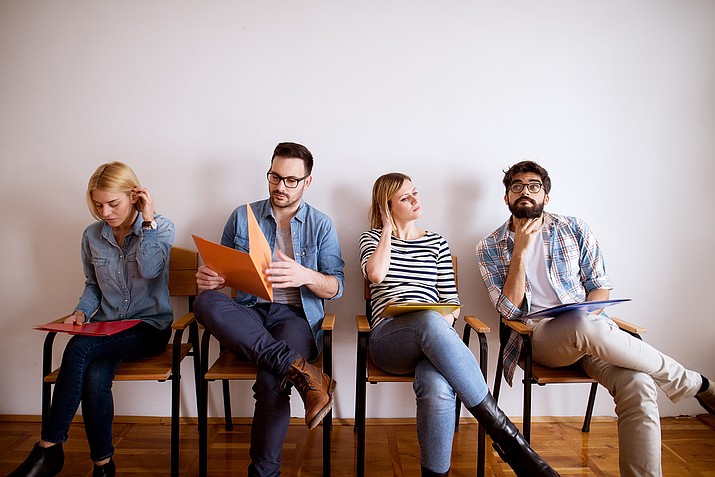 Arizona normally has about 3,500 claims a week, and the previous weekly record was just above 11,000 during the fallout from the Great Recession in 2009. (Adobe stock)

GLENDALE, Ariz (AP) — A tidal wave of unemployment claims triggered by mass coronavirus-related layoffs has inundated Arizona's unemployment insurance office, triggering telephone and internet filing glitches and processing delays that the agency promised to work through as quickly as possible.

Some callers have received repeated busy signals when they tried to call the agency or have been kicked off the state website while trying to apply for benefits because the massive traffic increase has overwhelmed the state's systems, Tasya Peterson, spokeswoman for the Arizona Department of Economic Security, said Wednesday.

The state had more than 28,000 claims in the week ending March 21 and nearly 89,000 last week, Peterson said. This week, officials project another 100,000 people will file unemployment claims.

The state normally has about 3,500 claims a week, and the previous weekly record was just above 11,000 during the fallout from the Great Recession in 2009.

Arizona is working to boost its unemployment claim filing system capacity and has increased the number of workers processing claims from 13 to 100. State officials are also reaching out for help from state workers with previous unemployment experience.

It normally takes 14 days to process a laid off worker's claim, Peterson said. The state has sent checks to about 15,000 people who filed during the first week of the claim surge. Gov. Doug Ducey, a Republican, waived the normal one-week waiting period for benefits and job search requirements on March 20.

Arizona pays a maximum of $240 a week to people whose unemployment claims are approved, but the $2.2 trillion rescue package signed by President Donald Trump last Friday adds $600 weekly to that amount for four months.

Also now eligible for unemployment checks are contract workers, the self-employed and others whose claims are not normally accepted. Arizona officials plan to update their systems to pay those workers but is awaiting final guidance from the U.S. Department of Labor.

That extra $600 per week will also take time to process after the state gets final Labor Department guidelines. Peterson said it isn't clear when those new guidelines will be issued but expect it to be soon.

Those workers should still apply now for benefits, Peterson said.

"When we do get the guidance, our goal is to get those monies out as quickly as we possibly can," she said.

Arizona's Department of Health Services reported Thursday that it had tallied 1598 virus cases and 32 deaths, an increase of 185 cases and three deaths from the previous day. A week ago, the state had 508 known cases with eight dead.

For most people, the coronavirus causes mild or moderate symptoms, such as fever and cough that clear up in two to three weeks. For some, especially older adults and people with existing health problems, it can cause more severe illness, including pneumonia and death.

Ducey and top state officials overseeing the response to COVID-19 will hold a one-hour town hall Thursday at 6 p.m. that will be broadcast on more than 60 television and radio stations statewide. Some outlets will also live-stream the program over the internet.