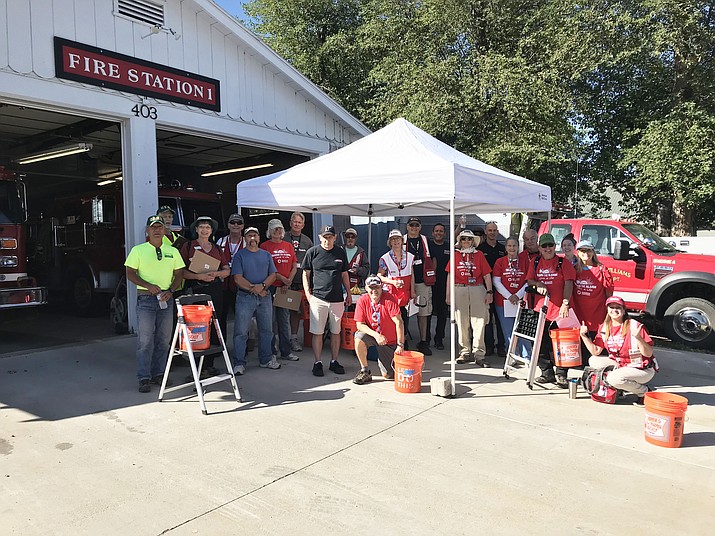 On Aug. 1, I-40 EB MP 167, WFD responded to a report of a brake fire on a semi-tractor. Upon arrival no fire was found in rear tires of trailer, but heat was present. Firefighters cooled the area with water. High Country Fire personnel also assited prior to WFD arrival.

On Aug. 1, N. Civitan Road, WFD was dispatched to assist with a 17-year-old male reported to have walked away from Camp Civitan and was missing. Patient reported to be mentally disabled and had been gone for two hours upon dispatch. CCSO coordinated search. Patient found during search operations.

On Aug. 3, Perkinsville Road, WFD was dispatched for an RV on fire at mile marker 182. Firefighters arrived on scene and fire was extinguished prior to department’s arrival. Vehicle was checked and no further action was needed.

On Aug. 3, Airport Road MP 2, WFD was dispatched for smoke seen east of airport and north of Love’s Travel Stop. Area was checked and nothing was found.

On Aug. 14, E. Franklin, WFD responded to report of an aggressive swarm of bees next to the sidewalk in a hollowed out tree trunk. Fire personnel pulled hose reel and used class A foam to try and flush out queen bee.

On Aug. 14, E. Franklin, WFD returned to same location after report that bees were still a problem. Firefighters arrived and verified bees were still being aggressive and used AFFF Foam to exterminate bees.

On Aug. 15, W. Route 66, WFD was dispatched for gas smell outside the door at Williams Police Department. Fire personnel arrived on scene and were unable to find gas smell or source of leaking gas.

On Aug. 16, I-40 WB MP 169, WFD was dispatched to a two-car accident and report of an elderly male with an arm trapped under the vehicle. Patient had been removed from vehicle upon arrival. Patient was transported to FMC.

On Aug. 17, N. Grand Canyon Blvd, WFD responded to an initial report of second floor smoke alarms going off. Arrived on scene, no smoke was showing and all occupants were out of the building. Alarm panel had reset and was showing no activations. Fire personnel completed walk through and found nothing.

On Aug. 19, W. Route 66, WFD was dispatched for an out-of-control barbecue fire pit. The metal smoker outside of Cruiser’s restaurant was reported to be on fire. Upon arrival fire personnel found smoker producing flames from internal cooking area. No exposures were at risk. Firefighters extinguished the flames with water and overhauled smoker. Smoker was full of pans of items being cooked. Department advised manager that entire smoker had to be cleaned before being operated again.

On Aug. 19, W. Route 66, WFD responded to report of smoke from a hotel room. Upon arrival firefighters found no fire, but sanding work was being done in the hotel room. No hazard was present.

On Aug. 20, S. Perkinsville Road, MP 184, WFD responded to a report of a possible rollover. While en route Lifeline Ambulance advised fire personnel they were not needed.

On Aug. 24, W. Route 66, WFD responded to a report of a diesel fuel spill. Fire personnel located spill on west side of the street. Approximately four gallons of diesel fuel spilled. Spill occurred when a truck with a satellite gas tank was activated by the family dog. Spill was covered in absorbent, removed and properly disposed.

On Aug. 24, W. Route 66, WFD responded to a report of gas odor in the vicinity of Safeway. Found no odors at Safeway, but located a gas hauler delivering fuel at Conoco directly behind. Confirmed odor as residual from tanker.

On Aug. 25, N. Grand Canyon Boulevard, WFD responded to an alarm at Love’s tire shop. Firefighters arrived to find fire/water alarm activated. Engine 8 was staged at front entrance and Engine 7 on side at hydrant. Occupants were cleared and a perimeter search began. An active sprinkler was found on side of shop with no signs of heat or fire. Suppression system was shut down, sprinkler head recapped and system flushed/charged. Proceeded with an active pull station alarm in zone 4. Firefighters could not locate any activated stations nor reset activation alarm on panel. Manager was instructed to contact alarm company to verify replaced head as well as fix malfunction in panel.

On Aug. 27, N. Sixth Street, WFD was dispatched for a 12-year-old male found awake and alert following witnessed syncopal episode. Patient was found supine on floor awake and communicative. Patient’s mother was present in the room. Upon arrival of Lifeline Paramedics fire resources were released from the scene.

On Aug. 21, Lieutenant Justin Sandoval conducted monthly training for fire personnel. Training included firefighters putting their hose and fire stream management skills to the test during a friendly barrel squirt competition. Engine operators used drafting techniques to deliver water while firefighters deployed water to move the barrel to the opposite side of the training field.

On Aug. 24, WFD worked with 20 volunteers from the American Red Cross, CERT and Coconino County to distribute and install 12 smoke detectors and eight CO detectors to Williams residents.

On Aug. 23, WFD launched fireworks for touchdowns at the first game of the 2019 football season for Williams Vikings. The Vikings defeated Anthem Prep 75-0.