Northern Arizona Astronomy: The universe in a different light 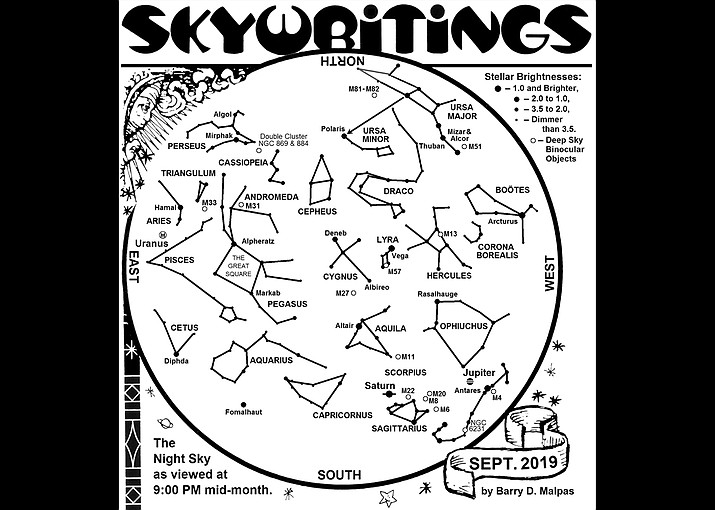 WILLIAMS, Ariz. — Since ancient times, people have observed the skies, but only in the visible spectrum (red-orange-yellow-green-blue-violet) and with only their unaided eyes.

In 1608, Galileo Galilei turned the newly-invented telescope toward the cosmos and discovered more detail than the eye alone can see, such as the moons of Jupiter, sunspots, the crescent phases of Venus and much more previously unknown information, but still only in the visible spectrum.

For over three hundred years, this was our only window to the universe.

In 1928, Karl Jansky, a radio engineer, joined Bell Laboratories in Holmdel, New Jersey. Bell Labs wanted to investigate atmospheric properties using short radio wavelengths of 10–20 meters for use in trans-Atlantic radio telephone services. Jansky was assigned the job of investigating sources of static that might interfere with radio voice transmissions and built an antenna designed to receive radio wavelengths of 14.6 meters.

After recording signals from all directions for several months, he eventually grouped them into three types of static: nearby thunderstorms, distant thunderstorms and a faint steady hiss of unknown origin.

Spending over a year researching the source of the third type of static, Jansky initially thought he was detecting solar radiation. However, the brightest point kept moving away from the position of the sun by 4 minutes every day and he finally concluded that it was coming from the Milky Way — the strongest signals being emitted from the constellation of Sagittarius at the center of our galaxy.

This was the birth of radio astronomy, in which scientists are able to determine aspects of our galaxy where visible light is blocked by interstellar dust while radio waves are not.

In 1964, working at Bell Labs, Arno Penzias and Robert Wilson were experimenting with a supersensitive, microwave horn antenna originally built to detect radio waves bounced off Echo balloon satellites, which required them to eliminate all types of interference from their receiver. In doing so, they were left with a constant noise that came from all directions 24 hours a day. After consulting with Princeton astronomers, they realized that they had discovered the three-degree background radiation left over from the Big Bang.

Fortunately for life on Earth, our atmosphere blocks most of these other types of harmful radiation. But unfortunately for astronomers, these other parts of the EM spectrum are invisible from Earth’s surface. Several gases absorb them, including water vapor, carbon dioxide, oxygen and ozone; hence, it was not possible to “see” these wavelengths until the 1960s, when technology enabled us to get above the atmosphere with high altitude balloons, rockets, and eventually, satellites.

The sun only emits gamma rays in solar flares, which were first observed from the OSO 3 satellite in 1967. Since then, a number of different processes occurring in the universe have been discovered releasing gamma-ray emissions, which include cosmic ray interactions with interstellar gases, supernova explosions and interactions of energetic electrons with magnetic fields.

Many types of objects emit, fluoresce, or reflect X-rays — from galaxy clusters, to black holes in active galactic nuclei, supernova remnants, to binary stars containing a white dwarf star and neutron stars, just to name a few. These all must be observed above the Earth’s atmosphere.

The ultraviolet universe, like other wavelengths, looks quite different from the familiar stars and galaxies seen in visible light. Most stars are actually relatively cool objects emitting much of their light in the visible or near-infrared part of the spectrum.

Ultraviolet radiation is the signature of hotter objects, typically in the early or late stages of their evolution.

The soon to be launched James Webb Space Telescope is a large, space-based observatory that is optimized for infrared wavelengths, which will enable scientists to look further back in space and time to find the first galaxies that formed in the early universe and to peer inside dust clouds where stars and planetary systems are forming.

Astronomers use various types of telescopes sensitive to different parts of the EM spectrum to study objects in space.

Even though all light is fundamentally the same thing, different wavelengths tell different stories about our Universe. But until we were able to get above the atmosphere, most of it was invisible to us.