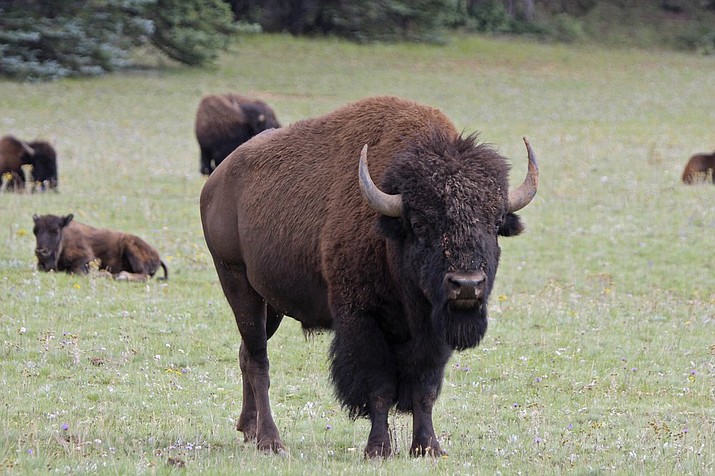 This undated photo provided by hunting guide Russ Jacoby shows bison in far northern Arizona. In the two years since Grand Canyon National Park approved a plan to reduce the bison herd, it has grown in size. (Russ Jacoby via AP)

FLAGSTAFF, Ariz. — In the two years since the Grand Canyon approved a plan to reduce the number of bison roaming in the national park, the herd has only grown in size.

No one is sure exactly how many of the massive animals call far northern Arizona home because they’re hard to count amid the Ponderosa pine trees, but it’s in the hundreds. Left unchecked, the herd could reach 1,500 in several years, severely damaging the landscape and water resources, the park says.

The reduction plan has been hampered by weather and disagreements over how to kill some of the bison if shipping them off isn’t enough. The Grand Canyon tried to round up some animals last year, but wintry weather set in and the bison headed farther north on a plateau.

The park is taking a second run at capturing this month.

“We’re getting a little late start,” said Jan Balsom, a senior adviser at the park.

The Grand Canyon bison are descendants of those introduced to northern Arizona in the early 1900s as part of a ranching operation to crossbreed them with cattle. The state of Arizona now owns them and has an annual draw for tags on the neighboring Kaibab National Forest.

The National Park Service released a plan in September 2017 that called for a mix of corralling the animals near the highway that leads to the Grand Canyon’s North Rim, and for skilled volunteers to shoot a certain number of bison inside and outside the park. It has made no significant progress on guidelines for lethal options.

The Park Service fenced off watering holes on the North Rim to try to force bison into the national forest, where they legally can be hunted. But it didn’t keep the bison out.

The 25 hunters who drew tags in a state hunt earlier this year came up nearly empty-handed, bagging just two animals. The Arizona Game and Fish Commission recently amended the spring hunts for 2020 and 2021 to give hunters more time overall to kill bison.

Meanwhile, the animals’ population is growing.

The park hopes to corral dozens of the animals at the North Rim, where the bison breed exclusively after hunting pressure forced them out of the forest about a decade ago. It uses thumb-size pellets to lure the bison into 8-foot-high corrals that can hold up to 100 animals.

Balsom said the park plans to sort animals that are captured in September and give them to Native American tribes across the U.S. that request them through the Intertribal Buffalo Council. The agreement with the Park Service says none of the animals can be slaughtered within the first year, she said.

Officials hoped to ship out 50 animals in 2018, but the bison left, traveling about a mile outside of the park boundary, bison project manager Miranda Terwilliger said late last year.

“We were ready to move them. It was a bummer to have to call it off,” she said.

The goal is to reduce the bison herd to 200 within five years, Balsom said.

The lethal option is contentious. A recording on a Grand Canyon hotline for information on the bison has said for more than a year that the park is still developing plans to allow skilled volunteers to legally kill the animals.

The state wildlife commission ordered the Arizona Game and Fish Department to cut off talks with the Park Service in January 2018 because it prefers hunters do the work and keep their prey, regional Game and Fish supervisor Scott Poppenberger said.

“That would be a substantial game-changer in moving the ball forward,” he said.

It’s a conflict that has played out in other national parks where hunting is banned.

In Montana, former Gov. Brian Schweitzer and state legislators over the years have urged Yellowstone National Park to allow bison hunting to keep a rare but contagious bacterial infection in check. The idea was met with stiff resistance from park administrators and has gone nowhere.

Under a 2001 agreement between federal and state officials, thousands of bison attempting to migrate to winter feeding grounds outside Yellowstone have been captured and sent to slaughter. Others are killed by state-licensed hunters or Native Americans who hold treaty rights to harvest the animals.

The hunts have stirred controversy, with bison often shot immediately after stepping beyond the park boundary. They have also failed to significantly reduce Yellowstone’s herds, which had roughly 4,500 animals at last count.

Most of the bison hunted in northern Arizona are killed within a mile of the Grand Canyon. Hunters use salt blocks to lure the bison into the adjacent forest, and track their movements on trail cameras and while sitting in camouflage tents.

Local hunting guide Russ Jacoby agrees the animals’ numbers should be reduced but said hunting should be part of the equation, in part to make the bison uncomfortable with life at the Grand Canyon.

“I’d like to get to a point where we can compromise,” Jacoby said. “We should be sport hunting bison in the park.”