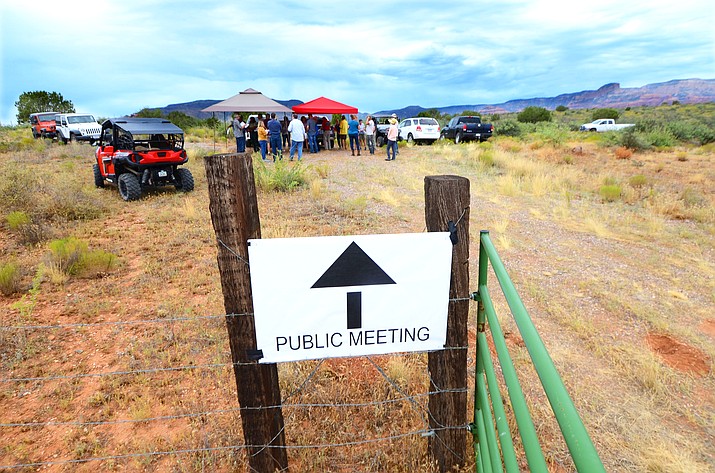 SYCAMORE CANYON, Ariz. — Under Canvas, the glamour camping company that proposed a 125-tent luxury glamping site at the end of Bill Gray Road, a remote area near the Sycamore Canyon Wilderness, said Sept. 13 it will submit its plan to Yavapai County for review, but will scale back the number of tents by 20 percent.

Under Canvas reduced the original plan based on feedback after an August community meeting where the company unveiled its development plans, according to a release by Caitlan Cullen, Manager of Real Estate at Under Canvas.

A community meeting was held Aug. 6 at the site where about 30 to 40 neighbors turned out concerned about the proposal overlooking Sedona Red Rock country and Sycamore Canyon Wilderness.

The community meeting is one step applicants need to do before they submit their PUD application with the Yavapai County planning staff, according to Yavapai County Supervisor Randy Garrison.

Under Canvas, a national glamping company, has proposed the glamping site on 82 acres about 11 miles from Cottonwood in a remote area at the end of Bill Gray Road in Yavapai County.

The site includes two acres of development with priority-designed tents, a central restaurant for campers and a social tent for campers, a main-fire area, water, sewer and gravel roads.

“During the application review process, we will have the opportunity to adjust the design and continue to receive and respond to comments,” Cullen stated.

There were 38 names of individual neighbors collected in the sign-in sheet, according to a meeting summary sent to neighbors in a follow-up by Ron Harris of Norris Design.

At that meeting, Cullen explained the tents will be built on platforms so grading under the tents will not be required, she said. The company provides home mattresses, comforters and pillows to provide for a luxury camping experience, Cullen said, adding that glamping would be a seasonal operation at this location and only open part of the year.

The Under Canvas glamping company was founded by Sarah and Jacob Dusek in 2009 and has glamping sites in Montana, Yellowstone, Zion, Moab, Grand Canyon, Glacier, Smoky Mountains, Utah and Mount Rushmore.

Cullen said that the main access point to their glamping site is going to be discussed with the U.S. Forest Service.

The majority of the vertical elements for the proposed camp are temporary in-nature and can be taken down at the end of the season, Cullen said in her statement.

The seasonally operated and environmentally conscious Under Canvas camp compared to a permanent development that could be permitted on the property would generate less traffic, have less water use and electricity usage with very limited land disturbance.

Cullen said her company has been working on this for a couple of months and has had a pre-application meeting with Yavapai County staff.

Garrison said he has not heard anything new about the Under Canvas application, but said that was not unusual. The proposal would go to Yavapai County staff and then the staff suggests any adjustments to the landowners.

It could take months before reaching the Board of Supervisors, he said.