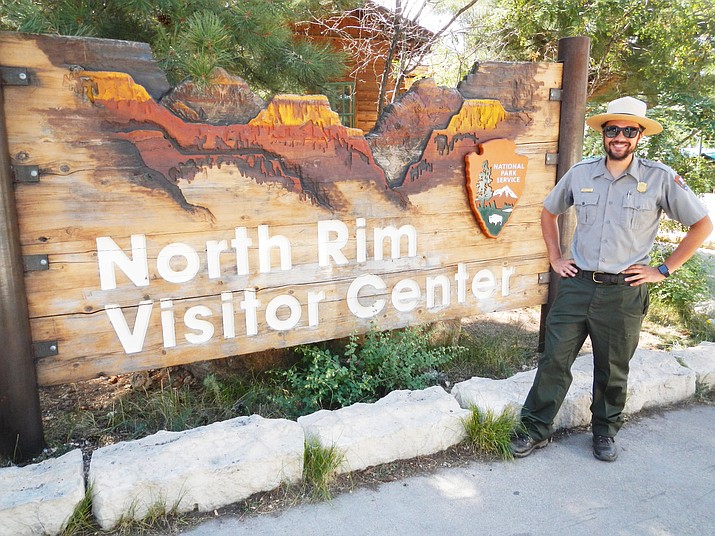 GRAND CANYON, Ariz. — Chances are, you’ve daydreamed about what it might be like to be a Park Ranger at Grand Canyon National Park. But did you ever stop to think that maybe your dog is dreaming of becoming a “Bark Ranger?”

That dream came true when the North Rim celebrated its inaugural “Bark Ranger Walk” for dogs.

Thanks to Park Ranger Daniel Willner, organizer of the event, dogs had the chance to be the focus of fun along the North Rim’s Bridle Path.

Mack, the first registrant for the Bark Ranger event on the North Rim. (Photo/Stephenie Slahor)

To participate, Bark Rangers had to have two of the important characteristics of the human Park Rangers — friendly and sociable. Their “pet parents” who would accompany them on the two-hour interpretive walk along the Bridle Path were asked to bring along water and snacks for themselves and their dog, waste bags, sunscreen and the Bark Ranger booklet given to participants.

The booklet explained that a true Bark Ranger knows that “Bark” stands for: B — Bag your waste; A — Always wear your leash; R — Respect wildlife (don’t chase those squirrels and lizards, and don’t go close to the mules); and K — Know where you can go (make sure your human keeps watch over you, and also knows where you are not allowed, such as on inner canyon trails).

Willner said Grand Canyon visitors traveling with their pets need to remember a few guidelines to keep the visit safe for their pets. For example, pets should not be left in vehicles or left tied alone outside a store or eatery. Paw protection is important when temperatures make the pavement hot. Humans need to be sure to keep their pets close when crossing roads or hiking near moving vehicles. And humans should be sure to have plenty of water for themselves and their pet companions.

The next North Rim Bark Ranger walk was scheduled for Sept. 20. Canines earn the special “Bark Ranger” Grand Canyon National Park dog tag in either the jingle-free plastic version or the metal tag—each with a ring for easy attachment to the collar or harness.

Dog Patch picks up business
Grand Canyon is dog-friendly, but beware the heat
Park barks up the right tree
Letters to the editor
Making your hike go to the dogs<br>