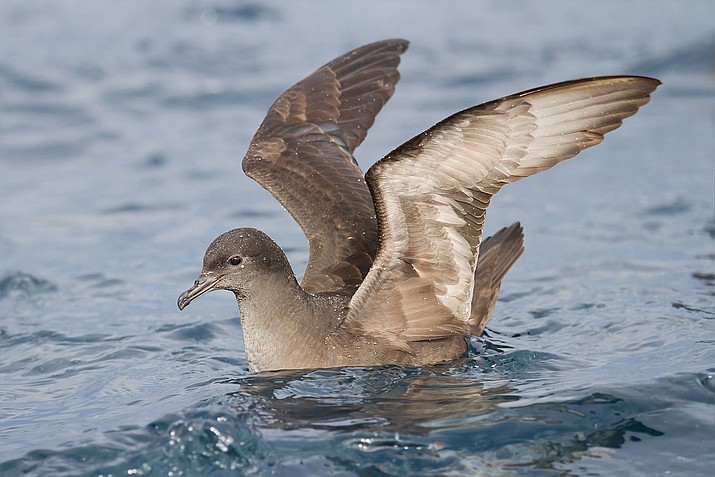 From late June to early August, thousands of Short-tailed Shearwaters were reported dead and washing up on beaches in the Bristol Bay region, or observed weak and attempting to feed from salmon gillnets in inland waters. (J.J. Harrison/Creative Commons)

ANCHORAGE, Alaska —In May 2019, the U.S. Fish and Wildlife Service and the National Park Service began receiving reports of dead and dying seabirds from the northern Bering and Chukchi seas, including near Bering Land Bridge National Preserve.

From late June to early August, thousands of Short-tailed Shearwaters were reported dead and washing up on beaches in the Bristol Bay region, or observed weak and attempting to feed from salmon gillnets in inland waters. By mid-August, the shearwater die-off had extended north, in smaller numbers but widespread locations, into the northern Bering and Chukchi seas along the coasts of Alaska and the Chukotka Peninsula of Russia. Puffins, murres, and auklets are also being reported, but at much lower numbers than shearwaters. Additionally, live Short-tailed Shearwaters have been observed in large numbers this August in the Gulf of Alaska, along the coasts of Glacier Bay and Kenai Fjords national parks, and bays of Kodiak Island. It is unusual to see this species in high abundance in these areas, as it is typically offshore and comes from the southern hemisphere to forage in the Bering and Chukchi seas during the summer and fall.

Historically, seabird die-offs have occurred occasionally in Alaska; however, large die-off events have occurred each year since 2015. Consistently, dead birds examined from the Bering and Chukchi seas during these recent die-offs were determined to have died due to starvation. Seabird carcasses from the 2019 die-off events were collected from multiple locations and sent to the U.S. Geological Survey National Wildlife Health Center for examination and testing.

Initial results indicate starvation as the cause of death for most locations. However, in southeast Alaska, exposure to saxitoxin (a biotoxin associated with paralytic shellfish poisoning) was linked in June to a localized die-off of breeding Arctic Terns. Analyses of tissue samples for harmful algal bloom toxins are on-going and results will be shared as they become available. To date there has been no evidence of disease.

The USFWS and NPS are coordinating efforts with local communities and other agencies.