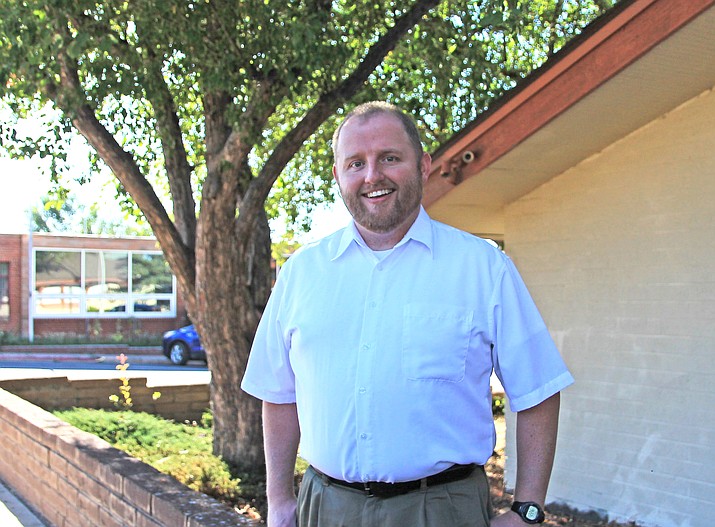 Chase Waggoner began his time as Williams city manager two weeks ago. Waggoner is originally from Missouri where he worked in city government. (Wendy Howell/WGCN)

WILLIAMS, Ariz. — Chase Waggoner has a heart for municipal government and said he hopes to continue his passion to serve as he takes the reins as the new city manager for Williams.

After nearly a year and a half without a permanent city manager, Williams City Council hired Chase Waggoner, who comes from the Midwest.

“I’m excited to be here,” Waggoner said, adding that both he and his wife are eager to explore the region, including the Grand Canyon.

He said they have already made an offer on a house in Williams and are interested in putting down roots in Williams.

“We are planning to live here and be a part of the community,” Waggoner said. “If I’m going to work here and be the city manager, this is where I want to live.”

Waggoner has worked in municipal government in various capacities, including time as a city councilmember, city manager and fire chief. Waggoner most recently left a position in health care management.

“I decided to get back into city management, which is my first love,” he said.

Waggoner is a fourth generation Missourian who grew up in the small town of Lebanon. He graduated from high school in Lebanon and went to college in Springfield, Missouri where he earned a bachelor of arts in history.

Upon graduation, Waggoner worked at a local factory and began his first foray in local government as a city councilmember.

“I had always loved my hometown and wanted to do something to improve the community,” he said. “A friend encouraged me to run for city council.”

Waggoner won his first election, beating out a three-term incumbent.

“That was my first of two terms on the Lebanon City Council,” he said. “I just absolutely loved it. I found a home in municipal government.”

Waggoner said he likes the hands-on approach of municipal government.

While on the city council, Waggoner joined the fire commission and eventually became a volunteer firefighter in Lebanon.

After two terms as a city councilmember, Waggoner was hired as a legislative assistant with the Missouri House of Representatives.

After four years as a legislative assistant, Waggoner switched gears and was hired as a fire chief for the city of Girard, Kansas.

“It was a small combination fire department with mostly volunteers, but we had four full-time people to maintain 24-hour coverage,” he said.

In 2016, Waggoner was hired to be the city manager for the town of Vandalia, Missouri. He served one year in the position.

“At that point I was ready for a break from city government,” he said.

After a while, Waggoner said he missed serving the community and began looking for jobs in municipal government again when he spotted the position in Williams.

“We weren’t interested in anything outside the Missouri area, but when this came open I was very interested,” he said. “There is the warmer weather of the Southwest, four seasons and being close to the Grand Canyon.”

Waggoner said he was pleased when he found out more about the position and the town of Williams.

“Williams seems like a really friendly town,” he said. “Everyone seems very laid back and there is a slower pace to life.”

Waggoner has been on the job as Williams city manager for two weeks, and has spent most of the time getting to know the staff.

“We really have a great group of staff,” he said. “Everyone is professional and know what they are doing. There is a ton of experience.”

Waggoner defines his management style as a “facilitator.” He said his goal is to give the department heads, supervisors and other employees the tools they need to do their jobs.

“Rather than me come in and tell them how to write a traffic citation or how to run a water system, I’m going to ask them what they need to be as successful as possible,” he said adding that he is a big proponent of training.

He said he plans to encourage city staff to stay abreast of the newest technologies and trends for their trades.

“I’m all about giving supervision, but I want to trust employees will give an honest eight hours of work for eight hours of pay,” he said. “I want people to be proud of what they have done.”