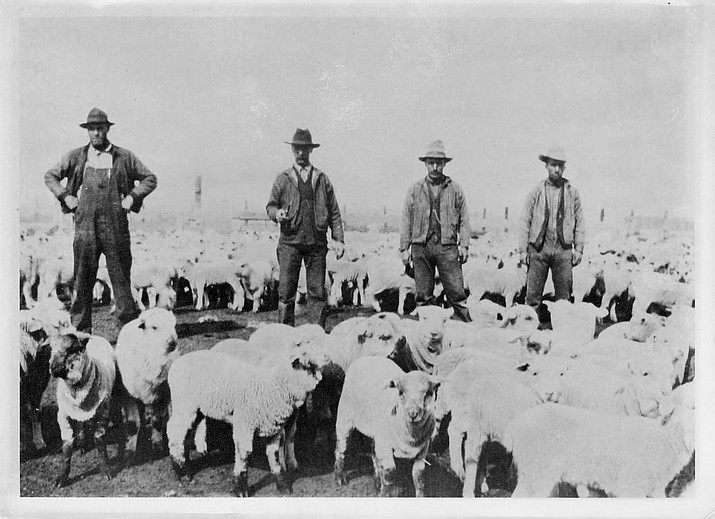 WILLIAMS, Ariz. — As the light of the day releases its final breath atop the glowing pines of Bill Williams Mountain, Juan Rojas Meza trails his bleating flock westward through the golden meadows north of Kunde Knoll.

Woven within the dust and trampling hooves, is a record of Kaibab National Forest's forgotten past begins to spin; the songs have echoed between the oaks, over the hills and across the prairies for hundreds of years. The chorus releases visions of open land, trail blazers, ambitious immigrants, flood’s of livestock, family fortunes, haunting failures and the rise of a state. It’s the fading tune of the paramount ranching history that for generations thrived over the forest.

A photograph of what would have been typical of a sheepherders' camp prior to the 1950s near Williams. From left: first and second persons unknown, Francis Hendrix Alleman, John Alleman Sr., and an unknown person. (Photo/Williams Historic Photo Archive)

For thousands of years the Native Americans of northern Arizona have known the 1.6 million acres that is now Kaibab National Forest to be fertile hunting grounds for deer, elk and pronghorn. Its vast meadows and scattered reservoirs were nourished every spring by the winter snow melt, creating ideal grazing conditions for the wild game of the area.

In 1540, a fresh set of hooves was introduced to the territory with the arrival of Coronado, who was on a quest to seek out and confiscate the fabled Seven Cities of Cibola in the name of Spain. The first sheep, along with cattle, had trailed Coronado on his treasure hunt to supply the expedition with food and other necessities. However, the tradition of sheep husbandry did not firmly take shape in the southwest until the late 1600s. The first sheep drives likely to cross into Arizona were probably made by the Navajo, who either had stolen the sheep from the Santa Fe area or obtained them from the Spanish around 1600. By the early 1800’s, woolen goods from New Mexico such as blankets, cloth and sheep were streaming along a trade route through northern Arizona to California.

“When the gold mines were established in California and the gold rush began, that opened up a whole new market for New Mexico,” said Kaibab Forest Archeologist Margaret Hangan. “After the Civil War, the government wanted to open up military routes through here; this led to the creation of the Beale Wagon Road.”

As new blood began to course through the Kaibab, the obvious potential for grazing was too hard to ignore.

“When the railroad arrived 1882, the area opened up even wider,” Hangan said. “The mills came in, Saginaw Manistee came in here and it was during this period that the area really opened up to exploitation."

When the railroad steamed into northern Arizona, a whole slew of pioneering sheep men followed. Some of the earliest individuals to graze sheep in Bill Williams country included Frank Riselda, Miller Smith, Gustave Reimer and Phillip Hull, who still has a standing cabin in Tusayan well over a century old. With this influx of sheep barons spreading across the range, a series of new issues, laws and groundbreaking land management policies came to life.

During the late 1800s, public lands did not exist on the Kaibab, (or anywhere else in Arizona for that matter) so sheep men were allowed to graze their sheep throughout the territory for over-extended amounts of time, resulting in extreme overgrazing and traumatic resource damage. This was a dire concern that had to be addressed. A group of sheep men rallied in Flagstaff, Arizona in 1886 and organized the Arizona Sheep Breeders and Wool Growers Association to help combat many of the problems that had taken shape. In the 1890s, the Department of the Interior created a movement to conserve public resources by placing portions of public lands into forest reserves as a way to protect and regulate the timber and water sources.

“The government had never done anything like that before and had no idea on how to manage it,” Hangan said.

At that time, the Department of the Interior was thinking about kicking out all sheep grazing, so the Wool Growers Association kicked into gear and sent newly elected president E.S. Grosney and Albert Potter to lobby Gifford Pinchot, the father of the Forest Service.”

After Pinchot’s three week trip through Arizona grazing country and a few scientific studies, a common ground was established between the government and the Arizona wool Growers Association. In the early 1900s, the Forest Service would lead the way in establishing grazing policies that would bring order to public lands in Arizona and across the nation.

Between 1890 and 1950, the demand for wool was at an all time high. It was during this period that legendary sheep families such as the Pouquettes, Auzas, Manterolas and Ajas began to build their bleating dynasties across the grasslands of the Kaibab. These trailblazing families, along with several other flocking outfits, would experience the glorious triumph and heartbreaking demise of the U.S. wool industry. Wars would be fought, a cataclysmic depression would strangle the nation; demand would rise and fall with the setting sun; shepherds would be enlisted from thousands of miles away and a new synthetic fiber would change the world. Not everyone would survive this onslaught of transformation, and few are tending flocks today. Yet the song of meadow will play on, as long as we are willing to listen.