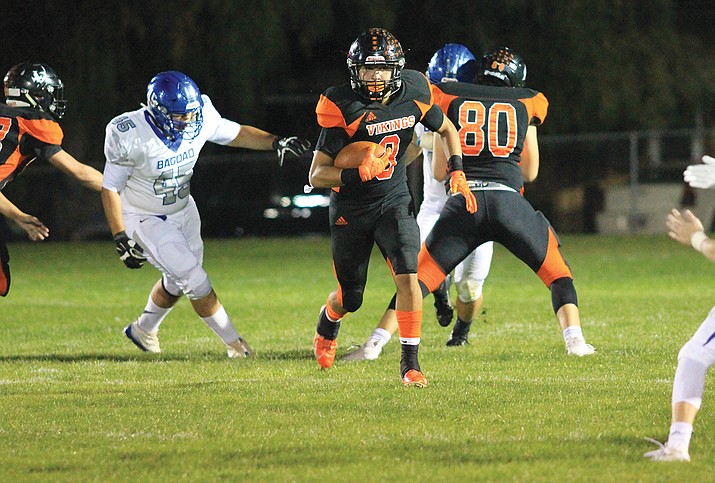 Viking David Lozano takes the ball down field during the game with the Bagdad Sultans Sept. 13. The Vikings handed the Sultans a 66-20 loss. (Wendy Howell/WGCN)

“Bagdad has a solid program so we know no matter how good we are or how good they are there is going to battle. We have some nice history with them,” head coach Jeff Brownlee said.

Beneath smoke-filled skies, the Vikings and Sultans went head to head in the first quarter with each team failing to hit the end zone.

“We had some mental mistakes we made,” Brownlee said.

The Sultans finally broke the stalemate with the first touchdown at the beginning of the second quarter.

The Vikings followed the touchdown with a safety and an Alex Garrett 7-yard touchdown and 2-point conversion to pull the Vikings ahead 10-6 with 2:40 left in the first half.

With just 35 seconds to go in the half, Viking Chance Pearson ran the ball 46 yards for a touchdown. The Vikes followed-up with a 2-point conversion and headed into half-time with a 18-6 lead.

“We felt good about things at that time and felt we could build on it in the second half,” Brownlee said.

Despite the momentum, the Vikings were surprised coming out of the half.

“Things got a little shaky there in the third,” Brownlee said.”We were trying for a squib kick but it ended up like an on-side kick and they took it to the endzone.”

The Sultans took the opening kick-off 67-yards for a touchdown and then recovered their own on-side kick to take possession again at the 50-yard line.

The Sultans scored off the possession and moved ahead 20-18.

“Once we got through the storm there, everything rolled our way,” Brownlee said.

Hoping to stop the momentum, Viking Kolby Payne ran the ball 70 yards for a touchdown, and Garrett completed the 2-point conversion to move the Vikings ahead 26-20.

The Vikings defense got in on the surge with Luis Lara-Arredondo, Cody Jensen and Dorian Ayala sacking the Sultans quarterback in near successive plays.

Pearson ran in a 30-yard touchdown, and was followed by successive scoring by Lara-Arredondo, Mario Vazquez, Drew Logan and Blake Smith to leave the Vikings with the 66-20 win.

“I think we were more physical and in better shape,” Brownlee said about the win. “I also have to credit our offensive line. Games are won and lost upfront with the offensive line. When we win games it’s because they are doing very well.Those guys are in the battle trenches every play.”

The Vikings next face Joseph City for homecoming at WHS Sept. 20 at 7 p.m.