Into the Canyon: Author, adventurer Craig Childs speaks at NAU 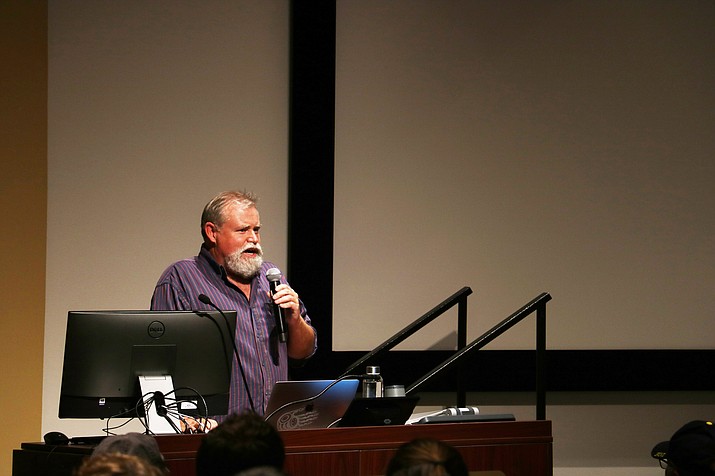 Though he has also earned his living as a gas station attendant, beer bottler and musician, Childs is most well-known for his adventure and environmental writing; he has written about following ancient migration patterns on foot throughout the Southwest and beyond, and his published works include 'Atlas of a Lost World,' 'The Animal Dialogues' and the forthcoming 'Virga and Bone: Essays from Dry Places.'

During his talk to a crowd of close to 300 at NAU, Childs spoke with a flair for the poetic, sharing memories of his days finding routes through canyons — of the “places on the earth that crack wide open” — and what he discovered about himself along the way.

Although he is an Arizona native, it took Childs years to make his first pilgrimage to the Grand Canyon; he spent his formative years along the Mogollon Rim and in Utah’s Canyonlands, learning to read the unwritten maps of the landscape

“I don’t really remember names,” Childs said. “It’s more texture. There are only so many things a map can tell you.”

Childs spoke of the signs and signals that he learned to read — the bighorn sheep droppings, the cave art and the pot sherds — which betray the secret that people have been between these walls before, that there is a passage through. He shared stories of the mentors who came before him, who taught him to approach route-finding in the Grand Canyon as if it were a math equation or a chess match.

And while his approach is more intense than the casual visitor’s, Childs emphasizes that there is more than one way to experience the Grand Canyon.

“You can experience it from the campground, from the visitor’s center,” he said, before recalling a morning that he scrambled down to a hiding spot along the rim to simply sit and listen to the impression that the Canyon left on the visitors who walked along its edge.

Shrouded in the memories of a life spent in the shadows of its walls, Childs cannot help but worry about the canyon in the face of shrinking federal protections.

“We’re changing it,” he said. “We change everything we touch.”

Childs worries about the dams and the uranium mines, reaching dirty hands into the clean water that has spent millennia carving out the landscape.

Water is a resource that Childs treasures in the canyon, his objective and his touchstone; he says that most of his movements up and down the steep passes have been in relation to water — finding the next valuable source, but also remembering the pools and springs that he had left behind.

"Where is the water that you came from?" Childs asks the audience, and for a moment, he is no longer talking about the canyon, but instead about the water that we all came from, the primordial soup that hugged the formless bodies of our genetic ancestors, the collective memory from which we all emerged. And then he is back inside the canyon once again, speaking of the red walls that rise around you like cathedrals, smooth as soap, and moving through the places where the floods have scoured, written into the earth.