Guest column: Who were the Harvey Girls? 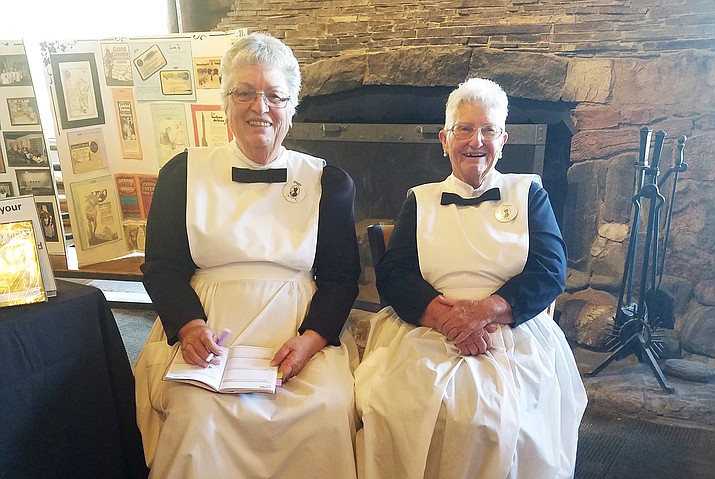 Janice Stewart and Peggy Nelson, two of the original Harvey Girls, share what it was like to work for the Fred Harvey empire that shaped the early Grand canyon community. (Photo/Heather Brigham)

Because his business was focused on cleanliness, service, reasonable prices and good food; it was an immediate success. By the late 1880s there were Harvey establishments every one hundred miles along the Santa Fe line. Back then, the practice was to have men as waiters, however, Fred Harvey found that the men he hired to work in his restaurants were as wild as the west.

Fred Harvey had very high standards when it came to his restaurants and often would pull surprise inspections. On one such trip, he stopped at his Harvey House in Raton, New Mexico. The waiters were in bad shape and the dining room was in a condition that was way below his standards. As the story goes; the previous night there had been a big brawl in his establishment and the waiters, besides being beaten up, were hung over. Mr. Harvey fired the entire staff including the manager on the spot. Mr. Harvey turned to Tom Gable who was a friend with him on this particular trip and said, “You’re the new manager, what are you going to do?” Tom thought for a while and said “Let’s hire women.” At that period in time, it was a very unconventional thing to do, but Mr. Harvey agreed to try it out. At first local women were hired and when Mr. Harvey saw how well the girls were working out he decided to expand on the idea. He placed an ad in several of the east coast newspapers looking to hire young women between ages 18 to 30, of “good moral character, attractive and intelligent. Starting wages $17.50 per month with room and board included.” It was then that the Harvey Girls were created.

Janice Stewart, a spunky octogenarian, is one of over 100,000 original Harvey Girls hired. She worked right here at the Grand Canyon Bright Angel Lodge back in 1956, 1957, and 1958. Today, Mrs. Stewart works as a volunteer in Winslow, Arizona as a Harvey Girl educating the public about how life was lived and experienced back then. By preserving the history of the legendary Fred Harvey, the famous Harvey Girls, and the legacy of the Santa Fe Railroad; Mrs. Stewart keeps the “Harvey Girls” memory alive.

On Aug. 21, at promptly 9 a.m., Janice Stewart and Peggy Nelson (President and head waitress of the Winslow Harvey Girls) came to the Grand Canyon where they set up their history collection in Bright Angel History Room showing and telling stories from the Harvey Girl days. Together, they gave historic presentations at 11 a.m., 1 p.m. and again at 3 p.m. each lasting for thirty minutes. The more they spoke, the bigger the crowd grew. Thank you Mrs. Stewart and Mrs. Nelson for sharing your stories with us here at the Grand Canyon, South Rim.

Not only was Fred Harvey known for introducing Harvey Girls as waitresses but he was also known for his coffee. And of course there was no one better to serve his coffee than his Harvey Girls. According to railroad historian Lenore Dils, “Whether you had a cup of Harvey Coffee in Kansas City, Missouri or Albuquerque, New Mexico, it tasted exactly the same as the last cup you had many miles away. The reason for this was that Mr. Harvey had the water analyzed at each of his Harvey Houses, and after much experimentation, he worked out an exact formula for each location. Where the water was soft or hard, one still got a superb cup of coffee.” Today, you can now sample the absolute, authentic Fred Harvey’s Original Signature Coffee in the Bright Angel History Room right here at the Grand Canyon, South Rim. Through extensive research and taste testing, we have secured the same coffee blend (beans from the highlands of Colombia and mountains of Mexico) to bring you the taste and quality that was a signature of the Fred Harvey empire.

Janice Stewart and Peggy Nelson of the Harvey Girls will be returning to the Grand Canyon, South Rim Oct. 17 for another show and tell including historic presentations where they will demonstrate how the Harvey Girls would place your cup if one requested a cup of Fred Harvey’s Coffee. Dates and time to be announced.