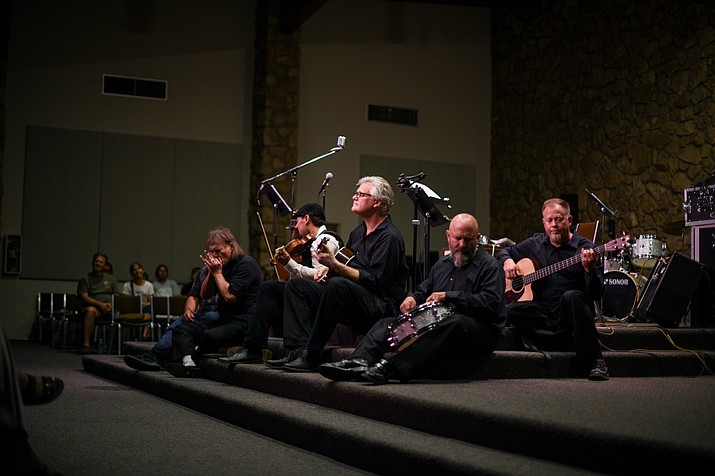 It all started when Clare Hoffman and Robert Bonfliglio went on a Rim to Rim honeymoon-hike with their instruments. Hoffman plays the flute and Bonfliglio, the harmonica.

They played throughout their hike and early on, rangers started to know about their travels. They played little impromptu concerts along the way and promptly after hiking out, hardly showered, NPS requested a meeting with them. They wanted to bring music to Grand Canyon, and so the Grand Canyon Music Festival formed.

On Aug. 30, the Bonfligio group opened at the Shrine of the Ages in Grand Canyon Villiage. Co-founder Robert Bonfiglio started in right away joking about the festivals roots and made some very humorous comments about his age and involvement with the festival.

“So I started the festival when I was about 5, I'm only 40 now…(waiting a beat) times two," Bonfligio said,

The crowd roared at his remarks.

Joe Deninzon and Stephen Benson have been invested in the Music Festival from the early days. Deninzon plays the jazz violin and Benson, the guitar.

The group works all week-long teaching the Grand Canyon School's music students how to play their instruments and the week's work is evident in the amazing performance that the students put on at the end of the week.

This year, Grand Canyon school has a new music teacher. Steve, Robert and Joe invited Boaz Curry El up to the stage several times to accompany the group, as well as share his saxophone talents with some special solo opportunities. Boaz wasn't the only Grand Canyon performer to take the stage with the Bonfligio Group. Both Bryan Stone and John Vail accompanied the group for much of the performance, as they have in the past.

The music was a vast variety and as I looking around the room many emotions were displayed in the almost-full audience. Some people tapped their feet, swayed side to side, hooted and whistled for some of the great soloists and held their heads in there hands, soaking in the sounds. The audience was alive with this music and Grand Canyon is lucky to have this event take place here.