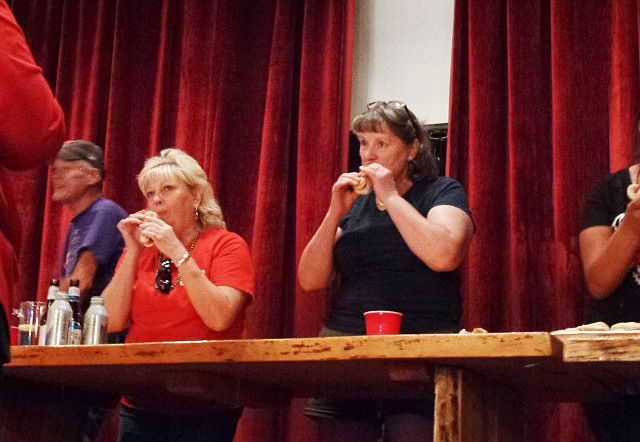 Participants compete in the hotdog eating contest at the 2nd annual Labor Day celebration. (B. Garibay/WGCN)

Sultana manager Jason Olson loads up his plate as the Women’s Auxiliary group dish-out spoonfuls of chili during the Chili Cook-off Sept. 2. (B. Garibay/WGCN)

The event was hosted by American Legion Cordova Post 13 and the World Famous Sultana.

While Elvis rattled his pipes and the events bounced from one to the other, people lined up single file to set their taste buds ablaze, sampling over 15 pots of chili. Members of the American Legion’s Women’s Auxiliary cleared their sinuses while dishing out steaming cups of flavor while Legion members Charlie Bassett and Jason Olson kept the festivities rolling from behind the curtain. The Labor Day celebration offered flavor and fun to people of all ages while raising money to benefit the Northern Arizona Veterans Memorial Cemetery located at Camp Navajo.

“All the proceeds from this event and any donations received will go towards the Memorial Cemetery,” Basset said. “The American Legion is not keeping any of it, it’s all going to their organization.”

Roger Ely, state commander of The Order of the Purple Hearts of Arizona, said the funds received from the Labor Day celebration will go toward purchasing park benches for the cemetery as well as aiding in the construction of a carrollon, (bell tower) that many U.S. military cemeteries around the world possess.

“We’re trying to build the carrollon and a shelter for us to hold all the services in,” Ely said. “Because of where we’re located and the fact that all the services are held outside, we need a shelter. Any veterans who qualify from Williams and the surrounding area are able to be buried at the cemetery for no charge, and it’s a very beautiful cemetery.”

According to Bassett, the cook-off could become an annual tradition.

“We’re probably going to hold this event for a third year,” Bassett said. “Theresa Stevens, Jason Olson and the Sultana staff have been outstanding with the amount of support they’ve provided to the American Legion; shoot, today’s celebration was only made possible through the help of Theresa, Jason, the Women’s Auxiliary, Son’s of the American Legion, the Legionaries and Sultana Staff.They deserve all the credit for the day’s success.”