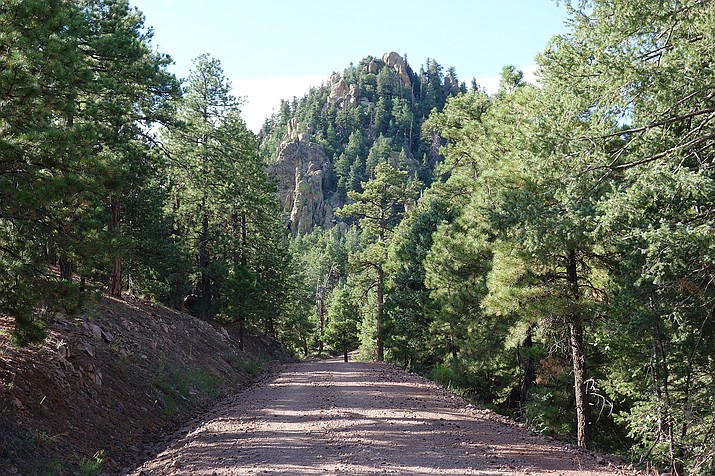 In 2018, Kaibab National Forest led a field tour for partners in the restoration effort of Bill Williams Mountain on the Williams Ranger District. (Photo/USFS, KNF)

WILLIAMS, Ariz. —The Coconino County Board of Supervisors reiterated their commitment to the prevention of post-wildfire flooding in Williams when they approved $800,000 to be used for forest restoration of Bill Williams Mountain at their Sept. 3 meeting.

The money will be used for a steep slope thinning project conducted by the National Forest Foundation on 300 acres on the southern slope of the mountain.

“With our partnership with the National Forest Foundation and Kaibab National Forest, we are working together to try and get some wood cut up on the mountain in critical areas,” said Coconino County Supervisor Matt Ryan.

In 2017, the Coconino County Flood Control District determined that catastrophic wildfire and post-wildfire flooding was the number one public safety risk for the county, and the restoration of Bill Williams Mountain was a top priority.

“The next phase was to step into our budgeting this year and figure out where we would put the money,” Ryan said.

“We’re going to probably top out at about $1.8 million doing that emergency mitigation,” Andreani said. “What the board is trying to do here is turn the corner and focus on forest restoration rather than to continue going through these fire experiences and having to rush out and do these mitigation efforts.”

The specific project agreement with the National Forest Foundation is to improve forest health in Upper Hell Canyon, which begins near the summit of Bill Williams Mountain and drains into the Verde Watershed. The U.S. Forest Service has determined the watershed is impaired because of degraded soils, overstocked trees and slopes with excessive fuel loads. The watershed has been identified as at risk for a high-severity wildfire that could impact the city of Williams and the Verde River.

The overgrown forest conditions are also contributing to an increase of forest diseases such as dwarf mistletoe and impacting the habitat of Northern Goshawks and Mexican Spotted Owls.

Kaibab National Forest began working on the Bill Williams Mountain Restoration Project in December 2015. The project aims to thin approximately 15,200 acres of dense vegetation on Bill Williams Mountain with traditional commercial timber harvesting and stewardship contracts; however, the project is unique because it requires intricate hand felling, ground base logging and helicopter logging because of the steep, varied terrain.

In 2018, the county developed the Bill Williams Mountain Forest Restoration Proposal, which created a partnership between the Coconino County Flood Control District and National Forest Foundation to work with Kaibab National Forest to improve the legal, financial and technical processes to accelerate forest restoration.

The National Forest Foundation, in conjunction with Kaibab National Forest, has issued a Request for Proposal for treating the 300 acres on the south side of the mountain. These acres were identified as critical to restoring the watershed above the city of Williams.

According to County Forest Restoration Director Jay Smith, the 300 acres is within a USFS stewardship sale.

“We’re basically providing a service because the timber doesn’t have enough value to cover the costs,” he said. “The money we are spending is being spent on a service. The value is in the restored acres.”

Smith said the NFF has 1,000 acres to thin on steep slopes outside Mexican Spotted Owl habitat. He said the plan is to complete 300 acres this year, and then tackle another 300 next year.

“This is a four to five year project to get these steep slope acres completed,” he said.

The NFF received three proposals and intends to begin the project in the fall 2019 and have it completed by December 2020.

The work involves forest thinning on steep and rocky terrain that may require specialized equipment in order to cut and remove trees and downed woody debris.

The NFF will implement the project which includes managing the contract, reducing the fuel loads, ensuring the work is done to forest service specifications, and monitoring the risk of high-severity fire before and after treatment.

“If 2,000 acres burned on Bill Williams Mountain, we would be in a world of hurt,” Andreani said. “We’re really excited about moving forward with this initial project for Bill Williams.”