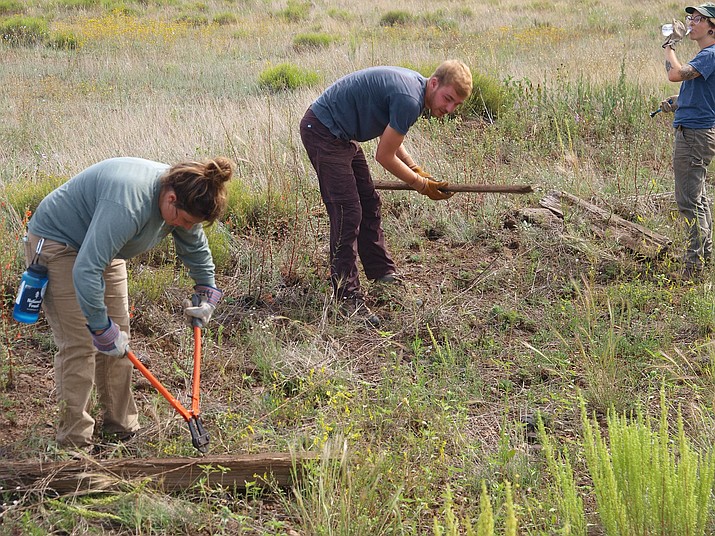 The area known as Garland Prairie, south of I-40 and between Williams and Flagstaff, is the site for several future fence removal and modification work projects.

Garland Prairie is roughly 14,000 acres — the pronghorn spend summer and fall there and at other high elevation meadows before migrating up to 60 miles south along I-40 and down SR 89 to Prescott or Jerome. Some animals stay around Wagon Tire or Drake.

Currently, AAF is coordinating with Arizona Game and Fish Department (AZGFD) and Kaibab and Coconino National Forest personnel to develop projects to remove or modify existing fences to facilitate the pronghorn migration routes from winter to summer ranges.

Using data collected from radio collared pronghorn, existing routes are identified and plotted. This data is used to identify obstructions in the animals’ routes. Other species in the area — elk and mule deer — also benefit from this activity. Pronghorn prefer going under fences and only in extreme cases do they attempt to jump fences. AAF modifies fencing by removing the bottom strand of barbwire and replacing it with smooth wire 18 inches above the ground, or in the case of this first project, complete removal.

Early arrivals at the basecamp Aug. 9, were treated to a dinner of pulled pork, baked beans and coleslaw, thanks to camp cooks Bill and Mary Keebler.

The following morning, after 14 large pots of coffee and a continental breakfast, around 80 volunteers gathered for an orientation talk by Jeff Gagnon. Gagnon outlined a brief history of why, how and what would be accomplished that day. Volunteers were then broken into four groups. Each crew had a wire roller mounted on ATVs, post pullers and hand tools. Crews then headed out to their work areas, several close to camp and another two mile stretch of fence about 12 miles distant. By early afternoon, crews had removed over three and a half miles of fence, some of it more than 100 years old. Also removed was around 120 yards of old sheep fence. Fence posts, both wooden and steel T-posts, had been gathered and stockpiled along with countless spools of old wire destined for the recycler.

The remainder of the afternoon was spent “lopping” or cutting down young Ponderosa pines, cedars and other brush that were encroaching on a corridor that had been cleared five years earlier. Keeping this area open is important as a migration route for the pronghorn. Around 130 acres were cleared Aug. 10.