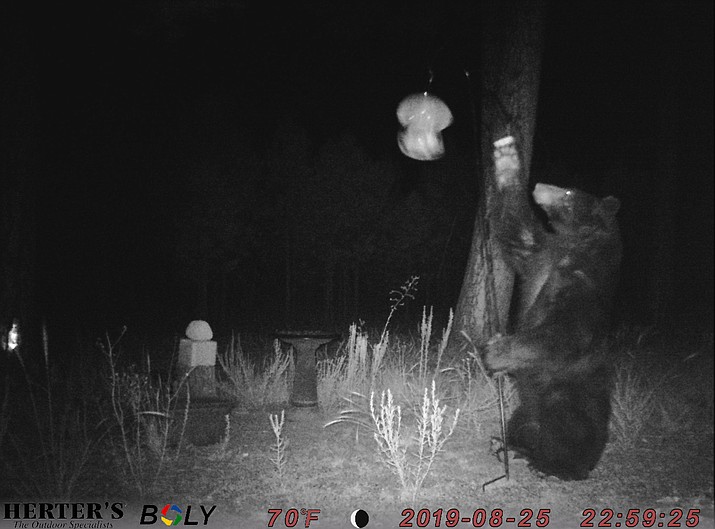 A resident was able to capture a photo of a bear messing with a bird feeder at a home in Parks Aug. 25. (John Sears/photo)

WILLIAMS, Ariz. — A bold black bear has a new home after creating a nuisance at Lost Canyon’s Young Life camp south of Williams.

According to the Arizona Game and Fish Department, two bears were found foraging for food in the dumpsters at the camp at the end of July. One bear began making repeat visits, which concerned camp managers. Residents also reported bear activity in a nearby neighborhood.

AZGFD Wildlife Officer Will Lemon said because of the bear’s behavior, and the proximity to children at the camp, the bear was trapped and later released in the White Mountains.

Lemon said there has been no other reported activity in that location, but a Williams resident reported a sighting in town Aug. 19. Officers were unable to verify the sighting.

Game and Fish officers are also actively trying to trap a nuisance bear in Parks after multiple reports were received of the bear rummaging in trash cans, bird feeders and a beehive.

“It is not unusual, but often bear activity will pick up right before monsoons as bear habitat is usually dry,” Lemon said. “As there has not been much of a monsoon season, the bears have still been active looking for food and water.”

“If it is a good monsoon season, bears will typically stay away from residences as they can find everything they need to survive in the forest,” he said.

Lemon said residents can help keep bears wild by keeping garbage and other attractants inside their homes at night.

“They should empty their bird feeders and any other attractants, such as beehives and watering troughs,” he said. “Also, if they have livestock, the livestock feed could attract the bears as well.”

Lemon advises people to keep their distance from any bears, and if approached, back away slowly yelling at the bear.

“We will try and gather as much information about the bear sighting as possible and take the next steps in trying to make sure there are no more issues with the bear,” Lemon said.

More information about living in bear country can be found at www.azgfd.com/wildlife/livingwith/bears/.