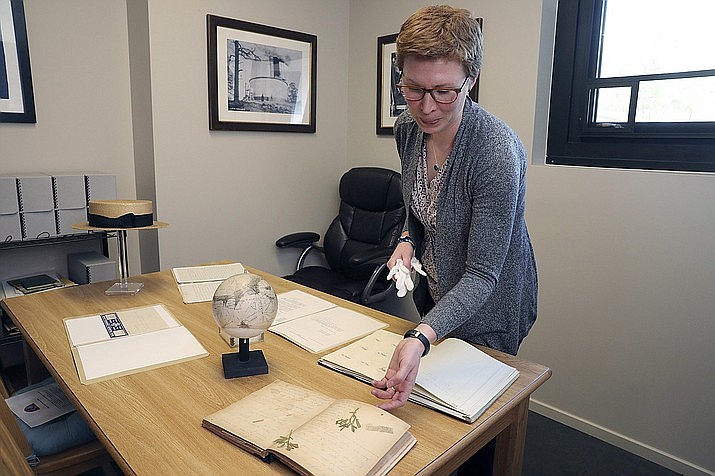 In this Tuesday, Aug. 20, 2019 photo, Lauren Amundson, archivist and librarian, shares the history of some of the oldest artifacts stored at Lowell Observatory in Flagstaff, Ariz. Historians, archivists and librarians in northern Arizona are teaming up to protect artifacts in the event of an internal or external disaster. (Jake Bacon/Arizona Daily Sun via AP)

FLAGSTAFF — Historians, archivists and librarians in northern Arizona are teaming up to protect artifacts in the event a disaster.

The group has met quarterly for the past year to formalize the disaster support partnerships that have existed between them for years, the Arizona Daily Sun reported.

"We recognize here at Cline Library that we, as well as all our cultural heritage partners in the region, are isolated geographically from assistance should a disaster occur. We would need to rely on each other," said Jill Friedmann, associate dean of Cline Library, who is coordinating the effort.

The library already works closely with the Arizona Historical Society, which brought some of its material to the library for temporary storage during the big August wildfire near Flagstaff.

"Our main threat is and has always been wildfires," said Bill Peterson, vice president of collections and education for the society. "In the event of a wildfire, we have a contingency plan. We've just never had a formal agreement (with these organizations) on how that would look or what they would be."

The concept began with Peter Runge, head of Cline Library's 30,000-square-foot (2,800-square meter) Special Collections and Archives, which stores artifacts from Northern Arizona University, Flagstaff and the rest of the Colorado Plateau region.

Runge previously worked at the University of California, which partnered with California State University to have all their campuses share resources in the event of a disaster.

If the northern Arizona partnership proves successful, the goal is to incorporate cultural content holders from throughout the region, including organizations on the Navajo and Hopi nations. A few have already joined.

A formal agreement would help with record keeping when such materials and services are temporarily loaned to different organizations.

Each organization has a prioritized list of items to save from destruction as part of individual disaster plans. An agreement among these organizations could better ensure the safety of some of the region's most irreplaceable material.

Cline Library's special collections area holds more than 2 million items, including handwritten ledgers from the Babbitt Brother Trading Company, invoices from the Arizona Lumber and Timber Company and other materials dating back to the 1850s, many of them yellowed and boasting the heavy aroma of aged paper.

In a disaster, Runge said he would save the delicate sketches of Mary Colter, the architect who designed the Grand Canyon's Bright Angel Lodge and other historic structures.

Irreplaceable items at the Pioneer Museum include the Kolb Brothers' movie cameras and the body of Josephine the mountain lion, the mascot of the Arizona Rough Riders.

Lowell Observatory has 50,000 photographic plates of sky photos alone, paper documents from its past astronomers and employees and letters from Albert Einstein.

"Each of us can do our own little thing, but together we can share resources," observatory archivist and librarian Lauren Amundson said. "It gives a sense of security knowing that you're not doing this alone."