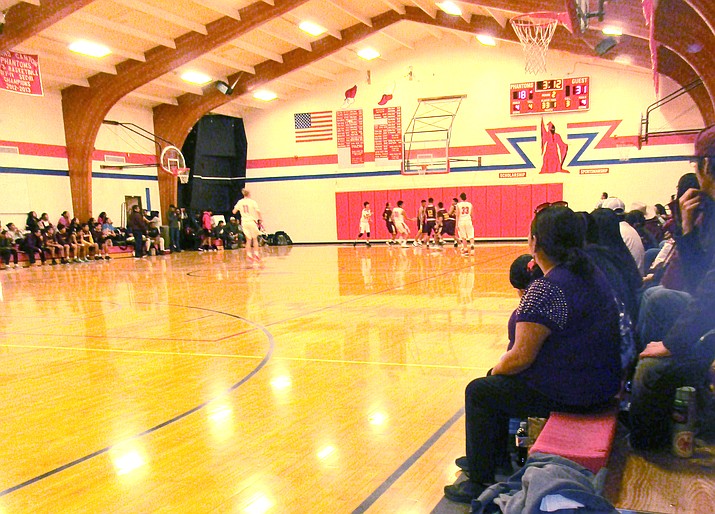 GRAND CANYON, Ariz. — All of her life, Leona Begishi has been pulled in three directions. When her dreams of becoming a law enforcement officer were cut short by an injury, her love for volleyball and school volunteerism led to a thriving career in the classroom.

“When we look at our (AzMerit) test scores, we notice that the scores of the Native students are a little lower,” Begishi said. “I think there are some cultural and some language barriers because these kids live in two worlds, and sometimes they can conflict with each other.”

While Begishi said it’s very difficult to determine why some, not all, Native students don’t test as well as their non-Native counterparts, she said she has noticed after working in several schools on and near reservations that Native students tend to be very visual, hands-on learners.

“If you think back, what did we do? We were all hands-on,” she said.

Begishi said language can sometimes throw a curve as well, since the Navajo language, when translated, ends up being in the reverse order of English. So instead of a white horse, Begishi explained, it’s a horse white. That difference can be confusing, especially for students who speak their native language at home.

But Begishi has found a lot of success with her students by simply relating back to the world of the reservation that’s familiar and comfortable to them. Instead of trying to explain abstract concepts like mathematics in their own terms, Begishi said she often has her students close their eyes for a few moments and be transported back to their grandmother’s home on the reservation.

She approaches writing the same way because she finds that the younger Native American students write very simple sentences. So using grandmother’s home on the reservation, she immerses them in their culture while getting them to focus on descriptive details.

“I tell them to close their eyes and start walking towards their grandmother’s sheep corral,” she said. “I ask them, ‘What do you see? What do you smell?’

After the exercise, the students are able to enhance their writing with descriptive details they can imagine. By relating to their culture, Begishi makes learning less daunting and easier to grasp.

Watching them grow, from confusion to their lightbulb moments, is a labor of love that keeps Begishi charging forward.

Although she had always been drawn to schools and volunteering or aiding students, Begishi said the really strong urge to help these students began with her own daughter, Chelsea. When her daughter began school, Begishi made sure she was prepared, but noticed quickly that that she wasn’t catching on as quickly as she could have. Her teachers were certain that the information would just one day click, but Begishi knew something wasn’t quite right. When her daughter was in fourth grade, she went to see her teacher, who had also noticed something amiss.

“He took me out in the hall to a big board where all the students had written sentences and pointed to Chelsea’s and asked me ‘What do you think it says?’” Begishi said.

After struggling to read words that didn’t make much sense, she said the teacher held up a mirror to the sentence, which plainly read “God is good.”

“She had written the entire sentence and all the letters backwards, and she had done it as quickly as if she was writing her name,” Begishi said.

It turns out Chelsea was perfectly capable, but she was severely dyslexic.

“At that point I just knew that I had to help students,” Begishi said.

It’s not only academics that Begishi strives to teacher her students. As she works with some students, she notices what she calls a lack of pride in their heritage and sometimes a lack of respect for non-Native teachers.

“In our culture, we have respect for our elders, but I had one student referring to a teacher say ‘That’s not MY elder,” Begishi explained. “And I had to say, you know, they don’t look like your elders but they are older than you and they are trying to teach you what they went to school to learn.”

Begishi gets emotional when she thinks about another cultural barrier – a lack of pride in their Navajo heritage. In her own family, Begishi said there were many alcoholics and realizes that it’s something that other students struggle with as well. But then she thinks of her ancestors, who survived the Long Walk, and suddenly it’s easy to feel pride in her people overcoming horrific adversity to survive and carry on their way of life.

“I tell them ‘You are descendants of your strongest ancestors,’” she said. “You’re here because they were strong and survived and that is a gift.”

Her love of her students and pride in her heritage are only two of the strengths she brings to Grand Canyon School. The third is her love of volleyball. Begishi grew up near Cameron on the Navajo Nation, said her love of sports began early, before she ever saw the inside of a classroom.

“My uncle was in the service, and he was stationed in Germany,” she said. “While he was over there, he learned to play golf, and when he came home, we took veggie cans, whatever we had, and buried them in the ground to make a golf course in the dirt. My siblings and I would follow my uncle and my dad around as they played.”

Her real love, though, became volleyball. It was a sport both she and her sister gravitated toward, and a sport they continued to play as a family well into adulthood. And although she wasn’t ready to take on the role of head volleyball coach because of family commitments – she’s delighted to say her granddaughter is her whole world – she’s thrilled to be the assistant coach this year. Begishi is working with junior varsity team, helping underclassmen, even those who have never played before, develop their skills on the court. And when she runs into a wall with training, she often reaches out to her sister, who coached volleyball for many years at the Tuba City boarding school.

“She started the volleyball camps up there for the younger kids and she always has ideas for me to try,” she said.

While she has great success helping her Native students achieve school standards and improve their academic performances, Begishi isn’t resting on her laurels. She has ideas to improve the cultural education of not just her students but the entire school. In the future, she hopes to organize cultural education activities that she experienced on reservation schools, in which students celebrated their culture with daily activities.