Gone but not forgotten: Out of Africa giraffe dies 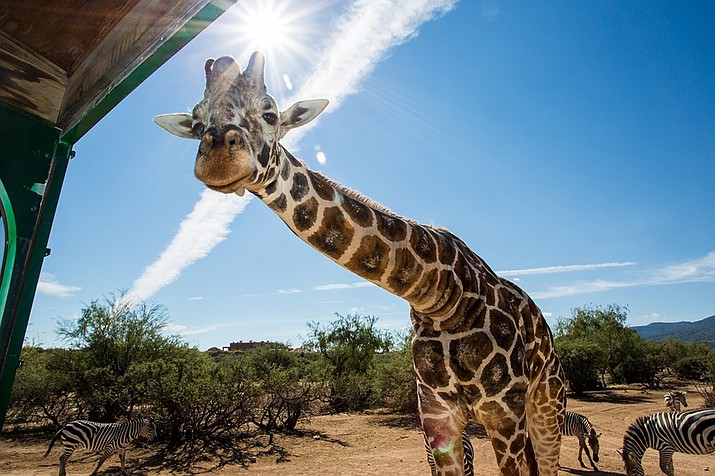 CAMP VERDE, Ariz. — It won’t be easy for Out of Africa Wildlife Park to replace one of its most popular animals, a 20-year-old kissing giraffe named Kibo that passed away Aug. 20.

Fortunately, Out of Africa is still home to one other giraffe, 18-year-old Pilgrim, that arrived at the park with Kibo almost two decades ago.

It may be a while before Out of Africa can replace Kibo with another male giraffe, explained Ashton Powell, public relations director for the animal park.

First, Out of Africa has to fundraise to pay for Kibo’s latest veterinarian bills. Then, the park staff will search for another male giraffe, which will come at a significant cost.

What can’t be replaced is all the affection that park guests are showing Kibo by the huge response on social media, explained Powell.

Fans are posting pictures and comments online about how much they liked the giraffe known for eating celery right out of the park guest’s mouths and with a big kiss.

“It’s slimy,” Powell said. “People love it. It’s an experience. So many people pulling out pictures, sharing their experiences. People are saying that their son sleeps with their stuffed animal Kibo every night.”

Park guests riding on the safari bus can either hand the giraffe celery or put it in their mouths directly to get a “giraffe kiss.”

It became so popular, the park began an annual fundraising event and started selling “I kissed a giraffe” T-shirts to raise money for wild giraffe conservation in Africa.

During the past 20 years, thousands of people have gone through the tour and have been kissed by Kibo, Powell explained.

“Kibo’s personality was very inquisitive, very curious about everything. Kind of sassy at times.”

Kibo really ruled the roost out there among the other animals. “He was the peacemaker,” Powell said.

Kibo and Pilgrim had to be kept apart for the past few years because they were fighting, a trait common among mature male giraffes.

Powell said Kibo, at 20 years old, surpassed the age of death of 14 for an average male captive giraffe.

He passed away while being surrounded by the park owners and loving keepers. The park said he died from complications experienced during a procedure by veterinarians to work on his feet.

Out of Africa Park released the following statement about Kibo:

“All of the thousands of people who have visited our park since 1999 knew him, loved him and probably had been kissed by him.

“He touched our hearts and reminded us to be silly and to laugh every day, especially when he would sit down in front of the entry gates.

“He had a level of wit and curiosity that surpassed any other friends with which he shared his space. He always drew you in for the kiss and made you feel like a giant kid again.

“Saying farewell to this kind of friend does not happen quickly and in fact, has left many breathless and deeply saddened.”