Boo and brrr: A chilly Halloween in store for Arizona this year 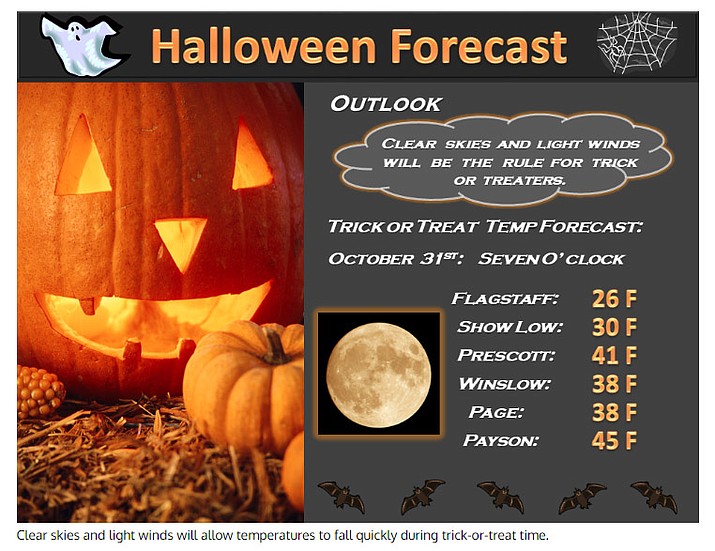 PHOENIX – Trick-or-treaters will need to bundle up this year because temperatures will be lower than normal across the entire state.

Northern Arizona will be near or below freezing, with breezes making it feel 5 to 10 degrees cooler. In Tucson and metro Phoenix, temperatures will fall into the 60s by 7 p.m.

In northern Arizona, after a very cold start to the morning, temperatures are expected to rebound this afternoon, according to the National Weather Service. Trick-or-treaters can expect daytime temperatures around 55 degrees in Williams and 49 degrees at the Grand Canyon.

Breezes will continue across northern Arizona, producing a dangerous wind chill until the weekend.

High pressure over the eastern Pacific Ocean has shifted west due to the passing of a disturbance over Utah. A cold front tailed the disturbance as it moved over central Arizona early Monday, pushing temperatures only into the mid-70s in parts of the state. This trend will continue for the rest of the week as a second cold front drops south from another disturbance Tuesday night.

Across southern Arizona, temperatures will be similar to Phoenix, with highs in the mid-70s and lows in the 40s until Friday. Plan to layer up for the morning chill, but comfortable afternoons are expected.

Halloween should see the coldest morning so far this season in the Valley, with temperatures in the low to mid-40s.

Forecast models are in agreement of a state-wide warm up by the weekend as the second disturbance pushes east. High temperatures will return to the low 80s, near normals, in Phoenix on Saturday. No rain or snow is in the forecast at this time.