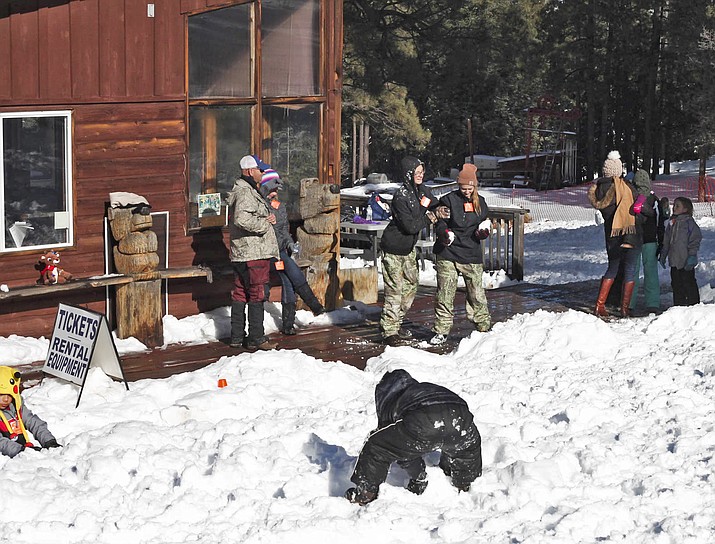 The Kaibab National Forest is accepting comments through Nov. 7 on the environmental assessment for the resort.

The forest proposes issuing the Elk Ridge Ski Area a special use permit to the new owners, Elk Ridge Recreation I, LLC, under the existing terms and conditions for the current permit.

“The operation would be limited to the use, repair or replacement, and maintenance of the existing infrastructure,” said Forest Supervisor Heather Provencio in a letter announcing the comment period.

There would be no new construction or expansion authorized under the proposed action.

Elk Ridge Recreation I, LLC is a division of Mountain Capital Partners who purchased the business from Tammy Fountain in October 2017. Fountain had operated the facility for the previous 12 years. With the lack of consistent snow, the resort had mostly been open for sledders and those seeking other snow play opportunities.

According to Arizona Snowbowl general manager J.R. Murray, Elk Ridge will be managed by Arizona Snowbowl, which is also owned by Mountain Capital Partners. In 2017, Murray said the plan for Elk Ridge was to replace the lifts and modernize the facility with intentions of reopening the ski slopes in the winter of 2018.

However, Murray said discussions were ongoing with Kaibab National Forest and the ski area did not open during the 2018-2019 season.

On Oct. 8, 2019, Kaibab National Forest announced they were accepting comments on the Draft Environmental Assessment for Elk Ridge Ski Area through a public notice in the Arizona Daily Sun.

Kaibab National Forest proposes issuing a 40-year Winter Resort Term Permit to Elk Ridge Ski Area within the constraints of the original permit without any new or additional activities.

The city of Williams has agreed to supply 30,000 gallons of water per week during peak operations for the ski area.

Other actions include replacing the surface (rope) tow lift with a magic carpet which would involve removing the lift infrastructure, towers, engine, operating shed and overgrown vegetation; placing an artificial snow material on the existing ski run; operating a snow cat to transport skiers and snowboards temporarily near the old poma lift; removing various antiquated equipment such as snowmobiles and snowcats; and excavating any soil contaminated with fuel, oil or other fluids.

The permit will not allow the replacement of the poma lift, or grading or reshaping the ski area runs.

Visitor capacity would remain same with a maximum of 250 skiers and 60 snow play guests at a time as specified in the existing permit.

Mexican spotted owls have been observed in the ski area footprint although the USFS determined the owl’s habitat would not be affected by the authorized activities. The USFS did determine the action could potentially disturb a pair of Mexican owls observed nearby.

Bill Williams Mountain was identified in the early 1980s as traditional cultural property fox six Native American tribes who were notified of the Elk Ridge Ski Area permit project. Kaibab National Forest recognizes the ski area is considered an ongoing adverse effect by the tribes, but said the issuance of a permit under the same conditions as the previous permit does not represent an additional adverse effect.

The EA, along with other information about the project, is available for review online at https://www.fs.usda.gov/project/?project=56909 and the Kaibab National Forest Supervisor's Office.

Comments concerning this project must be in writing and may be delivered electronically or by mail, facsimile, or hand.

Comments must be marked "Attention: Elk Ridge Ski Area Permit Issuance Project." Written comments may be submitted via any of the following methods:

• Mail or hand deliver to:

Business hours for the office listed above is weekdays 8 a.m. - 4 p.m., excluding holidays.

For a paper copy of the environmental assessment, contact Sue Farley, (928) 635-8331 or e-mail susan.farley@usda.gov.