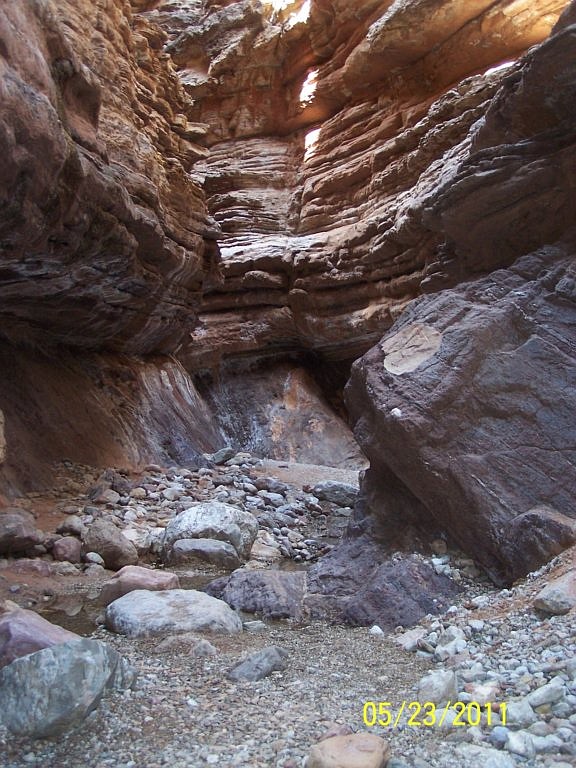 Blacktail Canyon sits ominously at Colorado River Mile 120 - welcoming in the day, anything but after dark. (Photo/USGS)

Perhaps it's fitting that within lies the Great Unconformity, a slap in the face to all we know of Earth's history, an unsubtle reminder that mystery awaits.

To geologists, the strangeness of the Great Unconformity suggests a gap in the geological record - between the upright slant of the ancient Vishnu schist and the Tapeats sandstone stacked neatly on top of it, millions of years of erosion seem to be missing.

To river runners and visitors who have experienced everything from forboding dreams to nausea and unexplained dread, the time gap in Blacktail Canyon is less literal and more frightening.

The nature of Blacktail Canyon has long been known to river runners. Located at Mile 120 on the Colorado River, it has been a popular stopover spot for adventurers heading upriver.

One story recounted in American folklore tells of two river guides who decided to sleep in Blacktail Canyon for the night before being urged to leave hastily by a shared dream.

The guides were leading a rafting trip of visiting college students when they stopped near Blacktail Canyon to camp for the night. The students pitched tents on the beach, but the guides had decided they didn't need a tent. When it began to rain, the guided found shelter under a rock shelf near the mouth of Blacktail Canyon.

It was destined to be a sleepless night, however.

One of the guides heard what he thought to be a distant drumbeat, but dismissed the sound as a trick of the canyon's acoustics and tried to sleep.

In a dream he later described, the guide said he heard loud drumming drawing ever closer. He said an elderly Native American, wearing an ornament around his neck, appeared in his dream holding a stone knife in one hand and gesturing to him with the other. The guide said he felt the unnamed man had an urgent message for him: Leave.

Overcome with the feeling that he and his friend shouldn't be there, the guide woke suddenly to find the Canyon filled with the sound of frenzied drumming and his friend was already wide awake — he'd had the same dream of the Native American man telling him to leave immediately.

The two guides did as they were told, running through the rain to the beach to join the rest of the company. As soon as they left the canyon, the first guide reported that the drumming stopped; the Canyon was as silent as if they'd never been there.

Christa Sadler, a former river guide, also reported hearing Native American drumming within Blacktail Canyon as she and her friend tried to camp. In There's This River, a book of boatmen's tales, Sadler said both she and her friend were plagued by dreams full of loud drumming and shadowy, wraith-like figures demanding they leave the canyon immediately. The dreams had such an impact that Sadler and her friend packed up and left the canyon in the middle of the night.

It's not just river guides who have experienced the frightening mystery of Blacktail Canyon. Many visitors making their way down the river have reported hearing drums deep within the canyon in the evening hours, although the narrow slot canyon remains peaceful and inviting during the daytime.

Although scientists don't usually equate mysterious circumstances with the paranormal, mainstream geologists currently have no good explanation for the feature known as the Great Unconformity within Blacktail Canyon.

Additionally, the Great Unconformity is found not only here, but in many locatioins around the globe representing the same time periods.

So what happened to the 1.2 billion years between the two strata?

Scientists still haven't completely resolved that question, but new research in an area of the Ozarks Plateau suggests a tectonic plate shift of an ancient supercontinent, called Rodinia, could be responsible.

Some geologists, however, believe that the Great Unconformity is evidence of a well-known Biblical event: the Great Flood. They believe the rock that should have formed or deposited in the missing time frame was not eroded over millions of years by the Colorado River, as believed by mainstream geologists, but eroded in a very short amount of time by a massive flood event, such as the one recounted of Noah in Biblical times.

Canyon Corner
Think a river trip on the Colorado is a walk in the park? 'From Powell to Power' delves into river runners of the past
Grand Canyon celebrates Earth Science Week Oct. 14-20
The Grand Debate: young-Earth creationist sues feds for religious discrimination after research permits denied
Game offers adventures that promote Canyon knowledge
Event Calendar