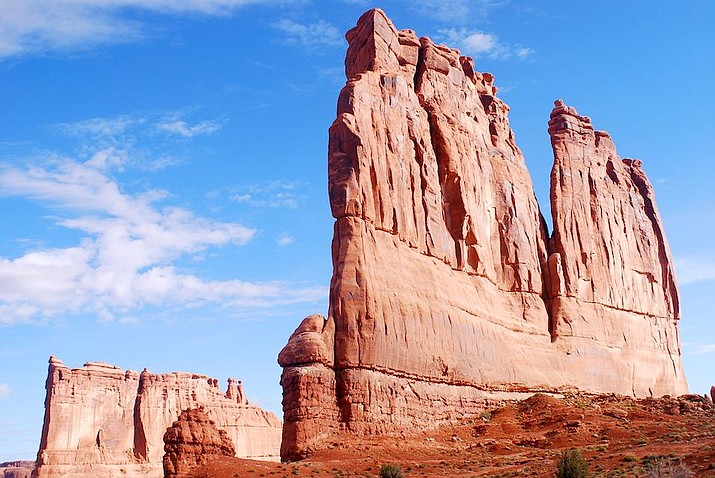 The Organ in Courthouse Towers, Arches National Park. A directive that would have allowed ORVs in Utah’s national parks has been withdrawn. (Photo/Kurt Repanshek)

With a three-paragraph statement late Oct. 25 the National Park Service announced without elaboration that it was withdrawing a previous order that national park units in Utah beginning November 1 open their dirt and paved roads to ATV vehicles that were registered and licensed for road travel in the state.

But there was pushback from Kate Cannon, superintendent of Arches and Canyonlands National Parks, and local officials in the Moab area, who were concerned about the potential impacts of ATVs.

“[In the past,] we acted through our own regulations to preclude the entrance of those vehicles into the parks, and that has stood for the last 11 years,” Cannon told an audience recently at a public meeting in Moab. “Now, there’s a proposal that that be changed, and we’re working right now to avoid that happening.”

National Park Service officials would not comment directly on their decision other than to distribute a release stating that, “(A)fter further consultation between the National Park Service and the Department of Interior, including the Secretary of the Interior, the NPS today directed that all ORV closures at national park sites in Utah currently in place will remain in effect.”

“Utah’s national parks and monuments are renowned for their wild landscapes, which inspire visitors and continue to deserve the highest levels of protection,” said Kristen Brengel, NPCA’s vice president of government affairs. “Park advocates and community leaders from across Utah and beyond recently came together and spoke with one voice, in the name of maintaining such protections surrounding off-road vehicle use. The Interior Secretary and Park Service clearly agree and are continuing the more than century-long mission of protecting unique and fragile resources that this generation, our children and grandchildren will enjoy.”

National park superintendents have worried that ATVs, which are designed to be driven off-road, would do so, and have long said there were not enough rangers to adequately police them. Too, there have been concerns over noise and pollution from the vehicles.

“The Park Service made the right decision to keep off-road vehicles out of Utah’s national parks and monuments,” said Steve Bloch, legal director for the Southern Utah Wilderness Alliance. “There are tens of thousands of miles of roads and dirt trails throughout Utah where these vehicles can be driven. Trying to shoehorn that use into the parks and monuments didn’t make sense and inevitably would have resulted in damage to the very things that make these places so remarkable and what visitors come to experience.”

When Jenkins issued the directive, his staff said it had long been in the works.

Vanessa Lacayo, a spokesperson for the Park Service’s Intermountain office, told Traveler in September that the change in policy could be traced back to 2008 when the Utah Legislature passed a law that allowed licensed and registered ATVs access to all state and county roads. Since that law was passed, she said, the Park Service has been in talks with the Interior Department’s solicitor’s office, park superintendents, Utah officials, and ATV groups to see how those vehicles could be allowed in Arches, Bryce Canyon, Canyonlands, Capitol Reef, and Zion National Parks, along with the national monuments in the state.

“We’ve been having these conversations with our solicitor’s office, with our parks, for several years now. And ultimately that’s kind of where we landed,” Lacayo said of the decision to open the parks to ATVs. “In order to be legally defensible, we have to default to 36 CFR 4.2, which aligns us with the state on this issue.”

While 36 CFR 4.2 does direct federal agencies to bow to state vehicle laws, the Park Service seemingly overlooked the controversial nature of ATVs and the requirements of 36 CFR 1.5, which states that, “(E)xcept in emergency situations, a closure, designation, use or activity restriction or condition, or the termination or relaxation of such, which is of a nature, magnitude and duration that will result in a significant alteration in the public use pattern of the park area, adversely affect the park’s natural, aesthetic, scenic or cultural values, require a long-term or significant modification in the resource management objectives of the unit, or is of a highly controversial nature, shall be published as rulemaking in the Federal Register.”

“We don’t have more information to share outside of what we included in the press release,” said Lacayo.

Phil Brueck, a former deputy superintendent of Canyonlands and Arches, called the decision “the right one for the future of our national parks.”

Outside of the five national parks in the state, other National Park System units that would have been affected by the change included Dinosaur, Hovenweep, Natural Bridges, and Cedar Breaks National Monuments.

The original article can be found at National Parks Traveler.