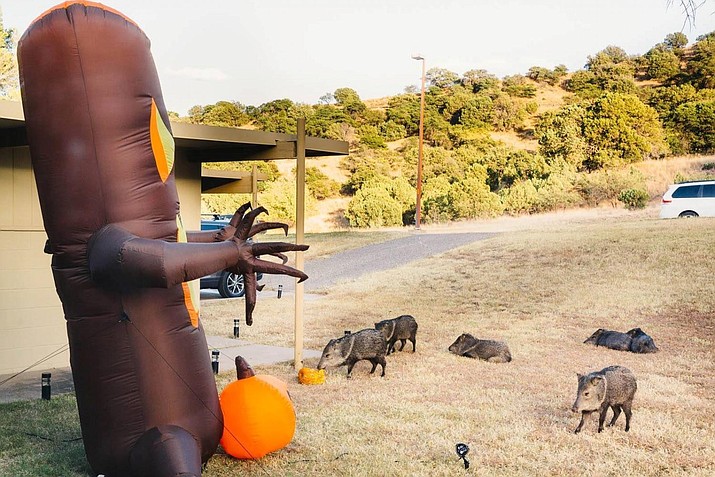 Javelina feast on Halloween pumkins left outside. The ripe squash can also attract coyote and even bears (Photo/AZGFD)

TUCSON, Ariz. — Arizona wildlife authorities have urged people against feeding wild animals after a woman who regularly feeds javelina in Tucson was bitten by one.

The Arizona Game & Fish Department in Tucson says they believe the woman was attacked Sunday because she got to close to a female javelina and its young.

Authorities believe the javelina would not have been there if she wasn’t routinely feeding them.

The woman says she was taking out her trash and turned around quickly scaring the javelina.

Authorities say the woman was treated and released from an urgent care facility Oct. 20 and recommended she receive a rabies shot.

No citations were made, but the case is still under investigation.

“A ripened pumpkin sitting outdoors is like candy for javelina,” said urban wildlife specialist Darren Julian. “Pumpkins and other edible decorations are easy meals for wildlife and often attract javelina, coyotes, deer and even bears.”

Authorities recommend keeping decorations inside the home or placed high off the ground where they cannot be reached by foraging wildlife.

Some information provided by AZGFD