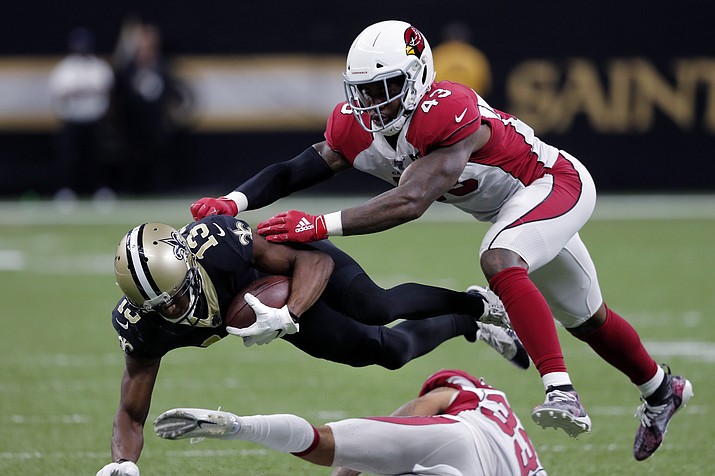 TEMPE, Ariz. (AP) — Arizona's three-game winning streak is over after a 31-9 loss to the New Orleans Saints and there's no time to rest.

The Cardinals have a bunch of banged-up running backs and a quick turnaround before Thursday night's game against the San Francisco 49ers, who are 7-0 and coming off an impressive 51-13 win over the Carolina Panthers.

"It's tough, but everyone deals with it," Arizona coach Kliff Kingsbury said. "Offensively, we had a good rhythm going with both those guys and when you lose them both, you've got to find other ways to move the football.

"That's what we're working through this week."

The Cardinals traded for running back Kenyan Drake on Monday, sending a conditional sixth-round pick in 2020 to the Miami Dolphins. Drake's presence should help but it remains to be seen how effective he can be considering he'll have just two days with the team before Thursday's game.

"He's an explosive guy who has been in the league for a while," rookie quarterback Kyler Murray said. "I definitely have confidence that he'll come in and make plays."

Arizona's defense played well against the Saints for three quarters before Drew Brees — who returned after missing five games because of a thumb injury — threw two fourth-quarter touchdowns. Brees finished with 373 yards passing and three touchdowns.