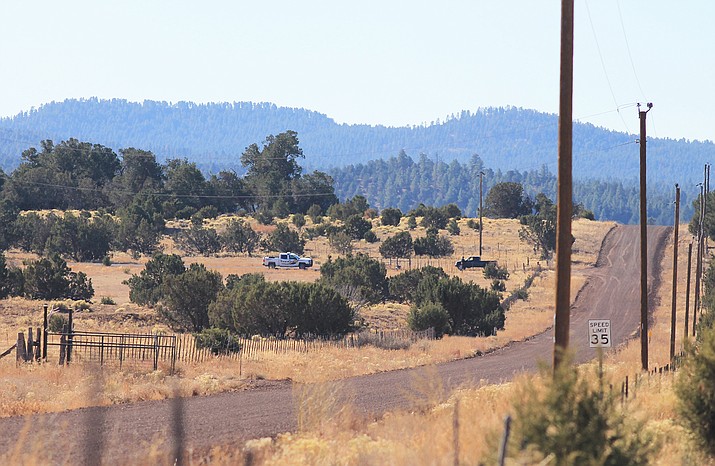 A Coconino County Sheriff's Office deputy provides security at a residence in the Red Lake area of Williams Oct. 28. CCSO said they are investigating a double homicide that occurred there last night. (Wendy Howell/WGCN)

WILLIAMS, Ariz. – Coconino County Sheriff’s Office has arrested a Williams man for the murder of his wife and her sister at a Red Lake home, north of Williams.

Rex Gilliland, a spokesperson for CCSO, said the office believed there was no further threat to the community.

Around 8:37 p.m. Oct. 27, CCSO received a call from an Arizona Department of Transportation trooper advising he had been driving on a county road in the Red Lake area when he was flagged down or stopped by the driver of a vehicle. The man approached the trooper and reported something to the effect that he couldn’t take it anymore and had killed his wife and her sister at their home. The trooper detained the man and called the sheriff’s office.

Deputies responded to the home address of the man and his wife and upon entering the home, found two females deceased inside the home.

The man was transported to Flagstaff by sheriff’s deputies. The suspect was interviewed by detectives where he made statements about his involvement in the deaths.

The case is being investigated as a homicide.

At this time, CCSO is not releasing the names of the suspect or victims pending notification of next of kin.