Northern Arizona astronomy: The theory of gravity and its history 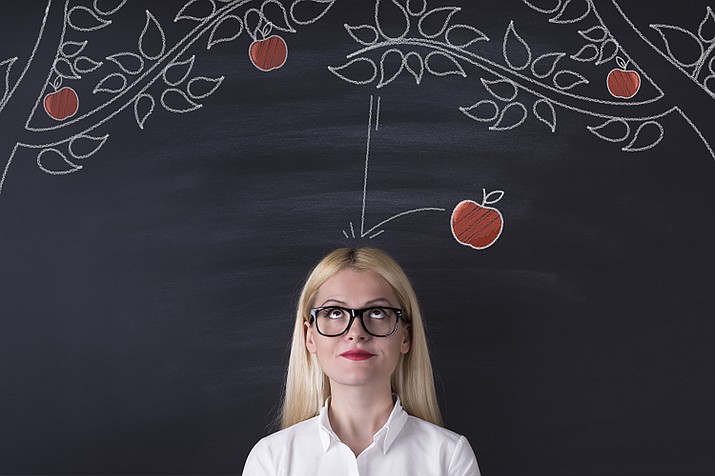 In the common vernacular the term theory is often used to mean a hunch, supposition, guess or speculation.

This is not the case in science, in which the word theory refers to a comprehensive explanation of an important property of nature which has been routinely supported by facts gathered over time. Theories also allow scientists to make predictions about as yet unobserved phenomena.

Constructing a theory is only one step of what is known as the scientific method, a process developed around the 17th century and used by researchers to carefully observe phenomena to try to explain observations. The first step is to create an hypothesis, which is an educated guess about how something works, and is an explanation that can be tested. A good Hypothesis will allow the observer to then make predictions. However, if the hypothesis fails to make accurate predictions, then the researcher must either reject or modify the hypothesis and re-apply questioning until accurate predictions bear fruit.

Once confidence is achieved with his or her results, the scientist will then submit a paper to a research journal to be peer-reviewed by experts in the field to ensure its quality and validity. If accepted as suitable, the journal will publish the work. Over time, other scientists will re-examine the work, do their own experiments and gather new data. If the hypothesis continues to hold fast for a long time, making valid predictions, only then it will be elevated to the status of a theory. A theory may be continually tested. And as technologies become more advanced, occasionally theories, even long-held ones, may be found in need of some modification.

For millennia the Earth was thought to be flat. However, thousands of years ago mariners had observed that when their ship went to sea, as it sailed further from port, the land appeared to eventually slip out of view below the ocean. From a land observer's perspective, the ship did the same. This could only be explained by the fact that the Earth was curved.

Around the year 100 BCE, the Alexandrian mathematician Eratosthenes (276-194 BCE) calculated the Earth's circumference. He knew that at local noon on the summer solstice in Syene (modern-day Aswan, Egypt), the Sun was directly overhead. (Syene is at North Latitude 24°05′, close to the Tropic of Cancer, which was 23°42′.) He then measured the Sun's angle of elevation at noon in Alexandria on the same day using a vertical rod that cast a shadow on the ground. By measuring the length of the rod, and the length of the shadow, as the legs of a triangle, he calculated the angle difference of the Sun's rays between the two locations to be about 7° or 1/50th the circumference of a circle. Assuming the Earth was spherical, and knowing both the distance and direction of Syene, he concluded that the Earth's circumference was fifty times that distance. Since then there have been many proofs that the Earth is round, not to mention the direct observations of modern satellites and astronauts.

Prior to Nicholas Copernicus (1473-1543 CE) publishing his "On the Revolutions of the Heavenly Spheres" in 1532, the model of the solar system proposed by Ptolemy (100-170 CE) had been the accepted mechanism by which the heavens were governed - Earth was at the center of the universe. Stars were held in place by crystalline spheres, and the aberration of the motion of planets was explained by large circles called deferents and epicycles. With this model, planetary motions were fairly accurately calculated. However, when Copernicus came along, he placed the Sun at the center, relegating Earth to the position of just another planet. Although this made planetary position calculations less complicated to compute, they were no more accurate, since Copernicus assumed circular orbits which still required some epicycles.

Johann Kepler (1571-1630 CE), using the precise planetary data of Tycho Brahe (1546-1601 CE), realized the orbits of the planets were not circles, but rather ellipses, and with this knowledge, he was able to accurately predict the planetary motions with three mathematical expressions, now known as Kepler’s Laws. However, his laws did not provide any mechanism as to why they worked, i.e. there were no forces, masses or gravity involved in the equations.

It was not until 1687, when Isaac Newton (1643-1727 CE) published his work encompassing his three laws of motion and his ideas on universal gravitation that tied together Keplers works and incorporated the ideas of mass, force and acceleration (including gravity.) It would not be until 1915 that Albert Einstein (1879-1955 CE) modified the gravitational laws with his General Theory of Relativity, which accounted for situations when matter approached the speed of light. When things are travelling at normal speeds they still obey Newton’s Laws, which are a subset of Einstein’s ideas.

Claims that do not provide reasonable and testable explanations of nature, and do not have predictive capabilities, are not science, nor theories, but are considered at best conjecture, or at worst pseudoscience.