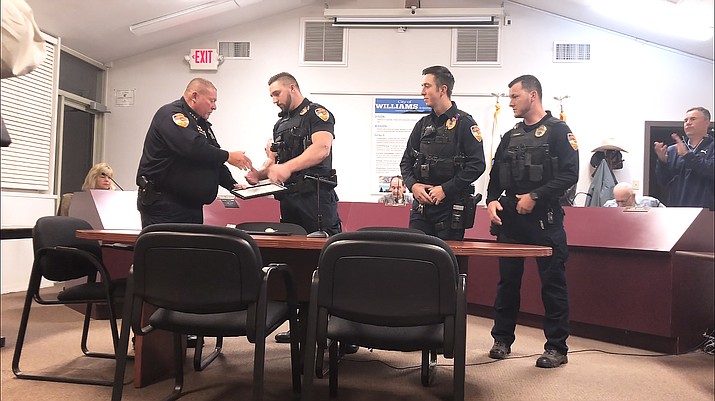 WILLIAMS, Ariz. — Williams Police Officers Tyler Forbes, Thomas Sanders and Kohl Nixon were honored Oct. 10 for their actions during a 911 call in June.

Williams Police Chief Herman Nixon recognized the officers with each of them receiving a “Life Saving” award for their outstanding performance, professionalism and courage.

On June 14, officers of the Williams Police Department received a 911 call regarding a male subject who was having a medical crisis at La Quinta Inn at 1100 W. Cataract Road.

As the officers and Life Line ambulance arrived at the La Quinta Hotel, the male subject became unresponsive — not breathing and having a cardiac crisis. The officers began life saving measures by performing CPR on the unresponsive male subject while assisting Life Line personnel. The subject was stabilized and transported to Flagstaff Medical Center for further medical treatment.

“You acted in your official capacity as a police officer and in a professional manner carried out those duties which are expected of you in this type of incident,” Nixon said. “By conducting yourself in such a manner, you displayed those virtues this department seeks in its officers. You came to the aid of a fallen citizen which is well beyond the call of duty.”

Nixon said Fire Chief Robert Trotter from High Country Fire Department was one of the Life Line personnel on scene and told Nixon that without the officers’ assistance, the patient would most likely not have survived.