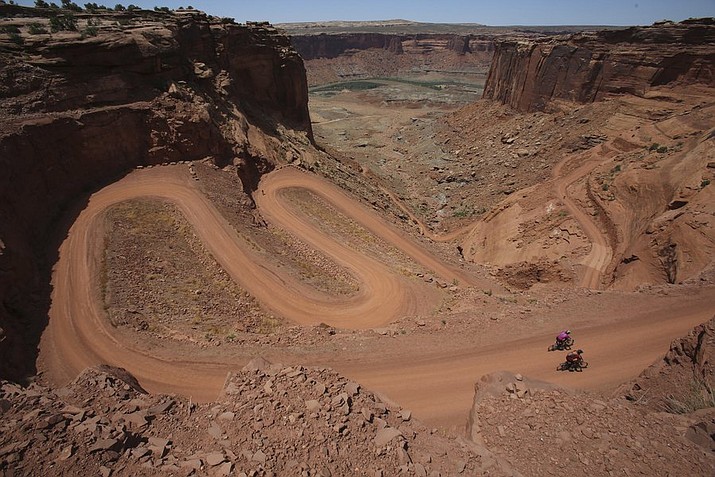 Mountain bikers near the end of a 75-mile trip as they climb Mineral Bottom Road after riding the White Rim Trail in Canyonlands National Park. Street legal off-road vehicles would be allowed on this and other roads in Utah's five national parks under a directive issued by the National Park Service's regional office. (Francisco Kjolseth/The Salt Lake Tribune via AP)

SALT LAKE CITY — Utah officials in a large tourist community have asked the National Park Service to reconsider allowing all-terrain vehicles and other off-road vehicles inside the parks.

Allowing all-terrain vehicles in the parks would have a negative impact on the visitor experience and resource and wildlife protection efforts, said Moab Mayor Emily Niehaus and Castle Valley Mayor Jazmine Duncan.

“If we allow them in the park, we will fundamentally alter the experience of all visitors to the backcountry roads in our parks here,” Moab resident Michael Grandstaff told Grand County council members. “We are so lucky to have those. Most parks don’t have those types of dirt access roads.”

Utah parks discriminated against all-terrain vehicle operators by arbitrarily favoring Jeeps, four-wheel-drive pickups, dirt bikes and other vehicles capable of going off road, some residents said in favor of the park service directive.

Each state park was ordered to allow off-road vehicles on roads open to conventional vehicles by Nov. 1 but upheld a strict ban on off-road use, park service officials said. Under the directive, up to 227 miles of paved and 487 miles of unpaved roads are open to off-road vehicles.