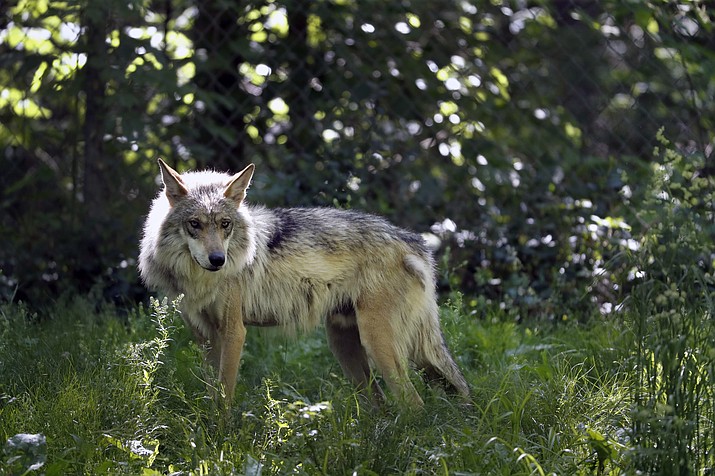 Dozens of environmental groups and scientists are asking U.S. wildlife managers to rethink how they plan to ensure the survival of Mexican gray wolves in the American Southwest. (Jeff Roberson/Associated Press)

ALBUQUERQUE — Dozens of environmental groups and scientists have asked U.S. wildlife managers to rethink how they plan to ensure the survival of Mexican Gray Wolves in the Southwest.

Following a loss in federal court last year, the U.S. Fish and Wildlife Service is crafting a new rule to guide management of the endangered predators in New Mexico and Arizona.

In a letter Oct. 16 to U.S. Interior Secretary David Bernhardt and federal wildlife managers, the coalition said the rule should be based on "an entirely new approach" that incorporates the best science while acknowledging the recovery effort's past shortcomings.

"Please do not keep going in the same fruitless direction that has not even met your own metrics, but instead chart a new path that will actually recover the Mexican Gray Wolf," the letter states.

The Fish and Wildlife Service said Oct. 17 it is using the best available science to craft a plan for the wolf that can be accommodated within the species' historical range in the Southwest and in Mexico.

The agency is under a court mandate to revise the wolf management rule by May 2021. Officials say they plan to meet that deadline while seeking peer review and public comment.

"We remain committed to our goal of working with partners to address the threats facing Mexican wolves and ensure the recovery of the subspecies," Brady McGee, the Mexican wolf recovery coordinator, told The Associated Press in an email.

The rarest subspecies of gray wolf in North America, Mexican wolves have struggled to gain ground since the first release in 1998 because of poaching, politics, legal challenges and even complications from a lack of genetic diversity.

Mexican wolves are in a more precarious position than other gray wolves in the U.S. because of their limited numbers. The most recent survey showed there were at least 131 in the wild in the southern mountain ranges of New Mexico and Arizona.

There are an estimated 30 wolves in the wild in Mexico.

The population is still far from where biologists had initially envisioned by now.

In their latest plea, environmentalists and professors from around the U.S. continue to call for the release of more captive wolf families to boost the wild population and its genetic diversity. They also complained about removals of wolves from the wild, saying more can be done by managers and ranchers to ensure protection of livestock.

The coalition also has concerns about limiting the physical boundaries of the recovery program, saying wolves should not be removed if they roam farther north.

Ranchers and others in rural communities that border wolf territory have pushed back, citing livestock kills and safety concerns. With more wolves in the wild, ranchers point to an increase in conflicts.

According to officials with the recovery program, there were 21 confirmed incidents involving wolves and livestock in September. In all, there have been 165 livestock kills this year in the two states.

There also have been wolf fatalities. In 2018, 21 wolves were found dead, marking the deadliest year since reintroduction began. Nine deaths have been reported this year.

Environmentalists point to last year's court decision as the latest "flashing-red warning light," saying the previous management rule violated the Endangered Species Act by failing to conserve the wolves and for not relying on the best available science.

"This time the Fish and Wildlife Service must get it right — follow the law, follow the science, and push back on the political interference, which has led to flawed decisions that jeopardize the very existence of the iconic lobos," said David Parsons, former coordinator of the Mexican wolf recovery program.

The coalition is asking that wolves be declared an "essential" experimental population and that the process to revise the wolf rule be public. Those who signed on to the letter say a range of alternatives should be considered and benchmarks set.