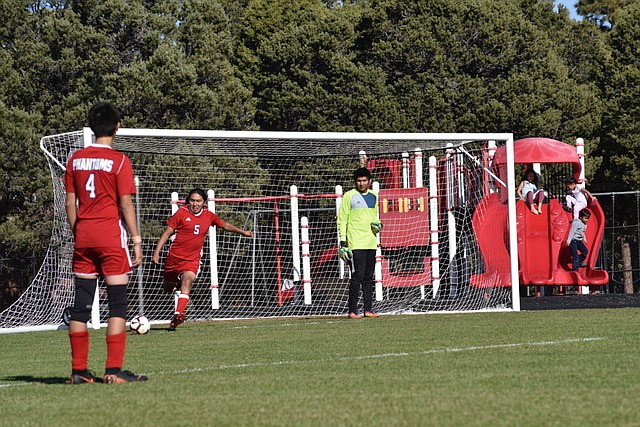 Rufus Keebahe clears the ball away from the goal during the Phantoms' win over Rancho Solano Prep Oct. 18. (Photo/Cyndi Moreno)

Grand Canyon athletes, both men and women, often play multiple sports, along with keeping their grades up and being active in the community. On the volleyball court and the soccer field, both teams have had winning seasons and are looking forward to the playoffs.

The Phantoms are enjoying their first winning season since 2014. That season, the team went 2-9 overall and have been making steady improvements since. By working on fundamentals and ball movement, the team has developed a quick, high scoring offense led by senior Nolan Lyle. Lyle has scored 10 goals in the Phantoms’ last three games and 29 overall on the season. Seniors Rufus Keebahe and Melakai Longhoma, along with junior Jared Torres Maldonado and freshman Roman Evans have helped the Phantoms achieve a balanced scoring attack.

The Phantoms were able to step up their defense as well, allowing only nine goals in the last five games and holding all but three opponents to two goals or less per game on the season.

The Phantoms will play their last regular season game Oct. 25 on the road against the Page Sand Devils. The state tournament quarterfinals begin Oct. 30. Based on the Phantoms’ third-place conference standing, they are guaranteed a bid, along with Chino Valley and Camp Verde.

Although the Lady Phantoms are sitting at an even overall record of 7-7, the team won seven of their first eight games under new head coach Elyse Moreno, including some inpressive wins over conference rivals Joseph City, Mayer and Camp Verde. The Phantoms also crushed Fredonia twice before dropping tough games to rivals Ash Fork, Williams and Mogollon.

Many of the sets were close, with the Lady Phantoms within five points.

The Lady Phantoms face off in their final two games of the season at home against Ash Fork Oct. 25 and Mogollon Oct. 26. The state tournament begins Oct. 29 at Mogollon High School.