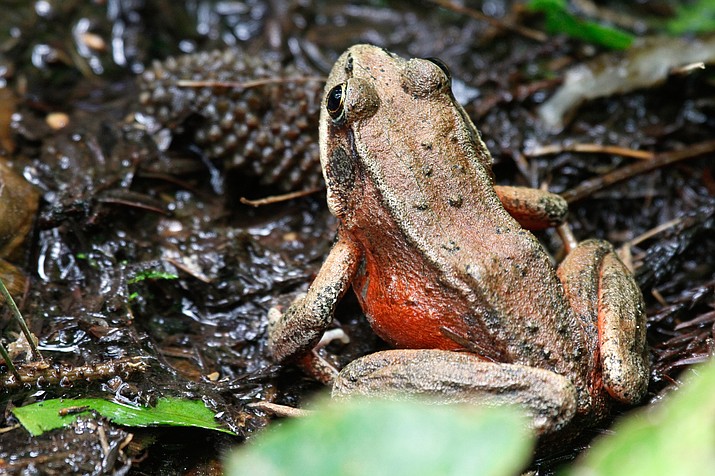 THOUSAND OAKS, Calif. — A total of 28 adult California red-legged frogs (Rana draytonii) were discovered in the four translocation sites that were set up by National Park Service biologists in 2014 in an effort to re-introduce the threatened species back into the Santa Monica Mountains.

During a number of night surveys that took place over the last few weeks, a handful of these amphibians were found in each of the four reintroduction sites, a discovery that amazed Katy Delaney, a National Park Service ecologist who has been leading the project since 2011. A huge wildfire followed closely by catastrophic mudslides could have potentially meant the end for these small, nocturnal amphibians.

The project stemmed from the idea of using a source population of frogs found in the nearby Simi Hills that could help reintroduce the species in the Santa Monica Mountains in four streams. Biologists hypothesized that they would eventually mature, mate and reproduce on their own.

California red-legged frogs have not lived in the Santa Monica Mountains since the 1970s. They are listed as federally threatened under the Endangered Species Act and they are a state species of special concern.

While the discovery of 28 adult frogs is positive, the future of the population in the Santa Monica Mountains is unclear.

“I still don’t know what’s going to happen, but it’s a big deal that these frogs survived the fire and the mudslides,” Delaney said. “I think that the fact that they survived all of that is extraordinary.”

Froglets, the stage in a frog’s life cycle that occurs after they are tadpoles, were found at two of the sites. Earlier this spring, tadpoles taken from the source population and hatched at the Santa Barbara Zoo, were released in two of the streams.

Biologists surmise that older frogs were able to tough out a devastating wildfire and the subsequent mudslides that quickly followed.

Another question biologists have regarding this sensitive species is if they will be able to breed on their own next spring.

To breed, frogs require deep breeding pools of year-round water and foliage, like willow. Female frogs lay their eggs underwater, but often near the surface. The egg masses are usually attached to willow roots or submerged sticks.

The important aquatic habitat and vegetation needed to successfully breed no longer exists in three of the four streams that were badly burned. Almost one year later, these streams are filled with silt, mud and debris.

Exactly one year ago, in the weeks prior to the fire, the rare amphibians were flourishing and reproducing on their own in two of the four streams spread throughout the mountains. There were a number of frogs living in each of the four streams — from tadpoles to grown adults. After the Woolsey Fire in November 2018 and the subsequent mudslides, biologists saw only two frogs - one at each of two sites.

In the other two reintroduction streams, the frogs were too young to breed in November 2018 when the Woolsey Fire swept through these sites. This year would have been the year for breeding with this specific grouping of frogs.