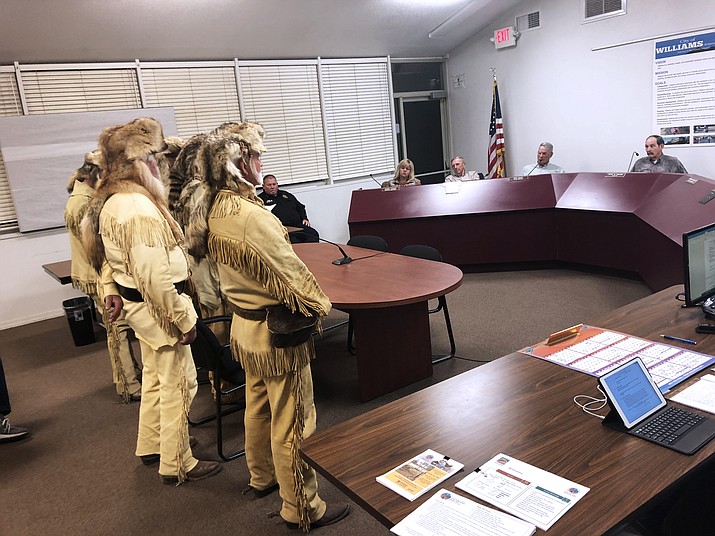 WILLIAMS, Ariz. — The Bill Williams Mountain Men are on a mission to bring the organization back to its roots in Williams.

“We opened our membership up state-wide and a lot of our members were from the Phoenix area,” said 25-year member Jeff Ashworth. “They wanted to do the fundraisers down there and then our membership began to dwindle.”

Zovod, who was accompanied by several other mountain men including Ashworth, Brian Eagan, Darren Harwood and Arnie Sleeper, addressed the Williams City Council Oct. 10 about their vision to bring the group’s focus back to Williams.

“We are looking for any ideas or suggestions on how we can gain more support, more members and more horseback riders,” Zovod said. “We are looking to find people who enjoy this and want to have fun.”

Zovod said the group is currently looking at opportunities to raise money and awareness throughout the Williams community.

Over Labor Day, the group provided burgers and hotdogs and hosted a fundraising raffle at the Sultana Bar.

“One of things that is going on as part of our commitment to Williams and state of Arizona is community participation,” Zovod said. “And to that end we’ve done

schools, hospitals and retirement communities promoting the history of the mountain men of the west.”

In the past, the mountain men have raised money to sponsor scholarships, provided donations to charities and non-profit organizations and purchased eye glasses and wheelchairs for those in need.

“Recently we provided financial assistance to an elementary school for a field trip they wanted to take,” he said. “In the past we have done WHS scholarships, but unfortunately with our numbers and attempts at building the organization, we discontinued that a few years ago.”

Zovod said there are currently 16 members of the Bill Williams Mountain Men with five more local riders interested in joining.

“I agree over the last couple of years we’ve been absent,” Ashworth said. “We don’t want to be that way anymore. Not as many members want to get on a horse and ride for six days like there used to be. But we are building that membership back up. And now we have members that are from the community up here and we want to get involved and give back.”

Mayor John Moore applauded the efforts of the mountain men to bring the organization back to Williams.

“My feeling is that the Bill Williams Mountain Men have kind of abandoned Williams, present company excluded,” he said. “We support the mission and we would like to see you bring the banquet back to Williams. It would be nice to see you work with the community and schools. We will help you fix it.”

History of the Mountain Men

In 1953, a group of local businessmen gathered at Diz’s Tavern in downtown Williams and formed the Bill Williams Mountain Men with the goal of commemorating the hardy group of men who forsook civilization for the lonely life of a trapper on the western frontier.

They adapted their name from the 1800s-era William Sherley Williams, a hunter, scout and the town’s namesake, who was known as Old Bill.

The original group hoped to perpetuate the lore, memory and romance of Williams, for whom a town, river and mountain were named.

The annual rendezvous trip originated with the idea of replicating the mountain man’s emergence from the mountains in spring with pack mules loaded with furs to sell.

Each year since 1954, the Mountain Men have made a one-week 200-mile pilgrimage from Williams to the Phoenix area by horse or mule.

The mountain men are easily recognizable today, since they still wear what their forefathers wore: buck skins and hats made from skunks, foxes, coyotes and bobcats.

The Bill Williams Mountain Men have been invited to participate in five different presidential inauguration parades — the most memorable of which was the inauguration of John F. Kennedy in 1961.

Several governors have named the Bill Williams Mountain Men Official Arizona Ambassadors. The mountain men are also listed as a local legacy in the Library of Congress.

The mountain man tradition spans generations. Williams resident Bob Dean has been a member of the Bill Williams Mountain Men for 52 years. Dean’s father Denton “Diz” Dean was one of the founding members of the group, and Bob joined in February of 1965.

More information on the Bill Williams Mountain Men is available from Zovod at (928) 710-1591 or at davidz@advancedcybersecurity.com.