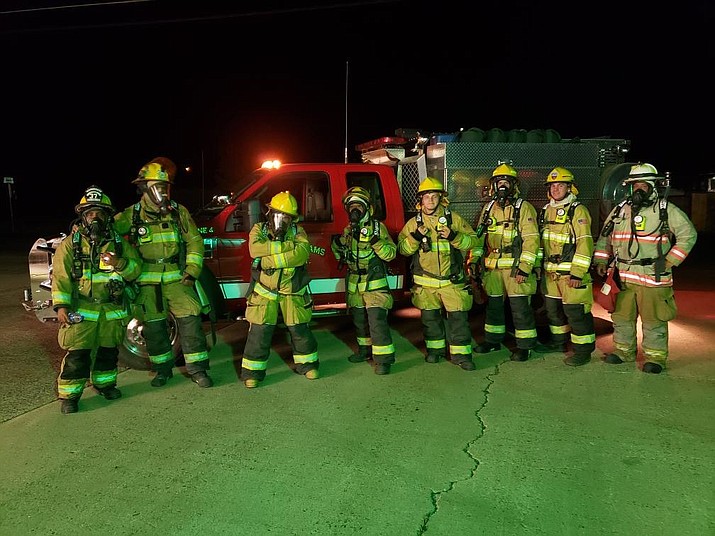 During a September training, Williams firefighters donned full gear and hiked through Williams from Station 1 to Station 2 to work on air conservation and breathing. (Photo/Williams Volunteer Fire Department)

In September, Williams Fire Chief Kevin Schulte reminded members that there will be a minimum of three personnel available to respond to any incident that occurs within the city before responding to any incident outside of the city limits

Kaibab National Forest distributed haul route information for the steep slope thinning project on Bill Williams Mountain. Forestry will be using the route when hauling wood from the project. The wood will be chipped on-site and hauled in chip vans to Novopower in Snowflake.

Sept. 1, E Route 66 — WFD responded to Bearizona for a smoke report. Located reporting party and could not identify actual location or smoke of reported fire. Traveled through park and tried different locations but were unable to locate any fire.

Sept. 1, I-40 WB MP 158 — WFD responded to a report of a rollover. Arrived on scene and found vehicle on its roof. DPS and LifeLine were on scene, patient was checked for injuries. Assessed vehicle and found no flammable leaks and did not cut battery cable due to access difficulty.

Sept. 2, I-40 WB 149 — WFD responded for a semi with brakes on fire. When Engine 7 arrive on scene units found that there was no fire or smoke, tractor had detached from trailer due to the load being aerosol cans. Crewmembers then investigated with a thermal imaging camera for any other hot spots on the rear of the tractor and found nothing. Seligman Fire Department also responded with an engine and chief’s support truck.

Sept. 4, I-40 EB MP 154 — WFD arrived on scene to a vehicle vs semi accident. Upon arrival vehicle was being moved to the side of interstate and patients were being loaded. Semi was on its side and had small rupture in driver side tank. Rupture had stopped leaking and Ash Fork Fire had arrived on scene.

Sept. 5, E Route 66 — WFD responded to a report of a mattress fire. Upon arrival found mattress outside being extinguished by occupant. Fire was out upon arrival. Occupant stated they were trying to get rid of bed bugs with a lighter when the mattress caught fire. No exposures. Performed overhaul and sprayed remaining material with water extinguisher and foam.

Sept. 6, E Franklin — WFD responded to a report of swarming bees. Upon arrival found tree stump which bees had inhabited previously. Children in the area were moved back and stump was foamed.

Sept. 7, Williams Gun Range — WFD responded to a suspicious package outside of gun range gate. Upon arrival found white bucket hidden behind the base of a tree with three smaller plastic containers inside. Smaller containers had markings on them. Upon further investigation items were identified by ADOT as core samples from freeway.

Sept. 11, S 6th Street — WFD responded to report of a down power line. Arrived on scene with WPD. PD had already called for APS service. Cleared area and determined down line was actually an internet line not electrical. Cancelled APS and removed hazard from residence.

Sept. 12, I-40 WB MP 147 – WFD was dispatched for a semi fire. Dispatch advised that DPS and Ash Fork Fire were on scene. Engine 7 and Tender 1 were due to traffic congestion. While en route crews contacted Ash Fork Fire and were updated to cancel response.

Sept. 13, S 6th — WFD responded to a single family residence with smoke detector activating inside. Windows were open slightly with locks and fire department were able to visualize parts of the home and no obvious hazard noted. Circled building and laddered south side to visualize attic, again no hazards noted. Attempted contact with owner and left a voicemail and text message.

Sept. 14, W Route 66 – WFD responded to a medical report of a 65 year old man at Canyon Club. Witness reports patient fell down and had a seizure. Physical exam found large hematoma to the back of the head with no bleeding. Patient care was transferred to Lifeline.

Sept. 14, I-40 EB MP 163 —WFD responded to report of traffic accident with injuries, cancelled prior to enroute.

Sept. 22, W Fulton — WFD responded to report of smoke coming from a yard at address. Arrived on scene and found an unattended fire pit. Extinguished smoldering logs and owner came outside. Advised owner not to leave the fire pit unattended and extinguish before leaving.

Sept. 28, N Grand Canyon – WFD responded to report of an motor vehicle accident with fuel leaking. Arrived on scene and found one semi had t-boned another semi in the parking lot. Fuel tank had been pierced by supporting bolts. Leaked approximately 15 gallons of fuel. Applied absorbent and workers at Loves stated they would work on draining the rest of the tank.