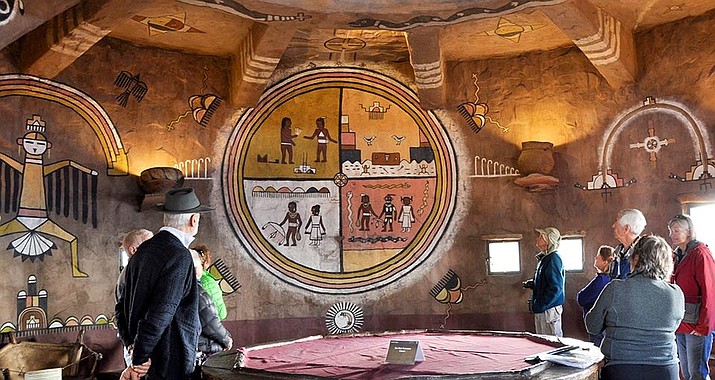 Visitors view murals on the second floor of Desert View Watchtower after the completion of conservation work. The murals were painted by Hopi artist Fred Kabotie in 1932. (Photo/NPS)

GRAND CANYON, Ariz. — The red, yellow, blue, brown, black and white hues on the walls and ceilings of the Desert View Watchtower are once again vividly on display. Over the past four years, the historic tower at Grand Canyon National Park’s Desert View area has undergone extensive conservation and graffiti remediation work on the interior to conserve the murals that were painted in 1932.

Since 2015, one floor of the five-story tower was completed each year in six to eight-week segments, with work on the fifth floor concluding over the past weekend. The conservation effort, completed by Conservation Associates of Santa Fe, New Mexico, began with a comprehensive condition assessment of the tower.

The assessment portrayed damage caused primarily by wind, rain and snow leaking through the stone masonry, resulting in salt deposition on the ceiling and walls, cracked plaster throughout the building, as well as natural and human caused wear and tear from visitor usage over the past eight decades.

The most recent segment of the project focused on graffiti removal and repairs to the walls and wood features in the fifth floor Eagle’s Nest also known as the Telescope Room.

“In the worst areas of damage, the conservationists filled deep gouges where names had been carved into historic window sills and staircases. They then used conservation toning techniques to recreate the natural pigments in the wood,” said Jenn O’Neill, Grand Canyon National Park’s partnerships and planning coordinator. “A different removal technique was required for each type of graffiti caused, for example, by permanent markers, nail polish or pens.”

In the lower floors, where the work was focused on the murals, conservation-grade materials were used to stabilize and preserve the remaining pigments in the imagery of the murals, and areas of salt deposition were removed.

“This is the largest conservation project conducted within the tower since it was built and the murals were painted,” said Craig Chenevert, Grand Canyon National Park’s historical architect. “All of the conservation work conducted is reversible should a better conservation technique be developed in the future.”

Desert View Watchtower, designed by architect Mary Colter, is modeled after the architecture of the ancestral Puebloan people of the Colorado Plateau. Fred Kabotie, a Hopi artist, painted the Hopi room, and Fred Geary painted the two galleries above the Hopi Room with drawings from ancient kivas, caves and cliff walls.

The Desert View area has been used as a gathering place for thousands of years, and it currently represents the physical and cultural gateway from Grand Canyon National Park to tribal communities.