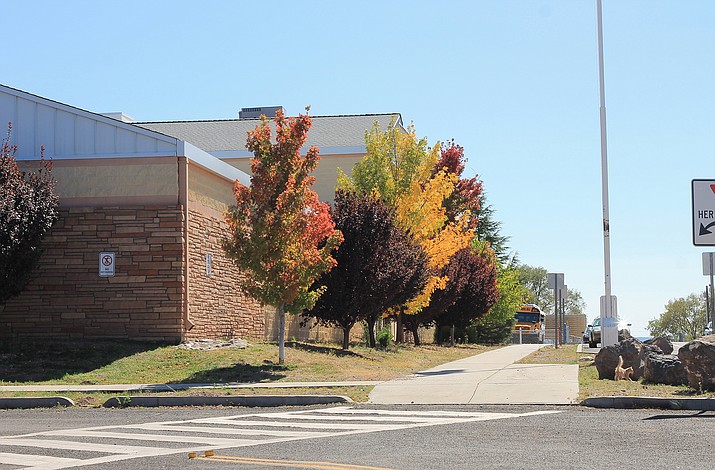 ASH FORK, Ariz. — Ash Fork Elementary School was among five in the state recently named a National Blue Ribbon School by the U.S. Department of Education.

The school is being recognized as an exemplary high performing school as measured by state assessments and nationally normed tests. Other schools were recognized for exemplary achievement after closing an achievement gap.

Ash Fork Elementary will be among the 362 National Blue Ribbon Schools celebrated Nov. 14 and 15 in a Washington, D.C., awards ceremony.

The school was nominated by the state in January, and Staples said he and other school personnel completed a lengthy application to be considered for the award.

Staples said the organization was interested in the school’s academic performance, especially as a school-wide Title I school.

“They also asked about climate and culture,” he said.

Since the 2013-2014 school year, Ash Fork Elementary has been recognized as a top performing school.

Staples said he credits the staff and students for the school’s success. He said a focus on standards, high expectations, real-life applications, differentiated support and constant monitoring of each student has resulted in state tests showing significantly higher achievement than the state average. 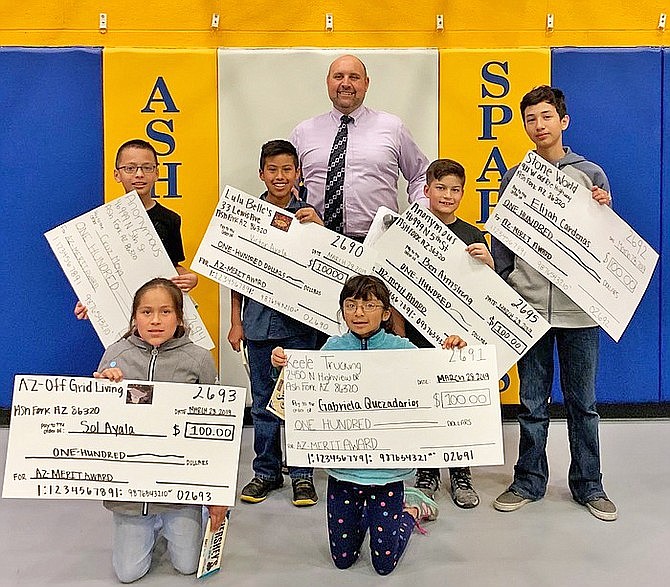 Ash Fork students received $100 for achieving a perfect score on the AzMerit in 2018. (Photo/Ash Fork School)

For grades three and four in 2017-2018, the percentage of students scoring highly proficient on AZ Merit tests in English was more than double the state averages of all public and charter schools.

Staples said for both mathematics and English, teachers assess students after instruction, then group students for reteaching and enrichment based on the results.

The schedule for the school is nine weeks on and two weeks off.

“(There) are six to seven standards to be mastered in those nine weeks,” Staples said. “It helps us break up the year and focus on those standards.”

Staples said if students don’t pass the assessments they come back for intersession during the two week break.

“So its motivation for the kids to not have to come back,” he said. “But when they do come and work in the small groups and pass the standards, they can go on with the rest of the kids into the next quarter.”

Staples said the school has daily intervention time for students, but the four-day school week allows for additional tutoring on Fridays and before school.

“If you stay here at school, you are going to learn,” he said.

Staples said the low turnover and dedication of the staff is key to the success of the school. He said Ash Fork has a limited but multi-skilled staff, which allows the district to pay higher salaries than other area schools. The average teacher salary for 2019 in Ash Fork is $57,250. The average salary for teachers in Williams is $40,249 and Grand Canyon is $43,693.

“We do have the philosophy to keep our staff minimal, but we try to empower and find areas those staff members are good at, and let’s pay them for that,” he said. “For example, our social studies teacher is also excellent at academic counseling, so we pay him an additional stipend to be an academic counselor. Our size enables us to do that.”

Staples said although higher pay is helpful, he believes that helping teachers feel good about what they are doing is more important. He said the district has a rigid teacher evaluation instrument which challenges teachers to do their best.

“We give them a plan and what to do — give them some ideas — and they’re successful,” he said. “Feeling good about what you are doing every day in your job is bigger for those teachers than just the pay.”

Staples said one of the biggest challenges the district faces is mobility, or students changing schools mid-year.

“Our mobility is 40 percent, but it’s amazing how our elementary team is able to grab them and get them going,” he said.

Staples said the demographic of the school can also pose challenges. Of the school population, 81 percent qualify for free/reduced lunch and 48 percent are Hispanic.

“A large percentage of students are Hispanic and have family members living in Mexico,” Staples said in the school’s application. “Many of the Hispanic students do not come back to Arizona until late August or September. Some families leave to visit Mexico before school is finished. Frequently such students continue each year, but are not enrolled during the entire year.”

A road to success

In the past few years, Ash Fork Joint Unified School District has transformed from a struggling district to a top-performing district. In 2010, the district received the equivalent of a D rating from the Arizona Department of Education for student performance.

Staples said the school was in danger of the state stepping-in to run the school.

A school improvement grant and some new ideas helped get the district back on track. Using other successful districts as a model, Staples started focusing on student engagement and how teachers were delivering the curriculum.

He said the school had been following a textbook model of teaching, but after consulting with excelling districts they decided to follow a curriculum map throughout the year and find their own resources.

For the 2012-2013 school year, the district tied for ninth place on the Arizona Department of Education’s list of top-performing districts in the state. In 2013, school board member Barry Sharp received the All-Arizona School Board Award, high school math teacher Sonny Martin was named the overall Yavapai County Teacher of the Year, and middle school language arts teacher Jeaneen Leach was named the county’s small schools teacher of the year.

For the 2013-2014 school year, the Arizona Department of Education named Ash Fork the number one performing district in the state, and Staples received the 2014-2015 All-Arizona Superintendent of the Year award for small districts for his efforts.