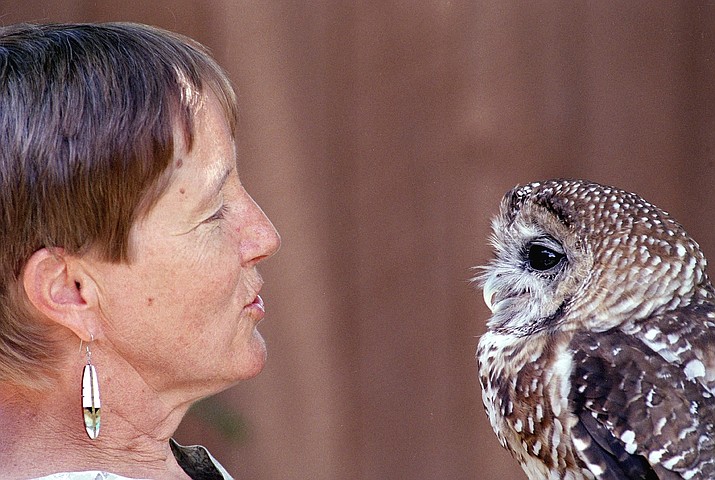 In this a July 11, 2002, file photo, Dr. Kathleen Ramsay gets the attention of "Manchado," a Mexican Spotted Owl at the Wildlife Center near Espanola, N.M. A federal judge has halted tree-cutting activities on all five national forests in New Mexico and one in Arizona until federal agencies can get a better handle on how to monitor the population of the threatened owl. The order issued earlier Sept. 2019, out of the U.S. District Court in Tucson covers 18,750 square miles. (AP Photo/Neil Jacobs, File)

ALBUQUERQUE, N.M. (AP) — The U.S. Forest Service wants a federal judge to reconsider an order that halted tree-cutting across thousands of square miles of forest in the Southwest, saying efforts to address wildfire threats are hanging in the balance.

The order was issued last month in a 2013 case that alleged the agency failed to consider the effects of thinning and logging on the threatened Mexican spotted owl and its habitat.

Environmentalists say the U.S. Fish and Wildlife Service and the Forest Service have failed over the years to track the bird's numbers.

U.S. District Judge Raner Collins in Arizona agreed, sidelining timber management activities until the federal agencies come up with a way to count the owls as part of a recovery plan.

In a request filed with the court late Thursday, the Forest Service states that projects aimed at clearing overgrown forests and reducing the threat of catastrophic fires would be compromised until at least 2023 when data on owl population trends is expected.

The Forest Service described the situation as an injustice that resulted from "a misapplication of law and fact."

"Delaying these projects increases the threat of future large and severe fires which undermines USFS's conservation efforts — not to mention the health and safety benefits to surrounding communities," the filing states.

The ban that resulted from the court ruling excludes personal firewood cutting permits that rural residents rely on to heat their homes and to cook. However, it does prohibit thinning projects, prescribed burns and commercial wood cutting across all five national forests in New Mexico and the Tonto National Forest outside Phoenix.

WildEarth Guardians also has asked the judge to order the parties into mediation to further define the ban.

John Horning, the environmental group's executive director, said WildEarth Guardians is willing to release from the ban forest activities that do not harm the owl.

As a result of the Forest Service's action, he said Friday that the agency is seeking to re-litigate the case rather than resolve it.

"The Forest Service is trying to convince the judge that he got it wrong in the first place," Horning said. "This strategy delays the opportunity for people to get back to work maintaining trails, securing wood products for ceremonial and religious purposes and thinning forests in dire need of that work."

In the six affected forests, federal officials identified 22 timber management projects that span more than 12,500 acres that are outside areas that have been designated as critical for owl recovery. Another five projects are located partially within such areas.

The agency says the court should allow activities to proceed in those portions outside of owl habitat.

Court documents show there are 33 prescribed fire projects partially or completely within owl habitat and another 30 outside of owl habitat that are halted in the region.

First listed as threatened in the U.S. in 1993, the Mexican spotted owl is found in Arizona, New Mexico, Colorado, Utah, parts of West Texas and Mexico.