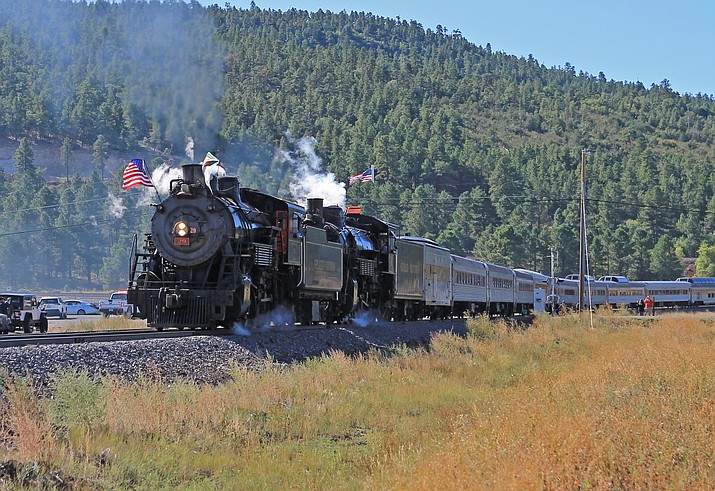 The Grand Canyon Railway celebrates its 30th anniversary Sept. 17 with a double steam train to the Grand Canyon. (Wendy Howell/WGCN) 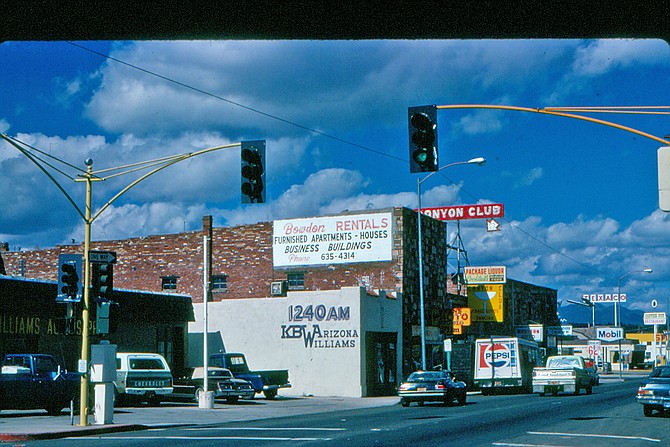 Prior to the I-40 bypass, all Route 66 vehicle traffic came through Williams. The October 1984 bypass immediately changed the character of downtown Williams. (photo/WGCN archives)

In 1984, the city of Williams went down in history as the last Route 66 town to be bypassed by Interstate-40. As predicted, many Williams businesses struggled as traffic circumvented the town on the newly constructed interstate, and the streets of Williams became quiet.

But this wasn’t the first time the town had seen significant change. Long-time residents witnessed the rise and fall of the logging industry and experienced the fallout of the railroad bypass in the 1960s.

But city officials and old-timers were concerned. They had witnessed the demise of the once-bustling towns of Seligman and Ash Fork and saw those communities become nearly ghost towns when they were bypassed by I-40.

“I didn’t bother going to the highway for the (I-40 opening) celebration,” said historian Al Richmond. “The town did die, businesses closed up rapidly thereafter.” 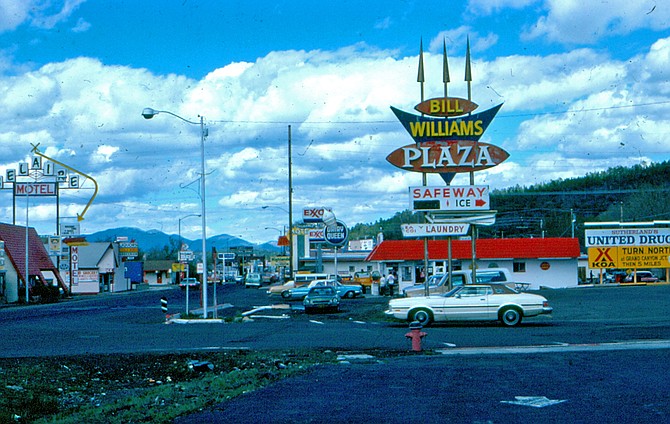 In 1981, many businesses in Williams focused on through traffic on Route 66. (photo/WGCN)

Residents who were here during that time saw an abrupt change in the downtown area. Semi-trucks and near constant traffic was there one day and gone the next. A gloom settled into the area and business after business began to close.

As the downtown community worked to stay alive, the Grand Canyon railroad sat quietly unused. The Grand Canyon railway had been a part of Williams since the late 1800s, but people’s love for the automobile and the ease of trucking made the railway almost obsolete. The last passenger train ran in 1968 and the last cargo train in 1974.

But many in the community of Williams knew there was potential in the Grand Canyon Railway, and several local officials and residents fought to keep the line from being dismantled.

“Rail passenger service to the Canyon was stopped in 1968. Shortly thereafter, consideration of removal of the tracks became a very real and serious threat. This community, however, has maintained a continuous 17-year struggle to prevent the loss of this resource to the community and our state. We will continue to seek its restoration and rehabilitation.”

~ Statement from the city of Williams during talks of restoring the Grand Canyon Railway in 1987.

In 1980, Atchison, Topeka and Santa Fe Railway (ATSF) began looking for a contractor to begin salvage work on the line, but some in Williams were not yet ready to abandon the rail line. Several promoters approached ATSF and the city of Williams with ideas for reinstating the railway, but none had come to fruition.

“John Moore was Marshall at that time and he made sure the individuals, the salvagers who wanted to take the railroad apart, weren’t able to compete that,” Richmond said. 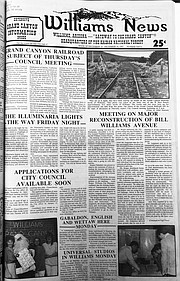 The city of Williams was involved with discussions of the purchase of the Grand Canyon Railway in 1987. (WGCN/archives)

During a 1987 city council meeting addressing the future of the railway, city officials said, “Rail passenger service to the Canyon was stopped in 1968. Shortly thereafter, consideration of removal of the tracks became a very real and serious threat. This community, however, has maintained a continuous 17-year struggle to prevent the loss of this resource to the community and our state. We will continue to seek its restoration and rehabilitation.”

Railroad Resources was contacted by ATSF for salvaging, and the president of the company saw the potential of the railway as a tourist attraction and for $4.35 million purchased the 1,781 acres which included the right-of-way, the Fray Marcos Hotel, the Williams’ station and additional adjacent property.

The community of Williams got excited about the possibility of the revitalization of the railroad, but Railroad Resources ran into financial trouble because of a lack of investors and folded. However, one of the investors, businessman Max Biegert, took an interest in the project. Biegert had acquired the upper 20 miles of track, from Tusayan to the Grand Canyon, during Railroad Resources’ foreclosure, and after meeting with Williams city officials and other stakeholders, Biegert purchased the remainder of the track and property. 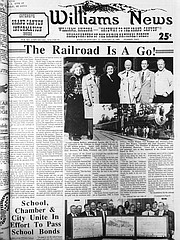 Max and Thelma Biegert announce their plans to revitalize the Grand Canyon Railroad in January 1989. (WGCN/archives)

Biegert initially invested $15 million to revitalize the train to the Grand Canyon. Throughout 1988, Biegert, his wife Thelma and several officers and consultants took to planning. In January 1989, the group announced that the Grand Canyon Railway would run its first train from Williams to the Grand Canyon on Sept. 17 to commemorate the 88th anniversary of the first passenger train in 1901.

Work began in earnest as tracks were repaired and upgraded, and engines and cars were acquired. The group also planned to renovate the historic Fray Marcos Hotel to become the new Williams depot.

It was a very hectic time,” said Richmond, who worked public relations for Biegert. “My wife was also involved. My days were like 18-hour days.”

The original plans outlined an eight-year project that would include a spur from the railway to the Grand Canyon airport in Tusayan, two hotels, an Old West theme park and top-notch maintenance facilities. The complete project was estimated at $80 million. 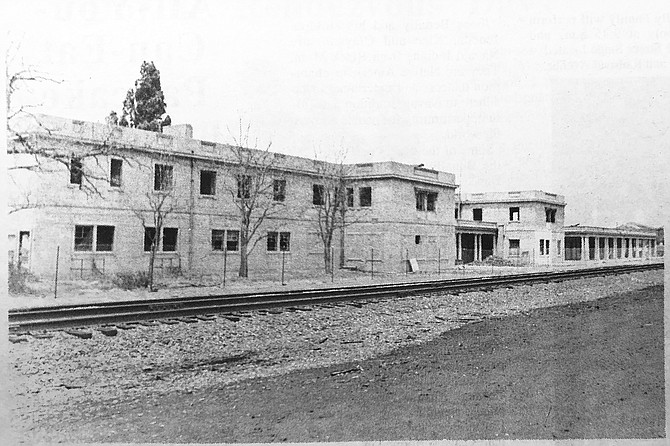 The Fray Marcos Hotel had not seen maintenance in years and had fallen into disrepair prior to its purchase in 1989. (WGCN/archives)

Since the tracks and bridges had not seen maintenance since 1974, considerable work was needed to restore the line. Not only did crews need to upgrade the railroad bed, but thieves had stolen nearly one mile of railroad ties that needed replacing. This added up to about 30,000 ties. The entire line needed reballasting, several roadbed washouts needed refilling and trees needed removal.

The Fray Marcos Hotel had been heavily vandalized over the years and sustained significant roof damage. Bricks and boards had covered the windows but vandals had managed to force their way in and spray painted the interior, broke windows and doors, and ripped out plumbing fixtures. The flat roof created a pool for water which damaged railroad artifacts and infrastructure.

While this work was being done, the company began searching for the locomotives and personnel to run the train. Through the consulting of experienced engineer Will Ambrose, enginemen were acquired from across the country.

Along with the rebuilding, marketing and sales services were organized. The reintroduction of the railway also garnered a lot of media attention.

As the crews pushed for the September reopening, enthusiasm grew with several thousand people appearing for the inaugural run. 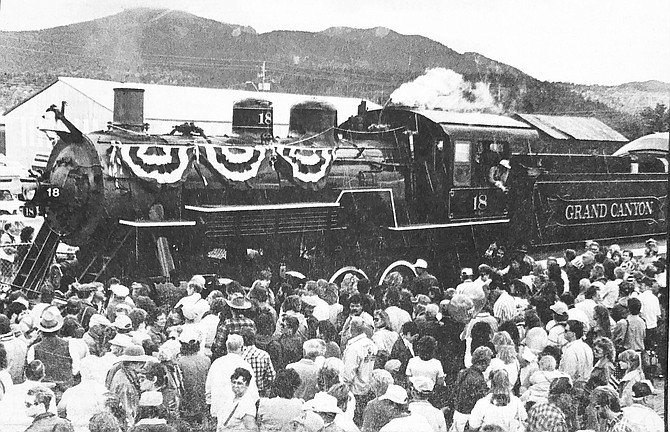 Thousands of spectators came to the inaugural run of the Grand Canyon Railway on Sept. 17, 1989. (WGCN/archives)

The reopening events included a keynote address by Arizona Governor Rose Moffett, music by the Northern Arizona University band, a dedication of the railway museum, a panel discussion, giveaways and a gold spike ceremony at the South Rim of the Grand Canyon.

Williams comes back to life

The years following the reopening were the start of a slow resurrection of the town of Williams. Some thought the I-40 bypass was the death of Williams. 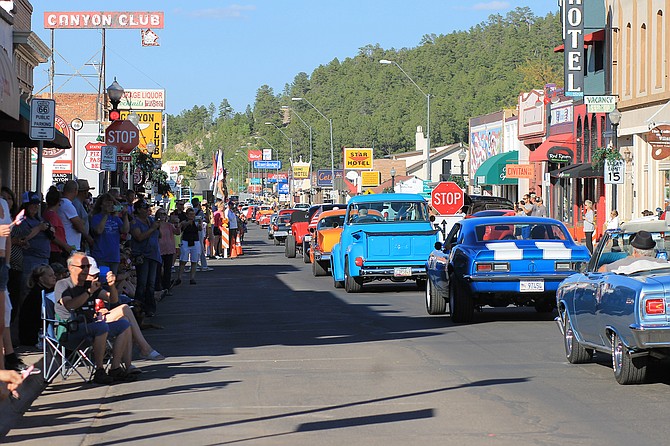 Williams has evolved in the past 30 years where it is not only a stop on the way to the Grand Canyon, but a destination that has numerous events, a cowboy culture, historic Route 66 and newer businesses such as Grand Canyon Railway and Bearizona. (Wendy Howell/WGCN)

“The movers and the shakers, so to speak, just sort of gave up and said ‘we aren’t going to have any more business,’” said Mayor John Moore. “Once the by-pass happened the town went into a fairly steady decline.”

The railroad did make an impact, but it wasn’t immediate.

“The first year was a trial period to see how the Railway could work with the town and vise-versa,” Richmond said. “Businesses slowly came alive again, but it took quite a while and the town is still growing.”

Some believe that if it weren’t for the railway, Williams wouldn’t be where it is today.

“If the Railway had not come when it did, I don’t know where we would be today,” Moore said. “There’s no doubt it brought a lot of people to town. We had a lot of people in the spring and fall, but now it’s more consistent year round.”

Moore said he also believes as the railway became more successful it inspired others to bring businesses to town.

“When the railway came, several businesses were concerned that it would be too big and take all the business,” Moore said. “But I think without the Grand Canyon Railway and later Bearizona, I don’t where we would be. I can assure you we wouldn’t be as economically sound as we are now.”

More information about Grand Canyon Railway is available at thetrain.com.

A short history of the Grand Canyon railway

According to historian Al Richmond in his book “The Story of Grand Canyon Railway: Cowboys, Miners, Presidents and Kings,” Prescott resident William Owen “Buckey” O’Neill was instrumental in aquiring a railroad that went from Williams to the Grand Canyon, with a two-fold interest in creating the line for the transportation of ore and creating accessibility to the canyon.

“My idea being that if incorporated in the folders of the Santa Fe it would give the Canyon an individuality and attractiveness that it does not now possess for the ordinary traveler who regards it when looking at the map as merely a barren waste,” O’Neill said in a letter the E.P. Ripley, president of the Santa Fe Pacific Railroad in 1895.

O’Neill was killed while serving as Rough Rider in the Spanish American War and never saw the completion of his dream. But in 1901, the Grand Canyon Railway, a subsidiary of the Atchison, Topeka and Santa Fe Railway, was completed and the railway quickly transformed the Grand Canyon from a rural camp only attained by stagecoach to an easily accessible destination where tourists could travel in relative comfort.

The Grand Canyon became a National Park in 1919, and tourists took advantage of the Williams to Grand Canyon train. But the advent of the automobile began to change things for the railway, and by 1927 there were more visitors driving automobiles to the park than taking the train.