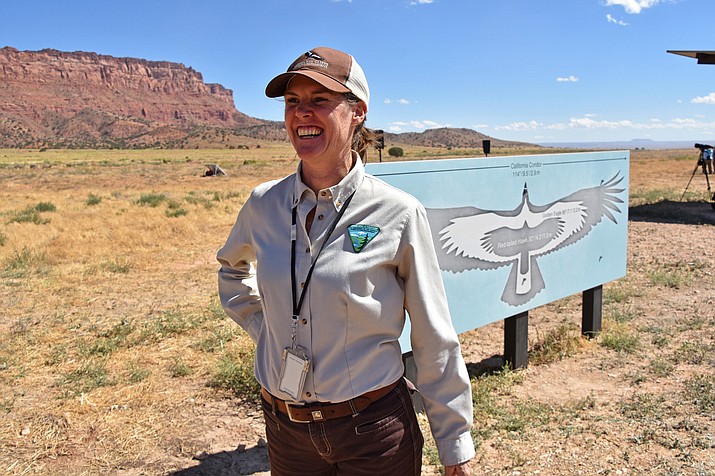 A BLM employee takes part in the release of four condors Sept. 28. The release included, a female and male that hatched in the spring of 2018. (Photo/Bureau of Land Managment) 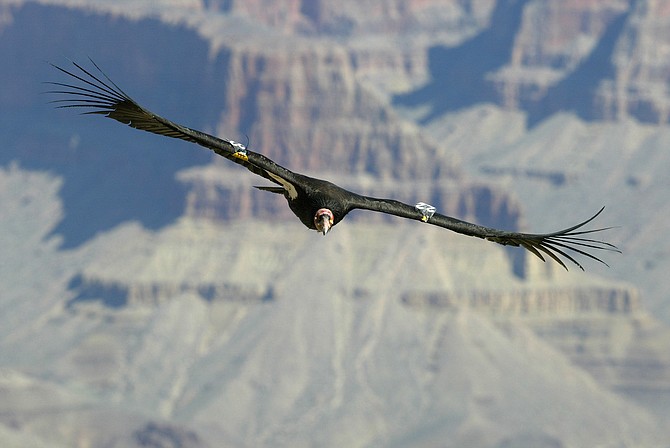 Four captive bred condors are released into the wild as part of a 23-year process to restore an endangered condor population in the U.S. (Chris Parrish/Peregrine Fund)

The event was the culmination of a 23-year-long effort to help the endangered species recover and become the wild, free flying creatures they once were. Making its way back from a population of only 22 worldwide in 1982, today California condors are a population of 500 strong worldwide with 96 flying free over Arizona skies.

All four juveniles were hatched at the Peregrine Fund’s World Center for Birds of Prey in Boise, Idaho.

Janette Benziger of Apache Junction, Arizona brought her 14 year old grandson, Orion, from Mesa, Arizona to watch the release. Anxiously waiting to watch the young condors take flight, Janette and Orion sat on lawn chairs at the condor release site near the base of the Vermilion Cliffs with binoculars trained on the mesa top.

“It’s just so moving to be able to see them soaring in these skies,” Janette said. As a grandmother, she values passing along her love for the outdoors and nature to the next generation. She wanted her grandson to “experience what the parks and recs and all the foundations and non-profits can do in Arizona to help maintain our condor species in the wild — not always in zoos, not in help centers — but to be able to fly free like they are meant to,” said Janette. For Orion, watching the birds soar above reminded him of our role and place in relation to nature and the ecosystem. “It makes me feel small,” Orion said, “to see them fly is really cool—it lets you know you’re not the biggest thing around in nature.”

Arden and Victoria Redshirt, Oliver Williams and Shoshauna Yazzie brought their families with small children to the event because they wanted to be a part of something bigger. The kids enjoyed coloring and making buttons to remember the condors and the event by and smiled from ear to ear when showing others their hand-made badges. 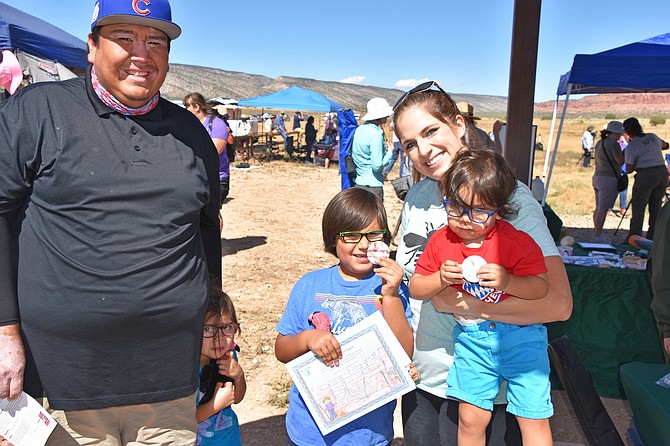 Field crews from the Peregrine Fund work hard to prepare the condors for their release. But for Peregrine Fund staff like Chris Parish, Director of Global Conservation, the most exciting part of the event is interacting with the people who travel from as far away as Vermont to support the recovery effort. “What I get more excited about is seeing the enthusiasm and excitement from everyone who come to see the condors fly free for the first time,” said Parish. “For the crew who are on the ground working with the condors every day to be able to see at this event that their work does resonate for people — it makes it all worthwhile, to know that people care and are listening.”

Vermilion Cliffs National Monument Manager Brandon Boshell most enjoys interacting with the public and partners, and being able to see the success in the recovery of the condors. Boshell takes pride in the agency’s role as a partner in helping the condors recover by providing a safe environment and landscape for their introduction into the wild.

Information provided by the Bureau of Land Managament