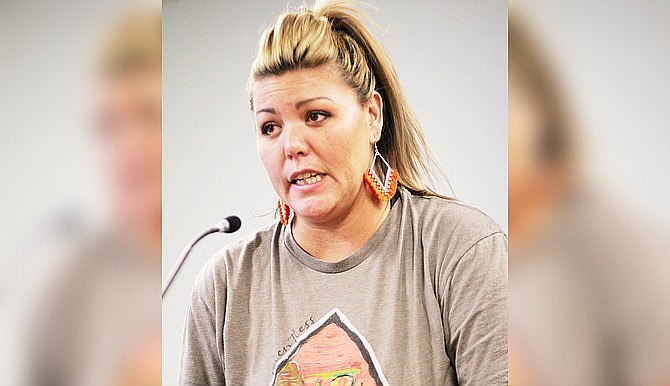 Mary Phelps, Camp Verde Arena Association President, talks to the Camp Verde Town Council at Wednesday’s meeting. Council voted 7-to-0 for the town to allocate as much as $250,000 of Capital Improvements budget to the association toward the build of the equestrian center on SR 260 east of Verde Ranger Station near the Camp Verde Sports Complex. VVN/Bill Helm

CAMP VERDE – At an August work session, the Camp Verde Town Council decided that as much as $250,000 should go toward the Camp Verde Arena Association’s efforts to build an equestrian center.

Last week, council voted 7-to-0 to officially direct the money from the town’s Capital Improvements budget for fiscal year 2019-2020.

“There was some question as to whether or not the direction given to Town Manager [Russ Martin] at the work sessions covering these items were enough to solidify council’s authority through the town manager for budgetary purposes,” council’s Oct. 2 agenda packet stated. “This [agenda] item was requested to ensure clarity about the direction to the town manager that has been given.”

The $250,000 would allow the Association to have the arena ready for a January 2020 event, Arena Association President Mary Phelps told council.

The town’s financial commitment is, in essence, a cap of capital funds for the 2019-2020 fiscal year, Councilor Joe Butner said before council’s vote.

“Unless there are other approvals,” he said.

The $250,000 would go toward engineering, clearing and grubbing, grading, electric, arena installation and a vendor/restroom building, according to a spreadsheet the Arena Association provided council in August,

Also according to the spreadsheet, the Arena Association is projecting an additional $260,000 in costs toward bleachers, arena installation, fencing, announcer stand, a second arena, ticket building, speaker system and arena tractor.