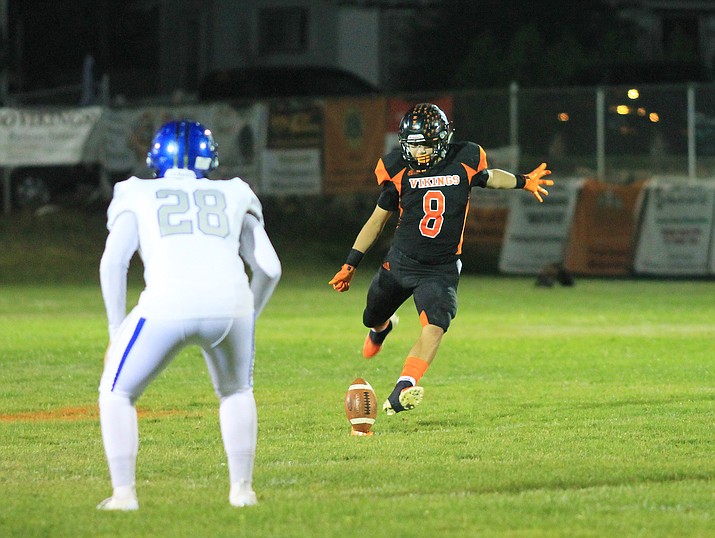 WILLIAMS, Ariz. — The Williams Vikings dominated their game on the road with Mogollon Sept. 27, coming up with at 38-6 win.

Head Coach Jeff Brownlee said the win was largely due to the Vikings strong defensive line.

“We played great defense,” Brownlee said. “Our defense shut their offense down and made them pass probably more than they wanted to.”

“It is a great program and its always nice to go there and get a solid win and return home,” he said.

Brownlee said despite the score, Mogollon was a tough competitor.

“We had to work at it,” he said. “We played very well upfront but they played every play hard. It was another good test for us.”

The Vikings got on the scoreboard quickly with a Chance Pearson 40-yard run and a Kolby Payne to Angel Ayala pass to bring the team up 14-0 at the beginning of the second quarter.

Prior to the half, Pearson ran another 20 yards for a touchdown and Payne-Ayala completed a 2-point conversion to go into the half leading 22-0.

After the half, Alex Garrett ran the ball 75 yards for a touchdown that was followed by a John Bryant 2-point coversion.

Payne connected with David Lozano for another touchdown, and Garrett made the 2-point conversion to bring the Vikings ahead 38-0 with 11:55 left in the game.

The Mustangs snuck in a fourth quarter touchdown, but the Vikings took the win 38-6.

The Vikings next play Mayer on the road Oct.4.